Trump warns Iran: Never, ever threaten US again, or you will face consequences | The Indian Express

Trump warns Iran: Never, ever threaten US again, or you will face consequences | The Indian Express

Trump warns Iran: Never, ever threaten US again, or you will face consequences 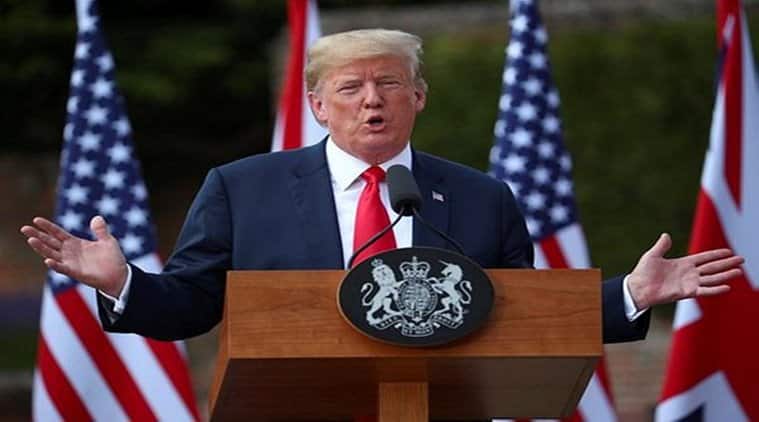 US President Donald Trump. (File)
US President Donald Trump on Monday retaliated to Iranian supremo Hassan Rouhani’s “mother of all wars” threat, saying the middle-eastern nation will have to suffer dire consequences if it tried to cross the US. Trump was reacting — on Twitter, in capital letters — to Rouhani’s statement where he had cautioned the US for its hostile policies against Tehran ever since it withdrew support from the 2015 international deal over Iran’s nuclear programme.
“To Iranian President Rouhani: Never, ever threaten the United States again or you will suffer consequences the likes of which few throughout history have ever suffered before. We are no longer a country that will stand for your demented words of violence & death. Be cautious!” Trump tweeted.
This is a modal window.

Trump visits UK: Did he threaten trade deal?
U.S. President Donald Trump and British Prime Minister Theresa May are confronting a tabloid interview in which the American is quoted as saying that May's leadership failings "will probably kill" chances of a new trade deal between the countries.
In a gathering of diplomats on Sunday, Rouhani had accused the US of destabilising his government and said America should know that peace with Iran is the mother of all peace while a war with Iran is the mother of all wars. He had also warned the US leader not to “play with the lion’s tail”. Rouhani had also affirmed that the country will continue to have economic ties with other nations despite the US-imposed sanctions.
On Sunday, Secretary of State Mike Pompeo called the religious leaders of Iran “hypocritical holy men” who amassed vast sums of wealth while allowing their people to suffer. Addressing a crowd of Iranian Americans, Pompeo had said that the people of Iran had been living under a tyrannical rule since the last 40 years and the US stands by their protest. His address came on the 40th anniversary of Iran’s Islamic revolution, the event which marked the beginning of its strained ties with the West.
For all the latest World News, download Indian Express App
© IE Online Media Services Pvt Ltd
Publicado por salud equitativa en 6:17