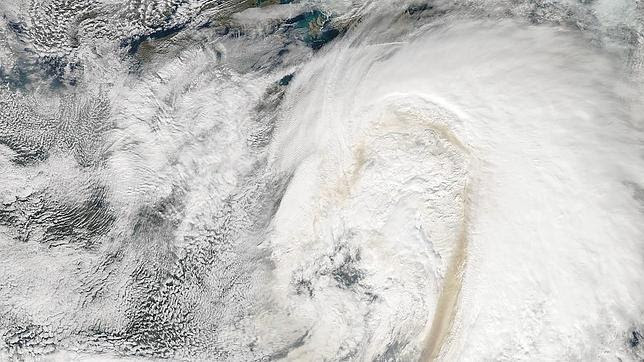 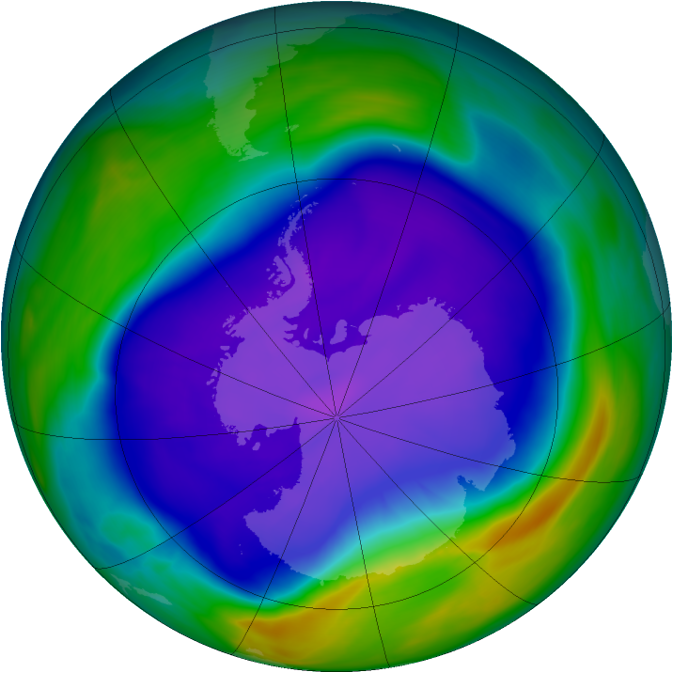 Satellites observed the largest ozone hole over Antarctica in 2006. Purple and blue represent areas of low ozone concentrations in the atmosphere; yellow and red are areas of higher concentrations.
Image Credit:
NASA

NASA research shows Earth's atmosphere contains an unexpectedly large amount of an ozone-depleting compound from an unknown source decades after the compound was banned worldwide.

Carbon tetrachloride (CCl4), which was once used in applications such as dry cleaning and as a fire-extinguishing agent, was regulated in 1987 under the Montreal Protocol along with other chlorofluorocarbons that destroy ozone and contribute to the ozone hole over Antarctica. Parties to the Montreal Protocol reported zero new CCl4 emissions between 2007-2012.
However, the new research shows worldwide emissions of CCl4 average 39 kilotons per year, approximately 30 percent of peak emissions prior to the international treaty going into effect.
"We are not supposed to be seeing this at all," said Qing Liang, an atmospheric scientist at NASA's Goddard Space Flight Center in Greenbelt, Maryland, and lead author of the study. "It is now apparent there are either unidentified industrial leakages, large emissions from contaminated sites, or unknown CCl4 sources."
NASA video discusses new research that shows Earth's atmosphere contains an unexpectedly large amount of an ozone-depleting compound from an unknown source decades after the compound was banned worldwide.
As of 2008, CCl4 accounted for about 11 percent of chlorine available for ozone depletion, which is not enough to alter the decreasing trend of ozone-depleting substances. Still, scientists and regulators want to know the source of the unexplained emissions.

For almost a decade, scientists have debated why the observed levels of CCl4 in the atmosphere have declined slower than expectations, which are based on what is known about how the compound is destroyed by solar radiation and other natural processes.
"Is there a physical CCl4 loss process we don't understand, or are there emission sources that go unreported or are not identified?" Liang said.
With zero CCl4 emissions reported between 2007-2012, atmospheric concentrations of the compound should have declined at an expected rate of 4 percent per year. Observations from the ground showed atmospheric concentrations were only declining by 1 percent per year.
To investigate the discrepancy, Liang and colleagues used NASA's 3-D GEOS Chemistry Climate Model and data from global networks of ground-based observations. The CCl4 measurements used in the study were made by scientists at the National Oceanic and Atmospheric Administration's (NOAA's) Earth System Research Laboratory and NOAA's Cooperative Institute for Research in Environmental Sciences at the University of Colorado, Boulder.
Model simulations of global atmospheric chemistry and the losses of CCl4 due to interactions with soil and the oceans pointed to an unidentified ongoing current source of CCl4. The results produced the first quantitative estimate of average global CCl4 emissions from 2000-2012.
In addition to unexplained sources of CCl4, the model results showed the chemical stays in the atmosphere 40 percent longer than previously thought. The research was published online in the Aug. 18 issue of Geophysical Research Letters.
"People believe the emissions of ozone-depleting substances have stopped because of the Montreal Protocol," said Paul Newman, chief scientist for atmospheres at NASA's Goddard Space Flight Center, and a co-author of the study. "Unfortunately, there is still a major source of CCl4 out in the world."
NASA monitors Earth's vital signs from land, air and space with a fleet of satellites and ambitious airborne and ground-based observation campaigns. NASA develops new ways to observe and study Earth's interconnected natural systems with long-term data records and computer analysis tools to better see how our planet is changing. The agency shares this unique knowledge with the global community and works with institutions in the United States and around the world that contribute to understanding and protecting our home planet.
For more information about NASA's Earth science activities in 2014, visit:
http://www.nasa.gov/earthrightnow
For information on the Antarctic ozone hole, visit:
http://ozonewatch.gsfc.nasa.gov
-end-
Steve Cole
Headquarters, Washington
202-358-0918
stephen.e.cole@nasa.gov
Kathryn Hansen
Goddard Space Flight Center, Greenbelt, Md.
301-286-1046
kathryn.h.hansen@nasa.gov
--