To put Kerala back on its feet | The Indian Express

To put Kerala back on its feet | The Indian Express 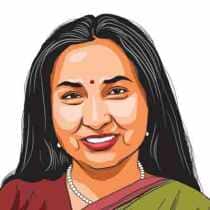 To put Kerala back on its feet

After the floods, women’s group farms hold the key to reviving rural livelihoods. 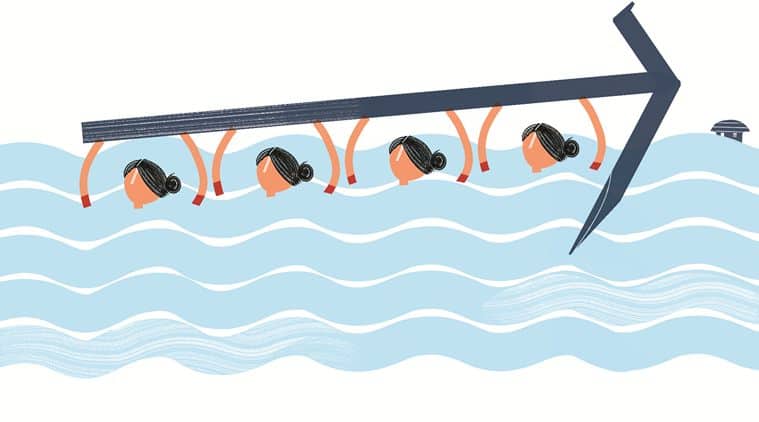 Women’s group farms can play a critical role in rebuilding Kerala’s rural livelihoods. Reviving them should thus be prioritised by the state government. (Illustration: CR Sasikumar)
During last year’s Onam festival, women cultivating bananas in their group farms in Thrissur district — one of the worst affected by Kerala’s floods — would have reaped a substantial profit, and used it for investments, home needs, or gifts for their families. This year their fields lie in ruin. If Kerala has to truly recover, it needs to restore the flourishing livelihoods that existed prior to the floods, especially those built on women’s labour. Indeed, just as women’s groups are the backbone of the ongoing cleaning drives in Kerala’s cities, so women’s group farms can provide the key to reviving Kerala’s rural livelihoods.
Over the past 20 years, Kerala has set in place a unique system of group farming. In 2016, there were over 62,000 such farms across all 14 of Kerala’s districts. Constituted of four to10 members, the groups lease land and members pool their labour and capital to cultivate jointly, taking decisions collectively, and sharing costs, risks and returns equitably.
Although the idea of group farming is not new, earlier efforts — globally and in India — were largely failures, both under the coercive collectivisation of former socialist regimes and the poorly conceived 1950s/’60s efforts in post-colonial developing countries, including India. Since then, we have advanced greatly in our understanding of successful collective action. Kerala’s group farms embody basic principles: They are voluntarily formed, small sized, participative, and egalitarian.

Constituted of women belonging to village neighbourhood groups, the farming groups are linked to area development societies at the ward level and community development societies (CDSs) at the panchayat level. Each CDS is registered as an independent society. They are supported by the State Poverty Eradication Mission or Kudumbashree Mission (K Mission), and the Kudumbashree network of CDSs (K network). This institutional structure provides the resilience which physical infrastructure alone cannot.
Conceptually, we would expect resource pooling for group farming to have many advantages: More investible funds, scale economies, skill diversity, saving on hired labour, greater bargaining power in markets, etc. We would thus expect them to perform better than small family farms. But does that happen in practice?
To assess this, I studied 250 farms in Thrissur and Alappuzha over 2012-14. The sample contained 69 women’s group farms and 181 individual small farms (95 per cent male managed) for which weekly data were collected for each crop’s outputs and inputs (including labour) over 12 months. In-depth focus on group discussions provided qualitative insights. How well did the groups perform, relative to individual farms, in productivity and profits? Strikingly well, overall.
The full results are given in my paper “Can group farms outperform individual family farming” (World Development, 108:57-73, 2018), but consider some highlights given in Table 1. The annual value of output per gross cropped hectare is 1.8 times higher for group farms than individual family farms. Those growing bananas in Thrissur have 1.6 times higher yields (Rs/ha) than individual farms. After controlling for inputs in my regressions, the banana yields of group farms were 348 per cent higher than of individual farms.
Similarly, in net returns, calculated by subtracting all paid out costs from the total value of output, but without imputing values to owned land or family labour, 82-84 per cent of both group and individual farms got positive returns. But the net returns per farm for the groups, as we can see, were five times more than those for the individual farms, and almost three times more than the state average of Rs 42,500 in 2012-13. Also 38 per cent of the group farms earned over Rs 50,000 in net terms.
Although all farmers calibrate their harvests and sales to get the best banana prices during festivals, women’s groups worked the market with particular success. Some negotiated contracts with temples for special banana varieties. As a group, they could assure quality produce in adequate quantities to fulfil the contract. This underlies the sizable potential of group farming in high value commercial crops. Only in paddy — measured for Alappuzha farmers — were group farms at some disadvantage, since the women depend on leased land, and most high quality paddy land is self-cultivated by male owners.
The women used their earnings for investment, purchasing household goods, children’s education, health-related expenditure, or settling family debts. But notably, some Thrissur groups made enough profit to buy land collectively. Many of these women were earlier home bound with limited exposure to public institutions. They learnt to deal routinely with banks, agricultural extension services, land and input markets, and panchayats. Effectively, they moved from being mere farm wives to farm managers.
These achievements have not come easily. The biggest challenge is land access. Although, on average, women’s groups in the sample cultivated 1.22 hectares (ha) while individual farms cultivated 0.48 ha, the latter largely own this land, while 87 per cent of the groups lease most or all of theirs from non-group members. This involves high transaction costs and acquiring good land in a single plot is difficult. The absence of written leases also deprives the groups of government subsidies and crop insurance in case of crop failure.
At the same time, the institutional structure, under which Kerala’s group farming functions, has provided important support, especially to help women overcome entrenched gender biases. The K Mission and K Network facilitate technical training, including for organic farming and new vegetables, efficient input use, area and production incentives and subsidised credit through NABARD. Being educated no doubt helps women in their learning process, information access and market dealings.
Given that the floods washed away innumerable fields, we cannot say yet how these farmers and their families have fared, or how intact their groups are. What we can, however, say is that women’s group farms can play a critical role in rebuilding Kerala’s rural livelihoods. Reviving them should thus be prioritised by the state government. High yields require not just physical infrastructure but also institutions. Kerala’s institutions, especially its group farms, can provide a foundation for recovery. Indeed an important indicator of recovery should be the returns on women’s group farms. Only when they reach — or can better — the levels of production and profits they had before the disaster struck, can we say: The state is indeed back on track.
The writer is professor of development economics, GDI, University of Manchester (UK) and former director, Institute of Economic Growth, Delhi
For all the latest Opinion News, download Indian Express App
More From Bina Agarwal