'We don’t apologize for America anymore’

President Donald J. Trump will meet with the President of the European Commission to discuss fairer trade deals that strengthen America’s farmers and manufacturers.
More: Under President Trump, look at what’s happening in America’s heartland.

‘We don’t apologize for America anymore’

President Trump promised to make honoring our veterans one of the top priorities of his Administration. Part of that promise means restoring American patriotism. “We don’t apologize for America anymore. We stand up for America,” the President told the Veterans of Foreign Wars national convention yesterday in Missouri.
“And we stand up for our National Anthem,” the President said to a thundering ovation.
Another part of that promise is making sure that our veterans receive the best healthcare in the world. That begins by holding the VA system accountable for misconduct and poor performance. Last June, President Trump signed the VA Accountability and Whistleblower Protection Act into law, making it easier to discipline bad actors, including senior executives.
The VA took more than 3,200 accountability actions—which include removals, suspensions, and demotions—from the beginning of the Trump Administration through the end this May. All told, those actions resulted in more than 2,500 removals from the system.
See the 3 big ways President Trump is honoring our veterans’ service.
Watch: “We stand up for our National Anthem.”

Religious persecution in Iran and China must end

Around the world, religious minorities are persecuted and stripped of human rights, Secretary of State Mike Pompeo wrote yesterday. “We need to hear the stories of those persecuted, tortured, falsely imprisoned, and killed for their faith. We can honor their sacrifices by preventing these atrocities from happening again,” he writes.
President Trump is taking action. This week, the State Department is bringing together religious leaders, survivors of persecution, and delegations from foreign governments for the first-ever Ministerial to Advance Religious Freedom. Vice President Mike Pence and other senior Administration officials will be in attendance.
The goal is simple: to promote the God-given human right to believe what you choose.
The persecution of Christians, Jews, and Sunni Muslims must end. 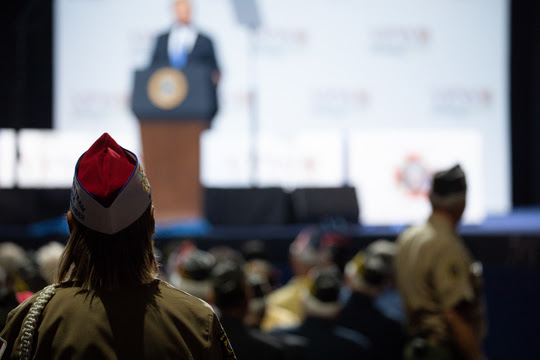