Tearing down barriers to work

President Donald J. Trump hosts Made in America Day at the White House, celebrating products made in the United States. Watch live at 3 p.m. ET.

Tearing down barriers to work

“We must tear down unnecessary barriers to work,” Labor Secretary Alex Acosta wrote Friday. “Excessive licensing forces individuals, like barbers, teachers and nurses, who move from state to state, to give up their career or retake certifications and pay high fees to get back to work.” He called on states to reevaluate their approaches.
On the heels of last week’s Pledge to America’s Workers, where more than 20 companies committed to investing in 3.8 million opportunities for our Nation’s workforce, Secretary Acosta ran through the myriad other ways the Trump Administration is expanding opportunity for all Americans:

• The President has restored a commonsense approach to regulation, which should “focus on protecting health and safety,” Secretary Acosta says.

• The Administration is helping transition Americans who are reentering society from prison to jobs, releasing $84.4 million in grants to community groups.

• A new Executive Order in May helps alleviate the burden for military spouses as their families are reassigned from one state to another.

• Thanks in part to tax cuts and reform, record unemployment lows were set for African-Americans, Hispanic-Americans, and Asian-Americans.

Secretary Acosta: The time to invest in the American workforce is now.
More: What the Pledge to America’s Workers means

Friday marked Space Exploration Day, which commemorates the 1969 landing of the lunar module Eagle. Six hours after it touched down, Neil Armstrong became the first human in history to walk on the surface of the Moon.
“Since I took office, my Administration has refocused our Nation’s space program on returning to the Moon, growing space commerce, leading the way for a human mission to Mars, and unveiling the secrets of our universe,” President Trump wrote Friday. “The exploration and development of space represent the best of American values, and we seek to ensure those values have a permanent place beyond Earth.”
Read the President’s full message for Space Exploration Day.
More: America will once again reach for the Moon—and beyond 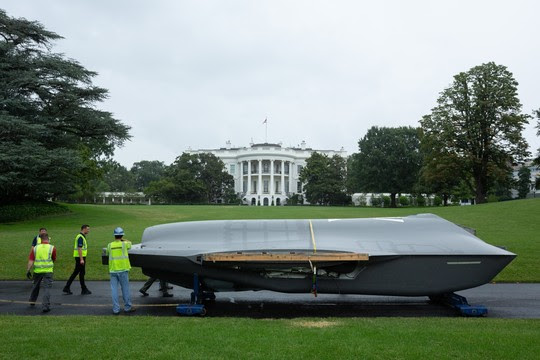 A section of the Lockheed Martin F-35 aircraft is delivered to the South Lawn of the White House for the Made in America Product Showcase | July 21, 2018
Publicado por salud equitativa en 13:20