Laying out the new constitution to lawmakers on Saturday, the secretary of the council of state, Homero Acosta, said it included the recognition of private property, something long stigmatized by the Communist Party as a vestige of capitalism. 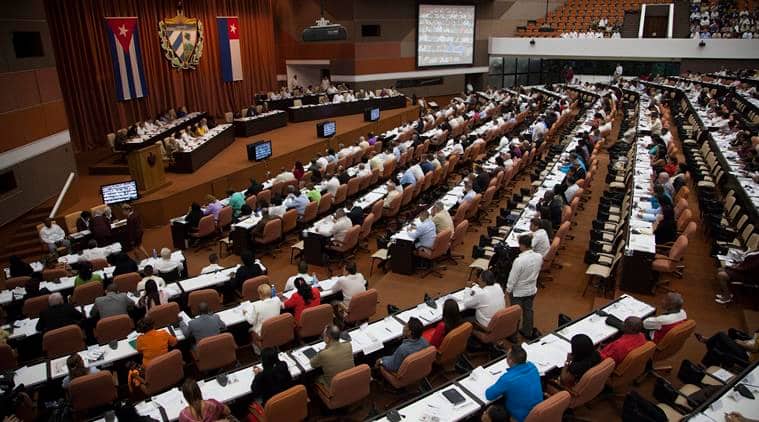 This month, Cuba issued regulations tightening control of the private sector and limiting business licenses to one per person. (Photo: AP)
A draft of Cuba’s new constitution omits the aim of building communism, recognises private property and opens the door to gay marriage, in a sign of changing times, although it keeps the Communist Party as the guiding force of the one-party system. Cuba’s national assembly is this weekend debating a draft of the document to replace its Soviet-era constitution, reflecting political, social and economic changes designed to make its brand of socialism sustainable and implementing new ones too.
Once lawmakers have approved the draft, it will be submitted to a popular consultation. The final document, which could include changes, will then be put to a national referendum.
This is a modal window.

Castro flanks new Cuban leader at May Day rally
In a show of continuity, Raul Castro stood side-by-side with his protege Miguel Diaz-Canel during Havana's May Day march on Tuesday.
The current draft omits a clause in the 1976 constitution on the ultimate aim of building a “communist society”, instead simply focusing on socialism.
“This does not mean we are renouncing our ideas,” the president of the National Assembly Esteban Lazo was quoted as saying by state-run media. Cuba had simply moved into a different era following the fall of the Soviet Union, he said.
“We believe in a socialist, sovereign, independent, prosperous and sustainable country.”
Laying out the new constitution to lawmakers on Saturday, the secretary of the council of state, Homero Acosta, said it included the recognition of private property, something long stigmatized by the Communist Party as a vestige of capitalism.
That change should give greater legal recognition to the micro businesses that have flourished in the wake of market reforms to the ailing state-run economy that have fostered a small but vibrant private sector and attempted to rake in more foreign investment.
Cuba’s current constitution only recognizes state, cooperative, farmer, personal and joint venture property. The draft also appears to strengthen political institutions and create a more collective leadership structure, after nearly 60 years of rule by late revolutionary leader Fidel Castro and his younger brother Raul Castro.
Castro, then 86, handed over the presidency in April to his mentee Miguel Diaz-Canel, 58, although he remains head of the Communist Party until 2021. He also heads the constitutional reform commission. Under the new constitution, the president will no longer be the head of the council of state and council of ministers.
Instead it creates the position of prime minister and designates the president of the assembly also as head of the council of state, Cuba’s highest executive body.
One of the other top items at Saturday’s assembly was the recognition in the draft constitution of marriage as between two individuals rather than a man and a wife.
The draft also sets an age and term limits for presidents, stating they must be under 60 when they first take office and can carry out no more than two consecutive five-year terms.
Reflecting the desired gradual generational transition in Cuba’s leadership, new President Diaz-Canel named his cabinet at the start of the assembly meeting on Saturday, promoting two officials in their fifties to become vice presidents alongside two sitting octogenarians and a septuagenarian.
Diaz-Canel kept a majority of ministers from Castro including in the key posts of defense, interior, trade and foreign relations, in line with his April promise to provide continuity.
Marino Murillo, the head of the Communist Party’s reform commission and previously one of the council of ministers’ vice presidents, was the only top figure omitted from the new lineup.
Under Castro, Murillo spearheaded changes to the state-run economy and he remains head of the Party’s reform commission and a member of the political bureau.
The reforms have slowed however in recent years amid fears they have allowed some Cubans to enrich themselves, fostering inequality, and weakened the control of the state.
This month, Cuba issued regulations tightening control of the private sector and limiting business licenses to one per person.
For all the latest World News, download Indian Express App
Publicado por salud equitativa en 6:33