Notes on a lynching | The Indian Express

Notes on a lynching | The Indian Express 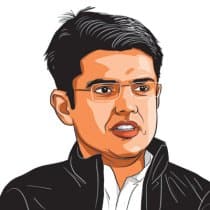 Notes on a lynching

Killing of Rakbar Khan took place in a state where people used to lend a helping hand across social divides. Akbar’s wife with their children. (Express photo/Hamza Khan)
The recent incident of mob lynching in Alwar has re-opened the festering wounds of Rajasthan’s failed administration. The killing of Rakbar Khan, the sole breadwinner of his family by cow vigilantes points to a series of ills that afflict the Vasundhara Raje regime. Actually, it is the lack of any form of governance which leads to such incidents. The saffron brigade, encouraged by the BJP and propelled by the RSS, has shown yet again the inhuman face of political hatred.
The number of incidents of mob lynching has been exceptional ever since Narendra Modi came to power in 2014. I don’t think it should matter what offence was allegedly being committed by those who were lynched. Taking the law in one’s own hands is completely against the law but today the saffron brigade sees itself as above the law. They know they can get away with anything, it is as if they have the protection of the political system. Mob lynching has to be viewed as a premeditated act. It’s not a spontaneous act of public rage. It derives nourishment from the favour offered by the administration. When Union minister Jayant Sinha garlanded those convicted of lynching upon their release, it spoke of the general ideology the BJP wishes to support and propagate. This is the first government which welcomes mob lynchers with garlands, paving the way for future lynchings.
Related News
The Supreme Court has been strongly critical of this phenomenon. The words which came from the highest court of justice were stern and expressed grave concern. On July 17, a Supreme Court bench headed by Chief Justice Dipak Misra termed incidents of mob-lynching in India as “horrendous acts of mobocracy” and directed Parliament to draft new legislation to effectively deal with the incidents across the country. The apex court directed the police to register an FIR under Section 153A of the IPC against those who indulge in such activities. While the Court asked the police to do everything in their power to ensure that social order was maintained, in the Alwar lynching case, the cops first took the cows to safety and only subsequently took the victim to hospital. It makes one wonder if the police and government are deliberately acting in defiance of the apex court’s order. I, for one, refuse to believe the theory that the poor and uneducated indulge in such acts. It is becoming increasingly clear that such criminal acts are executed thanks to political collusion, at least of the ideological kind.
As someone who has travelled extensively across the state in the last nearly 20 years, I can vouch for the bonhomie that exists between communities in Rajasthan. When the people are faced with any natural disaster, they lend each other a helping hand without thinking about the caste/religion divide. Various religious identities have been coexisting here for hundreds of years. But today, the party in power allows bloodshed just to prove a political point.
What they fail to realise is that the public has had enough. A state which is battling especially difficult weather conditions and lack of water already has a lot to deal with. Moreover, thanks to the false promises of the Raje government, there is widespread joblessness and poverty. The chief minister has ensured the shutting down of schools and even made strides in the privatisation of education.
The chief minister’s answer to incidents of lynching and mob violence can be summed up in one word: Tweets. She tweets about the “strictest possible action” which will some day be taken against the offenders. Unfortunately, that day of reckoning has not come even once in the last five years. Justice seems to be a distant dream. Union minister Arjun Ram Meghwal says, “The more Modiji becomes popular, the more such incidents will occur”. I have noticed that such comments, and even the CM’s superficially reassuring tweets, only add fuel to fire. Voters can seem naive and innocent but I want to assure Modiji that they are not foolish. They understand the falsehoods being churned out on a daily basis by the BJP.
We, as a country, have been reduced to a vulnerable lot since 2014 by the deliberate acts of communal hatred all around us. I believe that BJP president Amit Shah’s declaration of Vasundhara Raje’s name as the chief ministerial candidate for the next assembly election in Rajasthan would be the party’s biggest undoing. Raje has failed in striking a chord of affection and sympathy with the people. She has lost support from all sections of the society due to her perpetual absence in the time of the public’s need. Her policies have been few, weak and poorly implemented. The lacunae in governance have been noticed by people who live in the farthest corners of the state.
I am still hopeful that under a new sun, Rajasthan will be geared for a higher development and a much higher happiness index. I am hopeful that the new sun will shine brighter with Raje Raj’s imminent sunset.
The writer, a former Union minister, is president of the Rajasthan Pradesh Congress Committee
For all the latest Opinion News, download Indian Express App
More From Sachin Pilot