Not just Section 377, the law isn’t straight for a queer person in India | The Indian Express

Not just Section 377, the law isn’t straight for a queer person in India | The Indian Express

Not just Section 377, the law isn’t straight for a queer person in India

As the SC hears the petition against Section 377, there are certain issues that remain unanswered for a queer person. 'The Law isn't Straight: A Queer Person's Guide to Accessing Rights' is an attempt to help queer people navigate through their daily lives. 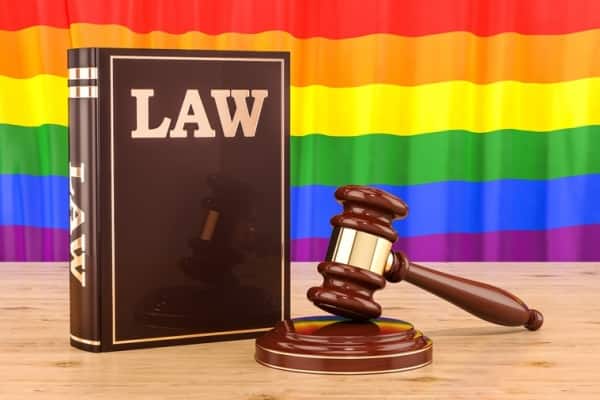 How the Indian law is problematic for a queer person and what can be done about it. (Source: Getty)
Can a trans-woman report sexual harassment at work against a colleague?Does a queer person have the right to claim property that belonged to their parents or other family members?Can a trans-person get their gender changed on the identity documents?
As Supreme Court hears the petition against Section 377, there are certain issues in the legal regime that remain unanswered for a queer person. The grey areas make living a simple life difficult for a queer person. From getting the right identity documents to opening a bank account, everything is full of hurdles. And the law is not only silent on this, but also fails to acknowledge the existence of LGBTQ+ people.
To address this problem and familiarise the queer people on how the law can be used to their benefit, Vidhi Centre for Legal Policy released a manual. ‘The Law isn’t Straight: A Queer Person’s Guide to Accessing Rights’ is an attempt to help queer people navigate through their daily lives by describing these challenges and proposing possible remedies. 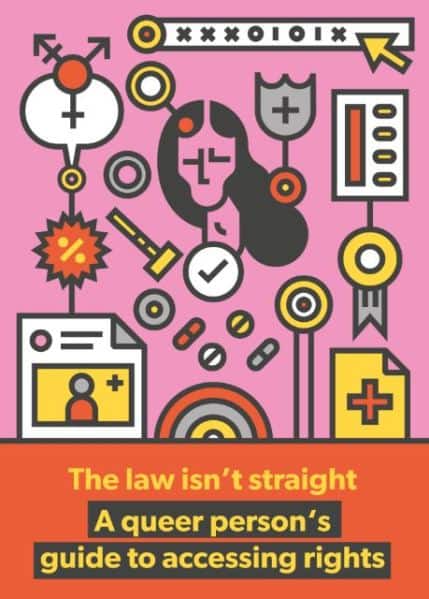 The manual is an attempt to help queer people. (Source: Screenshot)
Identity documents
Identity documents are essential for accessing the rights and benefits of the law, but updating them can be very difficult, particularly for transgender persons.
Namrata Mukherjee, the co-author of the manual, says Aadhar and voter ID cards are the easiest for a queer person. “They have the option of a third gender, but there have been so many cases where people have faced harassment because the society as a whole is very trans-phobic,” she says. 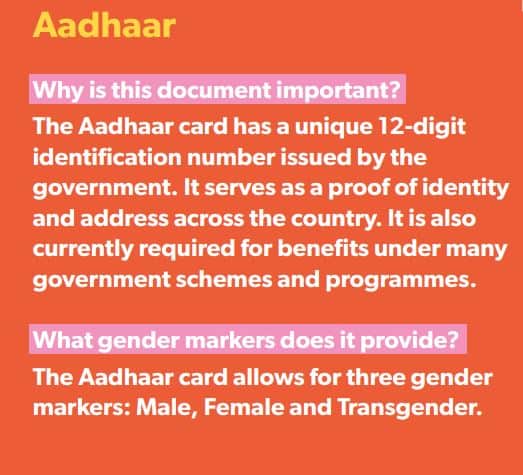 Why is Aadhaar important. (Source: Screenshot)
Healthcare
Since gender is not binary, and a person’s sexual orientation can vary from one end of the spectrum to another, everyone’s healthcare needs are different. But does India have provisions for the same?
“The fundamental problem is that the legal system in India presumes everyone is heterosexual and identify with the gender they are born with,” says Namrata. “Queer people are considered invisible by the society, hence there are no specific provisions for them. How can you have laws for someone who isn’t even recognised by the law? All we can do is innovatively use the laws that we have and make the day to day life better.”
One thing that everyone must remember is that, ‘medical professionals cannot refuse to treat you because of your gender or sexual orientation.’ Also, you can also approach the courts in case of deficiency in services or discrimination by your doctor.
Violence
Violence has become a part of daily life for a queer person. While the legal system is usually used against queer persons, it also has the potential to be employed against the perpetrators of violence.
So, can a trans-woman file a complaint if she is harassed? Yes, she can. “As the legal system does not explicitly say that the laws are applicable only to someone who is a female assigned at birth, a trans-woman can register a complaint,” Namrata says.
But here’s a downside – our law does not recognise male rapes. “Certain provisions such as rape, sexual harassment, stalking recognise only ‘women’ as victims,” Namrata says. How to file a complaint against sexual harassment. (Source: Screenshot)
Education
Queer people face most difficulties while updating one’s gender on school certificates, which can further complicate college admissions. “Each state has its own set of rules, and while most state boards allow change of name, changing gender gets difficult,” says Namrata.
“Even after the NALSA judgment, which says that a person has the right to self-identify themselves, people have to visit the courts and go through numerous procedures to get their gender changed. And that is the biggest problem,” she says.
Property
When it comes to property rights and inheritance, queer people face certain difficulties. Since laws in India only recognise heterosexual unions, it may be difficult for queer people to transfer property to their partners. However, it is possible to navigate through these challenges and make the person you want to inherit your property.
The manual hopes to draw attention to all the ways in which laws and policies make the lives of queer persons more difficult, in a hope to spur the reforms. In addition to this, it also provides strategies that LGBTQ+ persons can use till the time the law changes and becomes more inclusive.
You can read the entire manual here.
For all the latest Lifestyle News, download Indian Express App
© IE Online Media Services Pvt Ltd
Publicado por salud equitativa en 8:29