Migrant crisis: Better to drown than return to Libya | In English | EL PAÍS

Migrant crisis: Better to drown than return to Libya | In English | EL PAÍS

Better to drown than return to Libya

The “disembarkation platforms” being debated by the European Union already exist, and they are hell on Earth 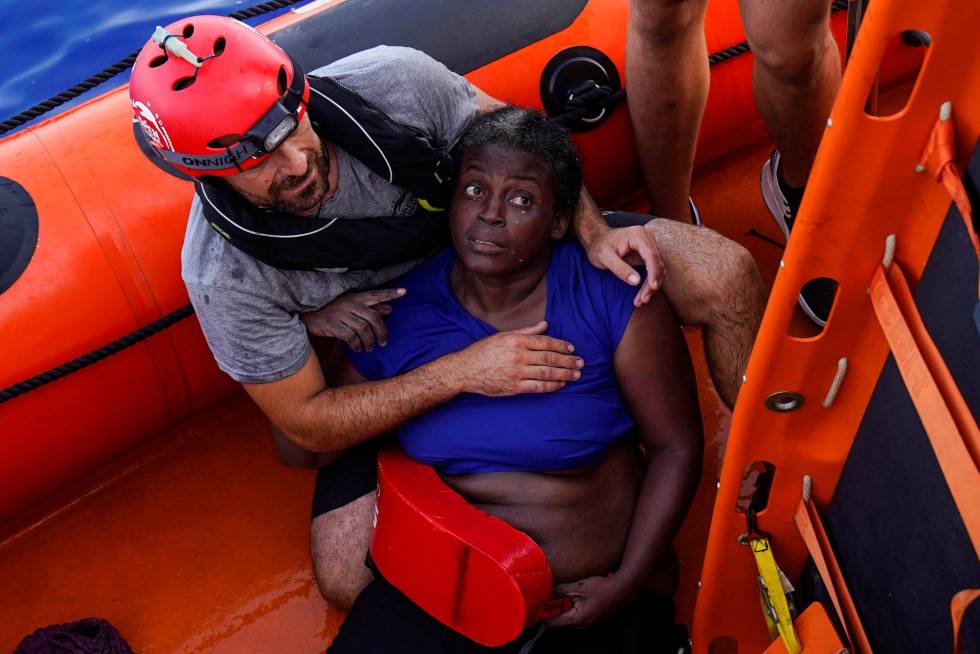 The woman rescued in the Mediterranean Sea on Tuesday. JUAN MEDINA REUTERS
European leaders are caught up in a game of euphemisms. They are debating on the advisability of creating “disembarkation platforms” and “return centers” in third countries to avoid getting their own hands stained by the creation of places of their own in which to detain and classify migrants. But the truth is that those centers already exist. Many of them are in Libya, and they are hell on Earth for everyone who ever dreamed of a better life in Europe – probably without realizing that capsizing or drowning were not the only torments that could befall them.

According to non-profit groups, some immigrants would rather risk their lives than return to the torture of Libya. This is what the Spanish aid groupProactiva Open Arms thinks happened to the two women and four-year-old child whom they found floating near the wreckage of a boat last Tuesday. They did not want to go back to Libya with that country’s Coast Guard, but the latter took back most of the group, left these three on the rubber dinghy, and destroyed it before sailing away, as a form of reprisal. One of the women and the child drowned. The second woman was rescued after clinging to a piece of driftwood for 48 hours. It is difficult to imagine the agony she must have gone through.
The tragedy playing out in the Mediterranean Sea – nearly 1,200 people drowned so far this year – brings shame to this Europe that acts shocked at violations of democratic rules and human rights. It is easy to blame the xenophobic and populist government of Italy, which has closed its doors to rescue ships, but the hard truth is that the European Union as a whole is ultimately responsible for so much cruelty.
A few days ago, EL PAÍS reporter Naiara Galarraga published the story of a migrant from Sierra Leone named Joshua who described the rape, torture, detentions, blackmail, in vivo castrations and other barbaric practices that go on at these nice “disembarkation platforms” where hundreds of migrants, children included, are held. His tale will no doubt sound obscene to Europeans’ delicate ears.

Many Libya Coast Guard officers are in collusion with people smugglers

Two hundred Libyan Coast Guard officers have been trained to “rescue” those who flee to Europe, and to return them to Libya. The EU pays for their training. Another group of 200 will be trained in the coming months. Only the best are selected, say the authorities, but the non-profits insist that besides their brutal treatment of migrants, many of these officers are in collusion with people smugglers. It’s a perfect circle.
What the EU is doing looks a lot like the outsourcing of services that some companies make liberal use of. It is a well-oiled system that enables them to bypass collective bargaining agreements and facilitates staff cuts through simple terminations of business contracts. What’s notable about this case is that the outsourcing leaves it up to a failed state to deal with the dirty work of dissuading Africans from coming to Europe.
Other countries are cooperating to stem the immigration flows to the north in exchange for money – Turkey and Morocco, essentially – but handing the same task to a country that cannot guarantee the bare minimum humanitarian standards is not acceptable; that is, unless it finally turns out that the Libyan model is a good match for this new Europe, whose principles are quickly going down the drain.
English version by Susana Urra.
Italian interior minister declares war on Spanish NGO rescue ship
NBA star Marc Gasol aboard Spanish migrant aid ship: “It’s inhumane. These people should be rescued”
Second migrant ship arrives in Spain after being rejected by Italy, Malta
The battle for the Mediterranean
Publicado por salud equitativa en 5:46