The US embassy warned its citizens to avoid the unrest in the capital Port-au-Prince and reschedule travel plans as several airlines canceled flights. 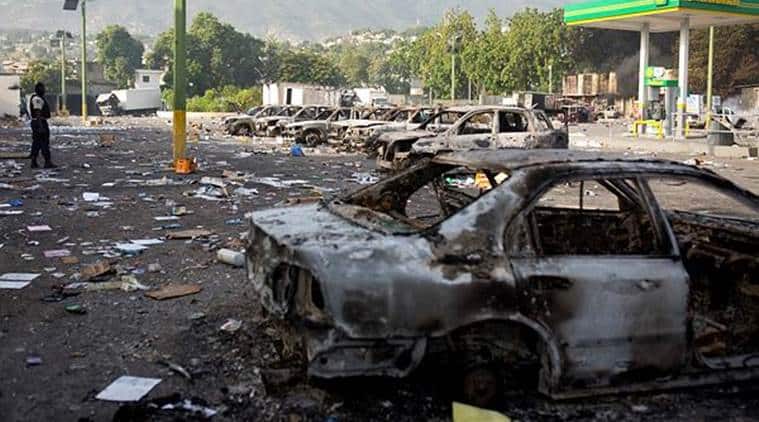 Burned cars sit parked outside the Delimart supermarket complex, near a gas station, after two days of protests against a planned hike in fuel prices in Port-au-Prince, Haiti on Sunday. (AP)
Protesters blocked streets in Haiti on Sunday while many damaged or looted stores stayed closed for a third day following anger over steep fuel price increases in the Caribbean nation.
The mostly young protesters used felled trees and large rocks to block roads, as well as piles of tires set on fire, some of which still smoldered on Sunday, sending up thick clouds of black smoke.
This is a modal window.

'Remember you're one of us,' Uruguay tell Griezmann
Uruguay players urge France's Griezmann to remember his strong ties with the South American nation as the two teams prepare for their quarter-final on Friday.
Police used tear gas to disperse crowds in some places.
The charred remains of cars could be seen in several spots around the sprawling capital, including in front of the Best Western and Oasis hotels, in the capital’s southern hilltop suburb of Petion-Ville, as well as near the offices of telecommunications company Natcom.
The US embassy warned its citizens to avoid the unrest in the capital Port-au-Prince and reschedule travel plans as several airlines canceled flights.
At the Toussaint Louverture international airport, dozens of stranded travelers camped out waiting for flights to resume, lounging on suitcases.
Prime Minister Jack Guy Lafontant announced the temporary suspension of double-digit government hikes to prices for gasoline, diesel and kerosene on Saturday afternoon – just a day after they were announced – but the unrest continued.
Across the capital, few cars and motorcycles were moving on the rubble-strewn streets on Sunday, while broken windows and damaged buildings were a common sight.
At a shopping center in Petion-Ville, police tried to secure shops, with broken glass and merchandise scattered on the floor.
Both the Canadian and Mexican embassies in Haiti announced that they would be closed on Monday.
The decision to raise fuel prices was part of an agreement with the International Monetary Fund, which requires the impoverished country to enact measures to boost government revenue and services and strengthen the country’s economy.
“Due to continuing demonstrations, roadblocks, and violence across Port-au-Prince, as well as short staffing at the airports, embassy personnel have been instructed to re-book any flights originally scheduled for Sunday,” the US embassy said in a statement.
A spokesman for US carrier American Airlines Group Inc said it had canceled three out of seven round trip flights scheduled to stop in Port-au-Prince on Sunday.The carrier’s Sunday route to Haiti’s Cap-Haitien airport had not been canceled.
JetBlue Airways Corp also canceled its flights to Haiti on Sunday.
Haiti’s Commerce and Economic ministries Friday said they would lower fuel subsidies in a bid to generate more tax revenue to better fund government services, which translated to a 38 percent jump for gasoline and 47 percent for diesel.
For all the latest World News, download Indian Express App
Publicado por salud equitativa en 5:27