From the Soccer Field to the Political Arena | Inter Press Service

From the Soccer Field to the Political Arena | Inter Press Service

From the Soccer Field to the Political Arena

Print | Send by email
Oliver Philipp, who studied European and political science in Mainz, Dijon and Oppeln / Poland, has been working for the Department of International Policy Analysis of the Friedrich-Ebert-Stiftung (FES).

A young Russian soccer fan shows his skills outside the Cathedral of St. Theodore Ushakov near the FIFA Fan Fest in Saransk, Russia
BERLIN, Jul 6 2018 (IPS) - Was your childhood room not adorned with posters of Gerd Müller or Zinedine Zidane? Were Willy Brandt or Mikhail Gorbachev the idols you looked up to in your youth?
And is the World Cup the worst time of the year for you, and are you already thinking about what remote place to flee to for four weeks to get away from the football frenzy? There’s no need to. We are about to tell you why the World Cup, now in its final stages, could be interesting to you, too.
Football is football and politics is politics. This statement does not always hold true, as demonstrated recently by the debate about the photograph of German national team members Ilkay Gündogan and Mesut Özil posing with Turkish president Recep Tayyip Erdoğan.
Football just can’t get away from politics. 60 members of the EU Parliament demanded a boycott of the World Cup in Russia in an open letter, and the debate about Putin’s politics will be a constant fixture over the next four weeks. The statements from the German national team were rather predictable. Coach Joachim Löw said that taking part in a World Cup does not equate to ‘associating with a system, regime or ruler’, and no matter where the German national football team plays, it always advocates its values of ‘diversity, openness and tolerance’. 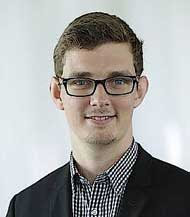 Oliver Philipp
The business manager of the German national team, Oliver Bierhoff, even emphasised that his players were mature and allowed to have an opinion on politics. According to common clichés about footballers, those who are skilled with a ball are not usually skilled with words.
In Germany, you always had to decide at an early age whether you wanted to be famous, enjoy social recognition, have millions in the bank and keep in shape – or go into politics. The examples of Rhenania Würselen 09 defender and former German Chancellor candidate Martin Schulz and striker Gerhard Schröder, former German chancellor, show that football missed out on promising talents because they chose to go into politics.
It looks like it might be a while before the next German top politician with international football experience emerges. Other countries have made some more progress in this regard.
A former World Player of the Year is now head of state in Africa, and in Brazil, the idol of an entire generation has traded in his position on the right wing of the football field for the same position in the political arena. We would like to present four footballers who tried their hand at politics after their active career in football.
A president, an exiled Erdoğan critic and a Brazilian senator
Let’s start with what is perhaps the most prominent example: George Weah. Football fans in Paris and Milan celebrated him for his goals, and FIFA nominated him as the first and, to date, only African World Footballer of the Year in 1995. Weah was celebrated once more in 2017, this time by followers in his home state of Liberia. He won the presidential elections and brought the first peaceful change of government since 1944.
By contrast, the political career of Hakan Şükür could be subsumed under the title ‘From football star to enemy of the state’. Being one of Turkey’s golden generation that unexpectedly won third place at the 2002 World Cup in Japan and South Korea, he is one of the most well-known and popular Turkish footballers. He took advantage of this popularity at the presidential elections in 2014, when he took a seat on the Turkish parliament as a member of the AKP.
However, he declared in 2016 that he was leaving Erdoğan’s AKP and accused the party of taking hostile steps against the Gülen movement. He was subsequently indicted for insulting the president in an alleged tweet about President Erdoğan and investigated for ‘membership in an armed terrorist organisation’. Şükür has been living in the USA since 2015 and was forced to watch from afar as his membership with Galatasaray Istanbul, the club with which he won eight Turkish championships and even the UEFA Cup, was revoked.
Brazilian football star Ronaldinho has received the title as World Player of the Year twice. There was hardly another footballer who’s dribbling skills we enjoyed watching more than those of the ponytailed Brazilian.
It was therefore not only the world of football that was shocked when headlines such as ‘The World Player of the Year and the fascist’ appeared this year. These headlines emerged in light of Ronaldinho’s announcement that he intended to support Jair Bolsonaro, an open racist and candidate to be reckoned with in the presidential elections in October 2018.
But there are other examples from Brazil. Romario, for example, who was also once nominated as World Player of the Year and won the World Cup, is now a member of the Brazilian Congress as senator for Rio de Janeiro, where he is fighting corruption and advocating for the equality of people with disabilities.
It looks like the World Cup has something to offer even to the biggest football grouches and politics nerds. For who knows what future head of state we will be watching on the field. We hope that all the others who want to let politics be politics during the World Cup will forgive us for writing these lines