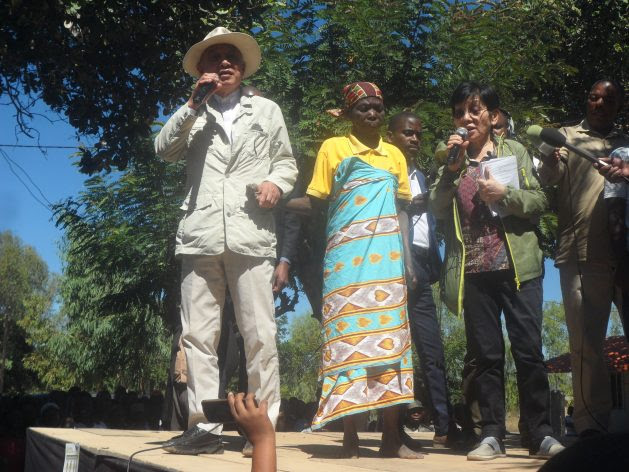 World Health Organization goodwill ambassador for Leprosy Elimination and chair of the Nippon Foundation, Yohei Sasakawa (left), holds the hand of a leprosy patient. Sasakawa visited Mozambique’s rural Namaita Centre to assess the progress of leprosy patients. The Nippon Foundation has been providing funds and medication in order to eliminate leprosy in Mozambique. Credit: Elísio Muchanga/IPS
NAMPULA PROVINCE, Mozambique, Jul 28 2018 (IPS) - It takes Faurito António, 42, from Lalaua district, Nampula Province, two hours to reach his nearest health centre in order to receive the drugs necessary for his treatment of leprosy. António, whose foot has become affected by the muscle weakness that occurs when leprosy goes untreated, says this long walk while ill is the reason why many don’t continue treatment – which can take between six to 12 months.
“There are people who drop out of treatment for alleged fatigue from going long distances to gain access to a hospital,” he tells IPS of the rural distribution of Mozambique’s health centres.
In the deeply rural and poor northern province of Nampula, some six million people, according to the Mozambique ministry of health, are serviced by one health centre in each of the 23 districts.