Eminence is just a tag | The Indian Express

Eminence is just a tag | The Indian Express 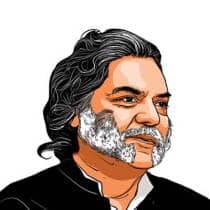 Eminence is just a tag

Centre’s decision to anoint Institutions of Eminence is not the route to academic excellence. For that, we need to provide reasonably-priced or free high-quality education from the primary level. The present policies may anoint institutions of pre-eminence, but unless we make education almost free at all levels and increase job opportunities in research, there is little chance that we will excel in science and technology. (Illustration: CR Sasikumar)
Earlier this month, the Government of India informed us that six higher education institutions have been named Institutions of Eminence (IoE) by the Centre. Of these, five are known for their science and technology schools and one does not exist. They will be permitted to admit 30 per cent foreign students with no restrictions on the fees charged from them. This will also set them free from regulations of the All India Council of Technical Education (AICTE) and the University Grants Commission (UGC). The new status is expected to help them break into the world’s top 500 higher education institutions in a decade and into the top 100 after that. It is not clear how this will actually happen.
At least three of the institutes selected (IITs and the Indian Institute of Science) already enjoy complete academic freedom in what they teach, how they teach and what research they undertake. Most faculty members who want to do research in these institutions are also able to obtain a reasonable amount of research funding without much competition. None of them is able to attract many foreign students at present and it is unlikely that the number will increase if the fees are raised.
Therefore, the actual reason for promoting these policies may not be a desire for academic excellence. The policymakers give themselves away when they suggest that these institutions are expected to “break into the world’s top 500 in a decade”. This obsession with rankings began about a decade ago after the Times Higher Education World University Rankings and the QS World University Rankings started around 2005 and the Academic Ranking of World Universities in 2009. From India, only the Indian Institute of Science was included in the top 500 every year. This would have been okay if the rest were American and European universities. But there was a problem — many Chinese universities had made it, and worst of all, two from South Africa. This was intolerable as the only international ranking we manage sometimes is in the Miss World contests. So, we set up our own university ranking system and, in addition, directed our vice-chancellors and directors to somehow push their institutions into the top 500.
There has been little discussion on the reasons why the Times and QS rankings came up when they did, what they mean and why they include advertisements on their websites. It is quite interesting that these rankings appeared when education was becoming more expensive in the US and UK and more fee-paying international undergraduate students had started going to those countries.
These rankings can typically include surveys on reputation, views of employers, research output, and proportion of foreign students. These rankings are not purely academic but have a reasonable sexiness quotient. This is obviously important for attracting fee-paying undergraduate students. I don’t know of any serious student interested in post-graduate research who selects a place based on overall ranking. Such students are quite clear about which universities they would like to attend based on the reputation of the specific department of interest and the professors’ publications in their area of interest.
As far as academically elite government institutions like IITs, IISc, IIMs etc are concerned, the rankings make little difference to the kind of students they get or the faculty they hire. The students are selected through soul-killing entrance exams, and that will not change until we have a very large number of institutions with similar reputations. The students who make it have little choice as to where they will go. These institutions will get the same kind of students with or without rankings. A few of the IITs have been making it to the top 500 now and then, but that has not changed the quality of applicants for faculty positions in recent years. Out of a large number of applicants, only a few are of good quality and make it while a significant number of positions remain vacant. This is not likely to change with the IoE tag.
As far as scientific and technological careers in research are concerned, private institutions in India do not make much of a difference at present. Only students from middle class and lower-middle class families opt for research careers and the high cost of education debars them from “good” private schools and universities.
Indian institutions will not become centres of “world-class” research by aimlessly striving for rankings or by crores of rupees being poured into a few of them. The problem lies elsewhere. There is almost no country in the world that does well in academic research where education costs money primary school onward. More than 90 per cent of students go to schools that provide free education, including books, in most well-performing countries.
Reasonable education opportunities are priced out for a vast majority of Indians from primary school onwards. A significant number of students in India is saddled with loans by the time they complete a bachelor’s degree in engineering. In such a situation, research careers are not a desired option.
The present policies may anoint institutions of pre-eminence, but unless we make education almost free at all levels and increase job opportunities in research, there is little chance that we will excel in science and technology.
The writer taught at IIT-Delhi and does research on road safety
For all the latest Opinion News, download Indian Express App
More From Dinesh Mohan