Oil prices rose last week on worries that US sanctions against Iran would take away significant volumes of crude oil from world markets while oil demand worldwide increases. 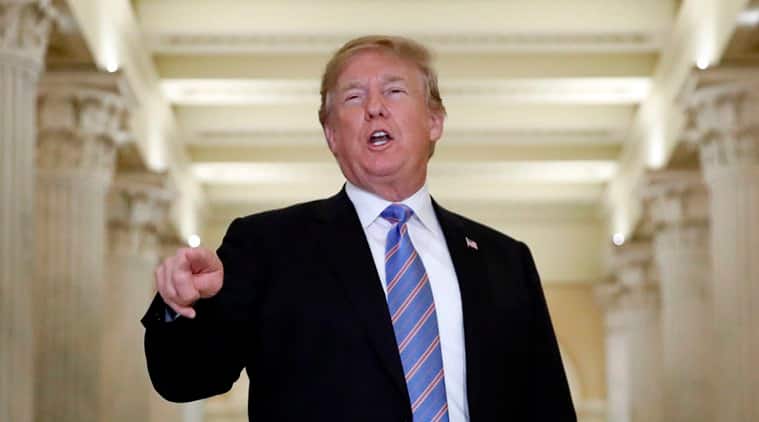 Asked whether someone was manipulating oil markets, Donald Trump said: “100 percent. OPEC is and they better stop it because we’re protecting those countries, many of those countries.” (File Photo)
President Donald Trump lashed out at OPEC with a warning to stop manipulating oil markets and piled pressure on US ally Saudi Arabia to raise supplies to compensate for lower exports from Iran. Trump said in a tweet on Saturday that Saudi Arabia’s King Salman bin Abdulaziz Al Saud had agreed to produce more oil. The White House later walked back the president’s comments, saying the king had said his country could raise oil production if needed.
On Sunday, in an interview with Fox News’ “Sunday Morning Futures with Maria Bartiromo,” Trump reiterated his call on Saudi Arabia to raise production to a new record, arguing that it should help the United States lower fuel prices since Washington is helping Riyadh in its struggle against Tehran. “Don’t forget the one negative to the Iran deal is that you lose a lot of oil, and they got to make up for it. And who is their big enemy? Iran. OK. You think of it. Iran is their big enemy, so they are going to have to do it,” Trump said.
This is a modal window.

Saudis to hit oil record as Iran feels the squeeze
Saudi Arabia plans to pump a record amount of oil in July, according to an industry source, as the Trump administration calls to cut arch rival Iran's exports entirely.
“And I have a very good relationship with the (Saudi) king and with the crown prince of Saudi Arabia and with the others around and they are going to have to put out more oil.” Oil prices rose last week on worries that US sanctions against Iran would take away significant volumes of crude oil from world markets while oil demand worldwide increases. Earlier this year, to the chagrin of European partners, Trump said he would pull the United States out of the Iran nuclear agreement secured by world powers.
On Monday, Brent oil prices were around 1 percent lower but not far from $79 per barrel as analysts have warned of thin global spare capacity to offset potential supply disruptions. Rising gasoline prices could create a political headache for Trump ahead of the November elections by offsetting Republican claims that his tax cuts and rollbacks of federal regulations have helped boost the economy.
On Fox, Trump directed blame at the Organization of the Petroleum Exporting Countries, of which Saudi Arabia is the biggest producer. Asked whether someone was manipulating oil markets, Trump said: “100 percent. OPEC is and they better stop it because we’re protecting those countries, many of those countries.”
“OPEC is manipulating, and you know they allowed (a production increase) less than we thought last week. They have to put out another 2 million barrels in my opinion, because we don’t want that happening,” Trump said. Trump was referring to OPEC’s decision to raise output together with its non-OPEC allies by around 1 million barrels per day, although since then Saudi Arabia has pledged to raise production to a new record.
Saudi Arabia has been pumping around 10 million bpd in recent months and sources close to its oil policy have said it could raise output to 11 million bpd. Trump’s suggestion means he wants Riyadh to increase production to 12 million bpd – something the kingdom has never done in the past.
Trump will visit Europe this month for a meeting with NATO allies, whom he has criticized sharply as paying too little for their joint defense. Trade tensions are likely to overshadow that trip. Trump has imposed tariffs on steel and aluminum in response to what he calls unfair trade practices from Europe, Canada, and other allies around the world, who have responded with retaliatory sanctions in kind.
On trade, the president said in the Fox interview that he was not happy with the North American Free Trade Agreement and would not agree a new one until after the November elections. “I want to wait until after the election,” he said.
For all the latest World News, download Indian Express App
Publicado por salud equitativa en 4:35