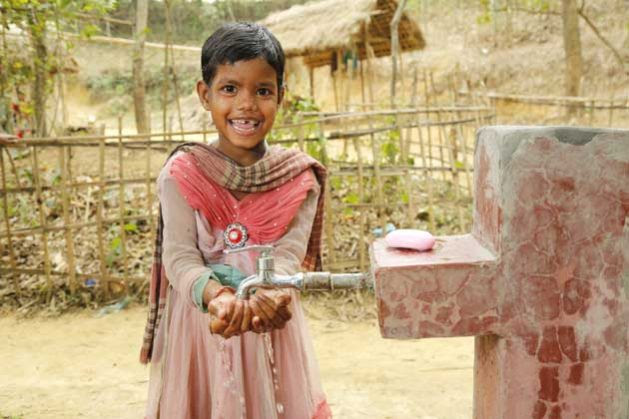 A girl washes her hands and face with soap and water at a water tap, installed with the support of HSBC and WaterAid, in Sylhet District, Bangladesh. Credit: WaterAid/Abir Abdullah
NEW DELHI, Jul 16 2018 (IPS) - In 2030, when I would be turning sixty, I’d like to tell my grandchildren the story of how – once upon a time – the lives of poor people in South Asia were transformed: that leaders came together to bring economic prosperity and social development to people that until then had lived in an unequal and polluted world.
What I am more likely to tell them, is how – even with the knowledge that nearly 800,000 children under five die every year from diarrhoeal diseases caused by poor water and sanitation – governments failed to act and people remain locked in a cycle of ill-health and poverty.
Ending the cycle of poverty absolutely by 2030, without leaving behind a single person, is the most ambitious promise made to date by world leaders in 2015 when they adopted the sustainable development goals: which included the provision of universal access to water and sanitation that is essential for achieving significant progress in health, education and equality.
When people have access to clean water and decent sanitation, their wellbeing increases: women and girls have time to go to school because they don’t have to fetch water for their families – this responsibility often falls on the female members or a family, and with better health comes increased productivity both in school and at work.
For every £1 invested in WASH at least £4 is returned in increased productivity, primarily based on improved health and more time to work or study.
With floods and droughts affecting the region at different times of the year, it is important that climate-resilient services are set up. This includes managing resources responsibly and minimising the effects of climate change.
Governments in South Asia have taken steps in the right direction. Nepal has taken a rights-based approach to water, sanitation and hygiene in its constitution, which sets the bar for accountability at the highest political level. The constitution states peoples’ right to live in healthy and clean environment as well as the right to access to safe water and sanitation.
Through its Clean India Mission, an incredible story emerges from India, where considerable progress has been made on sanitation. The Indian government aims to ensure that the entire population will have access to a decent toilet by 2019, so that nobody has to go in the open after that.
Bangladesh has shown the way on inclusion, having achieved the Open Defecation Free status before 2015. The government of Bangladesh has since adopted an inclusive approach to water as well, and is working to connect all those living in makeshift houses in the capital’s slums to a piped network.
Despite this progress, South Asia faces daunting challenges. Governments, donors and the private sector must be held accountable if they are not doing enough. While 88 percent of South Asia’s population has access to at least basic water, still more than half the population of South Asia lacks access to even basic sanitation.
Disparities are large between cities and rural areas: while 5.6 percent of the urban population in South Asian nations defecate in the open – having no other option as no decent sanitation is available to them – yet in rural areas, this is as high as 45 percent.
For all nations to deliver on their commitment to provide universal access to water and sanitation by 2030, governments need to prioritise WASH – the NGO term for water, sanitation and hygiene – and ensure that finances are directed towards achieving those goals.
Sanitation, water and hygiene have a bearing on health, education, nutrition, equality and poverty eradication. WASH is thus crucial to breaking the cycle of ill-health and poverty in which too many people still live today.
An important part of the promise to deliver water and sanitation to everyone, everywhere, is to leave no one behind. This requires renewed focus on addressing the equity challenge.
The private sector and civil society groups have an important role to play in partnering with the government to reach out to marginalized and vulnerable populations.
This week, world leaders are coming together at the United Nations in New York to discuss the progress made on sustainable development goal 6 – to provide universal access to clean water and decent sanitation.
This is an important moment to highlight the urgency of having clean drinking water and a proper toilet, and to ensure that the lives of people in South Asia and beyond will be transformed within a generation