Chile Has Medicine Against Desertification, But Does Not Take It | Inter Press Service

Chile Has Medicine Against Desertification, But Does Not Take It | Inter Press Service

Chile Has Medicine Against Desertification, But Does Not Take It

Hundreds of children, many from rural schools in the Coquimbo region, have visited the fog catchers in Cerro Grande as part of an educational programme to raise awareness among future generations about the importance of rational use of water in Chile. Credit: Foundation un Alto en el Desierto
OVALLE, Chile, Jul 17 2018 (IPS) - The retention of rainwater which otherwise is lost at sea could be an excellent medicine against the advance of the desert from northern to central Chile, but there is no political will to take the necessary actions, according to experts and representatives of affected communities.
“One of the priority actions, especially in the Coquimbo region, is the retention of rainwater. That is key because since we have eroded and degraded soil and we have occasional rains in winter, the soil is not able to retain more than 10 percent of the water that falls,” Daniel Rojas, the head of the Peña Blanca farmers’ association, told IPS.
“The rest ends up in the sea,” added Rojas, the head of the association of 85 small-scale farmers, located 385 km north of Santiago, which has 6,587 hectares, 98 percent of them rainfed, irrigated exclusively by rainfall.
"If the amount of resources that the state puts into the distribution of water by tanker trucks were to be used to solve the problem, it would be invested only once and not every year, which just boosts a business. Because the distribution of water is a business." -- Daniel Rojas

Rojas considered that “if we had retention works we could use between 50 and 70 percent of that water and restore our groundwater.”
In the region of Coquimbo, where Peña Blanca is located, within the municipality of Ovalle, 90 percent of the land is eroded and degraded.
Between 2000 and 2016, the area planted with fruit trees in Chile grew 50 percent, but in Coquimbo it fell 22.9 percent, from 35,558 to 27,395 hectares.
Water is vital in Chile, an agrifood powerhouse that last year exported 15.751 billion dollars in food and is the world’s leading exporter of various kinds of fruit.
According to Rojas, there is academic, social and even political consensus on a solution that focuses on water retention, “but the necessary resources are not allocated and the necessary laws are not enacted.”
Pedro Castillo, mayor of the municipality of Combarbalá, agreed with Rojas.
“Because of the strong centralism that prevails in our country, desertification won’t be given importance until the desert is knocking on the doors of Santiago,” Castillo, the highest authority in this municipality of small-scale farmers and goat farmers told IPS.
Castillo believes that all the projects “will be only declarations of good intentions if there is no powerful and determined investment by the state of Chile to halt desertification.”
The mayor said that desertification can be combated by investing in water catchment systems, through “works that are not expensive,” such as the construction of infiltration ditches and dams in the gorges.
“With rainwater catchment systems with plastic sheeting, rainwater can be optimised, wells can be recharged and the need for additional water, which is now being delivered to the population with tanker trucks, can be reduced,” he said.
“The cost of these systems does not exceed five million pesos (7,936 dollars) because the works use materials that exist on-site and do not require much engineering. A tanker truck that delivers water costs the state about 40 million pesos (63,492 dollars) each year,” Castillo said. 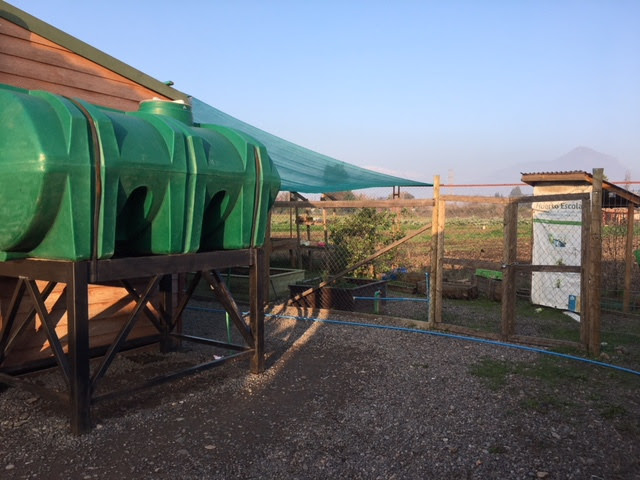 A tank holds rainwater collected at the Elías Sánchez school in the municipality of Champa, 40 km south of Santiago, which the students decided to use to irrigate a nursery where they grow vegetables next to it. Saving rainwater helps restore the groundwater used to supply the local population. Credit: Orlando Milesi/IPS
He also proposed curbing desertification through afforestation with native species of lands handed by agricultural communities to the government’s National Forestry Corporation (CONAF).
“Afforestation efforts involve the replanting of native trees tolerant of the scarce rainfall in semi-arid areas, and they generate fodder for local farmers,” he said.
The region of Coquimbo comprises the southern border of the Atacama Desert, the driest desert on earth which has the most intense solar radiation on the planet. Covering 105,000 sq km, it encompasses six northern regions in this long and narrow country that stretches between the Andes Mountains and the Pacific Ocean.
This year Peña Blanca, at the southern tip of the desert, received 150 mm of rainfall, a high figure compared to the average of the last few years.
Rojas said “there are many things to be done, not to halt the advance of desertification completely, but to slow it down.”

The social leader said that in meetings with both academics and politicians there is agreement on what to do, “but that is not reflected when it comes to creating a law or allocating resources to do these works.”
To illustrate, he mentioned a novel project for the retention of rainwater underground, saying the studies and development of the initiative were financed, “but not the works itself.”
“And this way, it’s no use. Ideas must be put into practice through works. This is what is urgently needed: fewer studies and more works,” he said.
Rojas also criticised the fact that the state spends “billions of pesos” on the distribution of water to rural areas through tanker trucks.
“If the amount of resources that the state puts into the distribution of water by tanker trucks were to be used to solve the problem, it would be invested only once and not every year, which just boosts a business. Because the distribution of water is a business,” Rojas said.
Geographer Nicolás Schneider, the driving force behind the non-governmental “Un Alto en el Desierto” (A Stop in the Desert) Foundation, told IPS that in Chile “there is no public policy in terms of tools, concrete policies and the provision of resources” to halt desertification in the country.
“Successful alternatives are isolated experiences that are the product of enthusiasm or group ventures, but not of a state policy to stop this scientifically accredited advance (of the desertification process),” he said.
He mentioned Chilean physicist Carlos Espinosa, who invented the fog catcher, a system whose patent he donated in the 1980s to the United Nations Educational, Scientific and Cultural Organisation (UNESCO) and which consists of harvesting water from the fog.
Fog catchers consist of fine mesh nets known as raschel set up on foggy slopes to catch suspended drops of water, which gather and merge, running from small gutters to collection tanks.
These systems, which are becoming more and more sophisticated, have been providing water for human consumption and for irrigation on land generally higher than 600 metres above sea level for decades.
In the Cerro Grande Ecological Reserve, owned by Peña Blanca, the Un Alto en el Desierto Foundation installed 24 fog catchers and a fog study centre.
“The average daily water from fog there is six litres per cubic metre of raschel mesh and 35 percent shade. Since they are nine square metres in size, we have a catchment area of 216 metres, which gives us 1,296 litres of water per day,” Schneider said.
He explained that “this water is mainly used for reforestation and ecological restoration, beer making, water for animals and – when there is severe drought – for human consumption.”
“It is also an educational element because thousands of children have visited the fog catchers, so they have been turned into an open-air classroom against desertification,” he said.
He added that there is great potential for fog from Papudo, on the central Chilean coast, to Arica, in the far north of the country, which has not been exploited to the benefit of coastal communities that have problems of access and water quality.
Eduardo Rodríguez, regional director of Conaf in Coquimbo, told IPS that all of the corporation’s programmes are aimed at combating desertification, including one against forest fires, which now have better indicators.
“However, we have problems with afforestation because we do not yet have a policy for providing incentives to increase afforestation, reforestation and replanting in a region that has been degraded for practically a century and a half,” he acknowledged