The government has seized upon a Beijing plan to integrate the former British colony into the Pearl River Delta to create the Greater Bay Area, a region comprising nine cities in China's Guangdong province, plus Hong Kong and Macau. 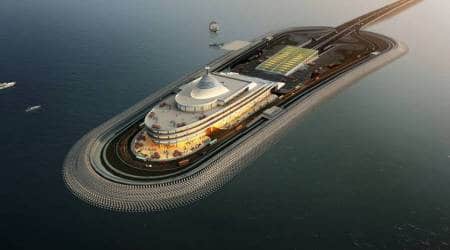 Some Hong Kong officials and lawmakers are encouraging younger residents to consider living across the mainland China border so that they can escape the territory’s sky-high apartment prices and find more job opportunities. It is not an easy sell but some pro-China business leaders say resistance to the idea will eventually crumble.
The government has seized upon a Beijing plan to integrate the former British colony into the Pearl River Delta to create the Greater Bay Area, a region comprising nine cities in China’s Guangdong province, plus Hong Kong and Macau, that would have the equivalent of the fifth-largest economy in the world by 2030 and a population of nearly 70 million. Hong Kong’s population is currently about 7.4 million.
This is a modal window.

Hong Kong's 'haunted apartment' prices levitate with white-hot market
Hong Kong’s record-breaking property price surge over the past few years is pushing many to reconsider so-called "haunted" apartments, whatever the bad history.
Moving to one of those other cities would mean that Hong Kong’s millennial generation, many of whom have been priced out of Hong Kong’s housing market, could afford to buy their own homes or rent more than a shoe box. They would also have a wider range of jobs to choose from.
They may, though, miss the freedoms of Hong Kong that are guaranteed under a “one country, two systems” system for the 50 years after the British handover of the territory to China in 1997. In Hong Kong, for example, the media and the Internet are relatively freewheeling, while in China they are censored vigorously.
A further diffusion of people who are Hong Kong born and bred into the mainland may dim support for the pro-democracy movement in the territory, especially if more rich Mainlanders move into Hong Kong to replace them.
But Beijing has made it clear that economic integration is key to reinforcing its sovereignty over Hong Kong – and it gets support from within the business community. “We will no longer be Hong Kong people, but Greater Bay Area people,” Jonathan Choi, Chairman of the Chinese General Chamber of Commerce of Hong Kong, told the Hong Kong Economic Times last month. “We should, therefore, focus on integration rather than on the interests of Hong Kong,” said Choi, who is also a member of the Chinese People’s Political Consultative Conference, the top advisory body to China’s parliament.

A series of major infrastructure projects due to be finished in the next three months are going to connect major cities in the region through fast trains and road bridges, reducing the time to commute to and from Hong Kong significantly. “That distance, I believe, will no longer be a problem once they have learned about the latest progress of our growing transport infrastructure links with the Bay Area,” Hong Kong Chief Secretary Matthew Cheung said in a blog in June titled, “Debunk the myths over Guangdong-Hong Kong-Macao Bay Area”.
The migration has already been happening. At least 500,000 Hong Kong people resided in the mainland last year, up from 155,000 in 2009 and just 62,000 in 2003, according to official data.
It is a stunning transformation from the days only 40 years ago when the Pearl River Delta was more of a sleepy, poor agricultural region that was not much more than a curiosity to people in Hong Kong. It is now one of the world’s industrial engines, whose cities have among the highest per capita incomes in China.
Property agents in southern China said they had seen a jump so far this year in the number of Hong Kong people looking to buy homes across the border, especially in cities such as Zhuhai and Zhongshan, although most were sophisticated investors rather than the youth the government is targeting. One said the increase had been as much as 40 percent.
Jackie Chan, a Hong Kong investor unrelated to the movie star of the same name, bought a home in the southern Chinese city of Zhongshan in April, betting that Beijing’s backing of the Bay Area plan was sure to bolster prices. “I bought for the Greater Bay Area concept because it’s a national initiative and it will support the development of many new industries,” said Chan, who already owns four apartments in Hong Kong, among the world’s most expensive real estate markets.
In Zhongshan, homes can be snapped up for 1,400 yuan ($209.47) per square foot, while those in Zhuhai go for around 4,000 yuan per square foot – a steep discount to the roughly HK$15,000 ($1,923) per square foot for an apartment in Hong Kong.
Still, the bulk of Bay Area purchases so far have been for investment purposes or holiday homes, rather than as primary residences.
Another barrier is China’s “Great Firewall”, which ensures many foreign websites are blocked on the mainland in the name of maintaining social stability, but that is not the case in Hong Kong.

While supporters of Hong Kong independence remain a small minority in the city and the pro-democracy camp faces a crisis of confidence over its future, younger residents overwhelmingly identify themselves as Hong Kong people, rather than mainland Chinese.
Hong Kong Youth Power Association, a pro-establishment organization, published a survey in May that showed almost 60 percent of the 878 young people polled said they would not consider working or living in the Bay Area.
Reasons included not wanting to be far from home, higher income taxes on the mainland and being unfamiliar with Chinese government policies.
Hardline activists say that young people will just never buy into the idea of living across the border. “Many young people don’t reject the idea of visiting the mainland for fun. But if you want them to live there, you have your head in the clouds,” said prominent activist Nathan Law, 24, who was elected as Hong Kong’s youngest legislator in history before he was ousted by the government. “You can’t even use WhatsApp or watch YouTube videos. You are isolated from the world.”
($1 = 6.6833 Chinese yuan renminbi)
For all the latest World News, download Indian Express App
Publicado por salud equitativa en 5:53