The shadows over Trump’s startling rise 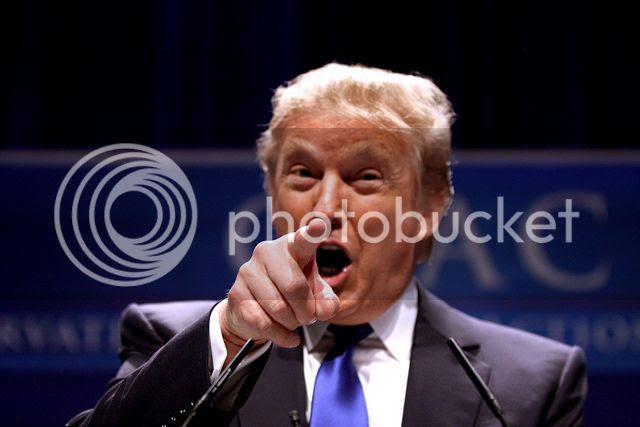 Photo: Gage Skidmore / Flickr
Hello. My name is Sarah. I am a recovering Republican, but maybe not for long (not sure where I belong). You see, my political party, the one that ended slavery, gave women the right to vote, and ended the Cold War, has now elected a narcissist populist to be its leader and nominee for president. Quite out of left-field actually and literally.

But don’t blame me – It’s not my fault. I did NOT vote for him nor will I (and nor will I vote for Hillary either. Gary Johnson is looking more attractive these days.). Trump took me by surprise as well. Let me explain…

Since the election of the US’s most left-wing president, Barack Obama, in 2008, Republicans have been trying to funnel their frustration, anger, money, and rhetoric into an organised movement to put the next Ronald Reagan back in the White House. With the unexpected rise of the “Tea Party” movement, the GOP started to see electoral gains in the mid-terms of 2010.

These gains fostered great legislative wins at the state and local levels over the next several election cycles, despite the disastrous 2012 Romney presidential campaign. In fact, “Republicans now control about 56 per cent of the country’s 7,383 state legislative seats, up 12 percentage points since 2009. During Obama’s presidency, [Democrats] lost 11 governorships, 13 U.S. Senate seats, 69 House seats, and 913 state legislative seats and 30 state legislative chambers.” Many of these wins were also happening in years of congressional redistricting, meaning the legislatures were re-drawing congressional districts thus cementing Republican staying power.

During the wilderness of the Obama years, all of these quiet victories were consoling to limited-government conservatives like me.

We conservatives kept telling ourselves – We just need to get to 2016. When 2016 comes, our time will come and victory will be ours! We’ll remind the world of the power of supply-side economics to lift all boats in the economy; how innovative and charitable individuals can be freed from the shackles of oppressive government and bureaucratic naysayers; we’ll take back our place as leader of the free world; and show that an efficient government is a federalised one with strong state and local authority. Our courts will be filled, not with activist judges who like to legislate from the bench, but with judges who actually interpret the law as the Constitution intended. There is a light at the end of the tunnel – Don’t lose hope! We will take our country back in 2016, so we told ourselves.

This can’t be our reality? Surely, it is not 2016 yet? I will wake up, and it will all be a bad dream. Has the GOP really just spoiled what was to be its great triumphant moment? The resurrection of the American Dream?

As a conservative who has worked in the conservative movement her entire adult life so as to preserve this amazing democratic experiment for generations to come, I am just as surprised and horrified as you, British reader.

How did a New York City, left-wing elite, donor to Hillary Clinton, and someone who had never voted in a Republican primary, become the GOP nominee?

Now, you are looking to me, who has been part of the machine, to explain how this has come to pass because you do not want your prime minister to stand on the same stage as Donald J Trump. Well, I highly recommend you read Megan McArdle’s piecefor Bloomberg, which thoroughly explains the political manoeuvring behind how we have arrived here.

However, I will do my very best in the limited space I have here, to explain how I think we as a nation have gotten what Plato would say a late-stage democracy ripe for tyranny. Warning, it is not going to make me popular.

There is no better place to start than to quote two of my favourite thinkers:


“Liberty does not exist in the absence of morality.”  — Edmund Burke
“As the family goes, so goes the nation, and so goes the whole world in which we live.”  - John Paul II
The United States is no longer the place that the French political thinker and historian Alexis de Tocqueville wrote about in his in-depth observations of a young United States in 1835, Democracy in America.

America is great because America is good, and if America ever ceases to be good, America will cease to be great…The safeguard of morality is religion, and morality is the best security of law as well as the surest pledge of freedom…They brought with them...a form of Christianity, which I cannot better describe, than by styling it a democratic and republican religion... From the earliest settlement of the emigrants, politics and religion contracted an alliance which has never been dissolved.

Which has never been dissolved until now. The Judeo-Christian family, which created the soil and the civil society by which American independence, liberty and prosperity grew and flourished for millions, has been on a downward spiral for decades.  I believe it does stem from America’s loss of its religious observance and loss of Judeo-Christian ethos.

Americans are less religious now and with that has come the breakdown in family stability. Some of the consequences are that they marry later, they divorce more frequently, are incarcerated at ever increasing rates, take antidepressants in alarming numbers, are addicted to pornography, have more children out of wedlock, and have adopted laws that allow women to terminate unborn children.

It is the destruction of the family unit that is the greatest social loss from America losing its religion. The vacuum created without the familial values of love, support, respect, and moral clarity has led to a huge uptick in psychological dysfunction and unhappiness in the U.S. People are just miserable with their own lives and poor life choices, and quite honestly don’t even realise it in most cases.

Their moral compass is shot. It’s “whatever you feel” or “whatever works for you.” Americans have no idea what is right and wrong anymore. I mean we are discussing whether or not men can use women’s bathrooms! Eighteen year-olds today need to find a “safe place” while their grandparents were storming the beaches of Normandy at eighteen. Roughly 50 per cent of Americans are also on some form of government assistance, and I would argue because the family is not there to support people like it used to be. Across the board, adults and children are screwed up, ask any school teacher. My mother, a special education administrator, says she feels more like a social worker than an educator.

Americans model themselves on music artists who sing/rap about rape, robbery, adultery and murder with mind-numbing language as if it’s perfectly normal. They are addicted to video games where they are literally raping, murdering, and stealing for fun. They watch and venerate people who bare their dysfunctional lives and naked bodies on TV to make money and become celebrities, aspiring themselves to be discovered in the same way on their own social media accounts. They watch steroid-infused wrestlers and American football athletes, with unbridled loyalty and religious fervour, tearing each other apart like animals, which also happens usually to be on the Sabbath.

America prioritises all of these base, reactive pleasures above any form of morality, decorum or thinking. How about trying to instil the virtues of prudence, temperance, fortitude, and justice or to contemplate what the real meaning of marriage is, which by the way is not just to make you “happy”? How about just trying to be still, quiet or meditative? Or how about having a meal with your family without a screen or a phone at the table?

I argue all of these trends follow the destabilisation of the family and America becoming less religiously observant.

And, you can’t blame the rise of Donald Trump on faithful churchgoers. The numbers actually show that less observant Christians are the ones supporting Trump.

Couple this crass culture with a stagnant economy, America losing standing in the world, huge personal college loan and credit card debt, a government which isn’t reflecting the concerns of Main Street, and you have the formula for a peasants revolt with torches and pitch forks.

It doesn’t matter where he has stood on the issues in the past, been friends with Hillary & Bill or what he says about women, Muslims, Hispanics, his opponents, and the disabled – just to name a few. Americans can overlook these statements as entertainment, because let’s face it, Americans hear and watch much worse. They’re immune, and really it’s quite normal banter for them. How lovely.

Trump is going to Make America Great Again. He makes deals. He’s the BEST DEAL MAKER in the world. He is going to Burn It Down. He’ll show ’em.

Enter in authoritarianism in America.


Sarah Smith is the Managing director of a transatlantic business association and a former US free-market campaigner and fund-raiser.This article first appeared in The Conservative Woman and is republished here with permission
- See more at: http://www.mercatornet.com/articles/view/The-shadows-over-Trumps-startling-rise/18033#sthash.a6XJgqMh.dpuf

Following political news can be a depressing occupation. Our lead story today is a rather negative look at the presumptive Republican nominee, Donald Trump. But for all his boorishness, The Donald has been trumped by the election of Rodrigo Duterte as president of the Philippines, who has promised to end crime, mostly by killing the criminals. His remarks about women eclipse any of Mr Trump's more colourful remarks.
In search of some light relief, I discovered the author of a new art form, Ken M, who has been hailed as "the most epic troll on the internet". He has become an internet celebrity, profiled in Gawker, Gizmodo and other geeky online magazines. His subtle but hilarious ploy is to play dumb and allow other commenters to criticise him. But he always seems to have the last laugh. “What I do is turn a toxic space into a source of belly laughter, so it’s not gross anymore,” he once explained.
It's an intriguing approach to humanising the internet. Sometimes it pays not to be too serious. See the article and video below.