Their lives depend on the West knowing their names, their plight.

Asia Bibi
Their lives depend on the West knowing their names, their plight.
As unimaginable as it is that a Christian mother of five has spent seven years in prison in Pakistan, charged with blasphemy for taking water from a well in a hot field while berry picking and considered an infidel, corrupting it…she remains imprisoned and in isolation, for her safety from threat of death inside the prison and certainly outside it, if she were to be released in the increasingly hostile environment there.
How bad is it? This bad. The American Center for Law and Justice, which drove a social media campaign along with the inside legal proceedings, to free Pastor Nadarkhani. ACLJ is now working on freeing Asia Bibi in a nearly impossibly complex Pakistani legal, cultural and religious-based penal system.
International human rights organizations have taken up her cause as a just one, and an emblematic case that puts a human face and name and humanity and dignity on the ‘issue’ of Christian persecution in the Middle East and elsewhere. The UN conference I recently attended on international religious freedom, genocide, and atrocities committed against Christians and other religious minorities, continued for two more days at a different venue where Asia Bibi’s daughter (who speaks no English) gave a very powerful testimony in her silent witness of tears and her very presence.
What can we do? Pray for Asia Bibi, her family, and the countless other victims of persecution and death for their faith. Support Aid the the Church in Need, which is supporting individuals, families and groups in dire need. They’re on the ground there, able to direct relief where it’s most desperately needed. Call on elected representatives who either ignore theses cases, or relegate them to lower priority status while they negotiate with nations that are or could be involved in the fate of these people.
Add the cause of Fr. Tom Uzhunnalil to those prayers and efforts. Despite rumors to the contrary, he is reportedly alive, well, and possibly soon to be released.
Father Tom was seized March 4 after a militant group stormed a home for the sick and elderly run by Bl. Mother Teresa’s Missionaries of Charity in Aden in the country’s south west. Four sisters of the religious congregation and 12 lay people were killed in the attack on the facility.
During Holy Week, unconfirmed stories began circulating in India claiming that the kidnappers planned to crucify the priest on Good Friday. Pope Francis appealed for Father Uzhunnalil’s release last month.
In its most recent statement, issued May 5, the Salesians said the situation was “still uncertain” but added there were “deep and heartfelt prayers” for Father Tom in the hope he could soon “continue the valuable service” he was carrying out at the Yemeni mission. 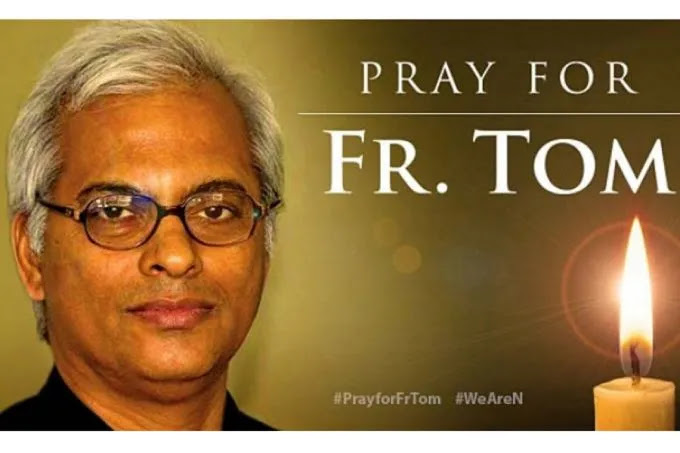 As we go about our daily work, business, leisure activities and distractions, these and countless other prisoners and hostages and victims of persecution are going through martyrdom simply for their faith. Twitter campaigns and other social media activism have kept some of them alive, by keeping their names and stories before people in power who can do something for them and populations of people whose names we don’t know and faces we don’t see, whose stories are lost in the inhumanity of grabbing them from their homes, destroying their papers, seizing their properties, and sentencing them to anonymous torture and brutality. ‘The world must act’ said more than one of the UN conference participants. Being aware and committed is, at minimum, the beginning of an end to these crimes against humanity.
If #WeAreN2016 and #FreeAsiaBibi can do anything like the Twitter campaign for Pastor Nadarkhani, there’s more hope than those suffering now can imagine
- See more at: http://www.mercatornet.com/sheila_liaugminas/view/help-asia-bibi-and-fr.-tom/18099#sthash.3jXuplDQ.dpuf

Mother Teresa of Calcutta is to be canonised in Rome on September 4. Although her name is a byword for generous service to humanity, the Albanian-born nun has attracted some criticism. Gëzim Alpion, also Albanian, a sociologist at the University of Birmingham, has become an expert on her life, writings and reputation. His bookMother Teresa: Saint or Celebrity? was published in 2007 and another book is on the way. Michael Cook asked him why he is so interested in Mother Teresa, and his answers are intriguing.
Alpion does not follow any religion but describes himself as a “spiritual-rationalist”. He says he is interested in Mother Teresa not because she was particualrly enlightened, rather, because "she was in the dark all her life" -- a reference to her experience of spiritual desolation. He concludes:
Mother Teresa’s hagiographers and friendly biographers should not be afraid that she could become less appealing if we know more about her. On the contrary, the more we uncover about her as an individual, the more her personality and legacy as a missionary would appeal to Catholics, followers of other faith, as well as those who profess no religion.
That must surely be the case.