MercatorNet: Ahead in the cloud: East African digital pioneers

MercatorNet: Ahead in the cloud: East African digital pioneers

Ahead in the cloud: East African digital pioneers 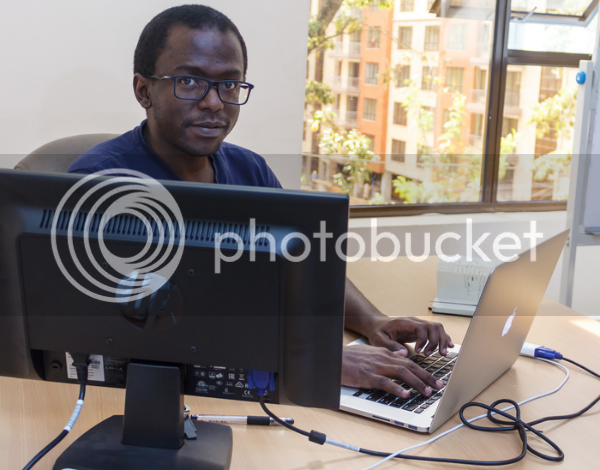 Phares Kariuki of Node Africa
It’s 8.30 AM on a typical Nairobi Wednesday. I am at the offices of Node Africa, a cloud services company. It’s a young firm, less than two months old. I have come to meet the CEO, Phares Kariuki, who’s in his early thirties. The office is medium-sized, divided into a large workspace with computer screens on a large red divided table; a lobby with a roll-up banner, coffee bar and no furniture; and a small boardroom with four chairs.
I am thirty minutes early, and Phares is meeting someone else in the boardroom. In the few minutes I wait for him, I look around and take in the surroundings. Outside the window, machines clang and whirr at a construction site across the road. As I come to learn later, the usual occupants of the deserted workspace are working from a data centre this morning.
This is Silicon Savannah par excellence: a small office on the second floor of a new building, close to a reputable mall with nice coffee shops, run by brilliant young people and within the radius of the iHub, Nairobi’s bespoke tech hub.
The Silicon Savannah is a testament to the opportunity Africa has, and has used to good measure, to leap over clunky legacy technology right into the digital age. And lead in it. The story of how mobile banking took off in Kenya and connected millions of unbanked people to the financial system is still a case study in many business schools around the world, although for Kenyans it is an everyday convenience.
Another case study is likely in the making, and Phares is right at the head of the charge, together with his long-time friend Brian Muita, with whom he started Node Africa. If their vision comes to pass, many African companies will find it relatively simple to move online. They will have the power of the cloud on hand to connect to the digital world, skipping entirely the high costs and clunky maintenance of the old systems many Western companies have have started out with.
The mission of Phares and Brian is to make Africa a “cloud-first” continent. They have already proved that it can be done. Back in 2012, the duo started Angani, the first cloud services company in East Africa. Angani is a Kiswahili word meaning “in the sky”i. The adverse circumstances under which Brian and Phares cobbled together the company – and the ingenuity with which they were surmounted – won them the admiration of many in the local tech scene, and eventually the patronage of many local companies which needed (or realised they needed) their services.
Unfortunately, in October last year, they were unceremoniously booted out of the company under controversial circumstances. One of the more devastating results was the collapse company’s platform, which Brian had spent two years building. Although the platform was later restored - albeit not to its original level - Angani fell out of favour with the local tech community, and has almost faded to oblivion.
But it was not a total waste. If nothing else, it proved that Africa could move to the cloud using homegrown solutions. It also taught the founders invaluable lessons on navigating the still-nascent space. In February, they launched Node Africa, which basically follows in the footsteps of Angani. The company already has a sizeable number of clients, from bakeries to security companies, and has been featured as a success story by VMware, the world’s largest supplier of virtualisation software.
From their second-floor office, Phares and Brian are presiding over a revolution in the way African companies do business. What has been an incremental and expensive upgrade for most Western companies is going to be, for their African counterparts, an introduction to digital tools. The road ahead is fraught with challenges. But it will be a most rewarding sport to see how they are overcome.
Mathew Otieno writes from Nairobi, Kenya.
- See more at: http://www.mercatornet.com/harambee/view/ahead-in-the-cloud-east-african-digital-pioneers/18095#sthash.B3YyVfl6.dpuf

In our lead story today, Margaret Somervillle discusses the ethics of head transplants. Or whole body transplants, which sounds a bit more acceptable. This is, no kidding, a serious proposal by an Italian transplant surgeon. One person has already volunteered to be the head. All that is needed is a body and a country where an ethics committee will give its blessing to the project.


This brought back fond memories of late-night creature features. In the 50s and 60s they really knew how to make B-grade horror films. Lots of blood and gore, a few mad scientists, a barely plausible pretext for a plot, and a flickering black &amp; white TV. Nothing can be more satisfying than that.
Given the Italian surgeon's proposal, The Brain that Wouldn't Die now looks prophetic. Does anyone remember The Fly, about a scientist who also loses his head, albeit in a more creative way? Or, my favourite, The Blob, Steve McQueen's first feature? If this is prophetic, we're in trouble. From a meteorite oozes a gooey slime which dissolves and absorbs everything living it touches, eventually absorbing most inhabitants in a small American town. Steve &amp; Co dispose of it by dumping it in the Arctic. We're safe, says Steve, "as long as the Arctic stays cold." With global warming, who knows how long that will be?