The Pope’s secret war against Hitler.
- See more at: http://www.mercatornet.com/articles/view/church-of-spies/17556#sthash.VpIbSnAc.dpuf 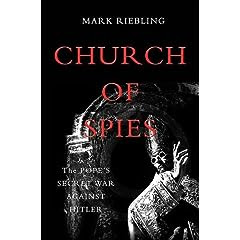 
At the beginning of this book, with its startling title and dramatic, if slightly sinister picture of Pope Pius XII, its author, Mark Riebling, includes an arresting epigraph; a quotation by a German Jesuit, Fr Alfred Delp: “How do we represent our religion? Just as a system, or as a glowing fire?”
It is a good question, then as now. What Delp, hanged by the Nazis for his support for the German resistance, meant was this: Is the Catholic Church simply an institution, with all the strengths and weaknesses of any institution; or is it a spiritual body, indeed “the Mystical Body of Christ” as an old formula describes it?
The answer is obviously “both”. The weakness of Riebling’s engrossing book is that he is enthralled by the institution and, in particular, by the office and personality of Pius XII, so that he has a pronounced tendency to misinterpret the sacred aspect of the Church as it exists within the world. The book’s blurb describes him as a “pathbreaking writer on secret intelligence” and in his mind the Vatican’s wartime diplomacy is the stuff of a spy thriller in the genre of a John le Carre novel.
Thus papal diplomats are called “papal agents”; as Pope, Pius “saw politics as religion by other means”; he was sent to “run papal operations in Germany”; he engaged in “peace intrigues” and agreed to “serve as secret foreign agent for the [German] resistance”. This makes for a certain tension in the narrative: Riebling wants to state that “history can document [Pius’] choice to help kill Adolf Hitler”, while caution and respect for the facts makes him also accept - quoting the words of Josef Muller, a Munich-based lawyer employed as the liaison link between the German resistance and the Vatican - that “The Pope would not directly endorse violence.”
Indeed, Muller, a key figure in the book, a devout Catholic who was prepared to risk his life many times in the service of those trying to rid Germany of the “tyrant” in charge during the Third Reich, was clear that “We could not portray the Pope as a direct accessory to an assassination.”
Pius XII’s position was clear. As a world-famous spiritual leader he yearned for peace and an end to the War; knowing the crimes committed against the Jews and others by the Nazis (as they were reported to him by his nuncios around Europe), he felt certain that Germany was in the hands of “diabolical powers”; as the head of Vatican City, a neutral state following the Lateran Treaty of 1929, he was keen to broker peace, if he could, between the warring elements in Europe; and he knew that brave Germans, including Jesuit priests such as Rupert Mayer and Alfred Delp, were part of secret, un-coordinated (and finally doomed) efforts to overthrow Hitler.
But he did not bless the would-be assassins or know their actual plans. As a man who had worked as a papal diplomat for most of his priestly life, he understood acutely the thin line dividing diplomacy, a legitimate enterprise, from secret political plotting, an illegitimate activity for a person in his role, and he stayed firmly on the right side of the line. Riebling implicitly acknowledges this in his interview with Fr Peter Gumpel SJ, postulator for Pius’ cause for sainthood. Gumpel is quoted as saying, “One has to be very careful when speaking about direct involvement or direct influence because it is not the place of the Vatican to meddle so much in the affairs of foreign states...Their way is very discreet...They act more prudently.”
Having thus qualified what Riebling means by the ambiguous phrase of his sub-title, “The Pope’s secret war against Hitler”, I can now endorse it as a first-class spy thriller, dealing not with fiction but with historical facts. At the very least, his book demolishes the infamous slur that Pius XII was “Hitler’s Pope”. As well as this, it shows the huge obstacles faced by the German resistance as it agonised over how to get rid of Hitler. Protestant members of the Abwehr, the German intelligence division which harboured many covert anti-Nazis, including Dietrich von Bonhoeffer, and which lay behind the army officers’ July Plot of 1944, had initial scruples about assassinating an unarmed man and contravening their military oath of allegiance.
Catholics, such as Josef Muller, had no such qualms. They had studied St Thomas Aquinas and Catholic teaching on tyrannicide – the death must improve conditions, the tyrant must be the primary instigator of evil policies and all peaceful means must have been explored – and their consciences were clear. But the stakes were very high; Muller himself, who liaised between the Pope’s unofficial aide, Fr Robert Lieber SJ, and the Abwehr, was actually standing on the gallows at Flossenburg in April 1945 during the final weeks of the war, waiting to be hanged alongside other members of the July Plot, when a sympathetic Nazi friend he had cultivated and who happened to be the head of Hitler’s bodyguard, did him a random and unexpected favour.
Even though one reads this book with retrospective knowledge of the outcome, aware that Hitler, who survived several assassination attempts, had “the luck of the devil” and was able to choose the timing and manner of his death, such is Riebling’s skill as a story-teller that he keeps up the suspense until the end. He has done his homework, including 100 pages of meticulous citations and references as well as a full bibliography. His book does not undermine the reputation of this controversial Pope; it enhances it.
Francis Phillips writes from Buckinghamshire in the UK
- See more at: http://www.mercatornet.com/articles/view/church-of-spies/17556#sthash.VpIbSnAc.dpuf

In spite of all attempts to make the charge “Hitler’s Pope” stick, the last word has definitely not been said about Pope Pius XII and the Nazi leader. The latest account of his role in World War II and the fate of the Jews comes from Mark Riebling, an acclaimed writer on secret intelligence.
From all accounts – including today’s review by Francis Phillips – Church of Spies is a first-class spy thriller. On the book’s Amazon page we learn that Riebling’s interest was piqued by a couple of retired spies who insisted that the Vatican had the best intelligence system around. But he adds:
Less abstractly, I just thought that much of what had been written about the wartime Church was wrong!