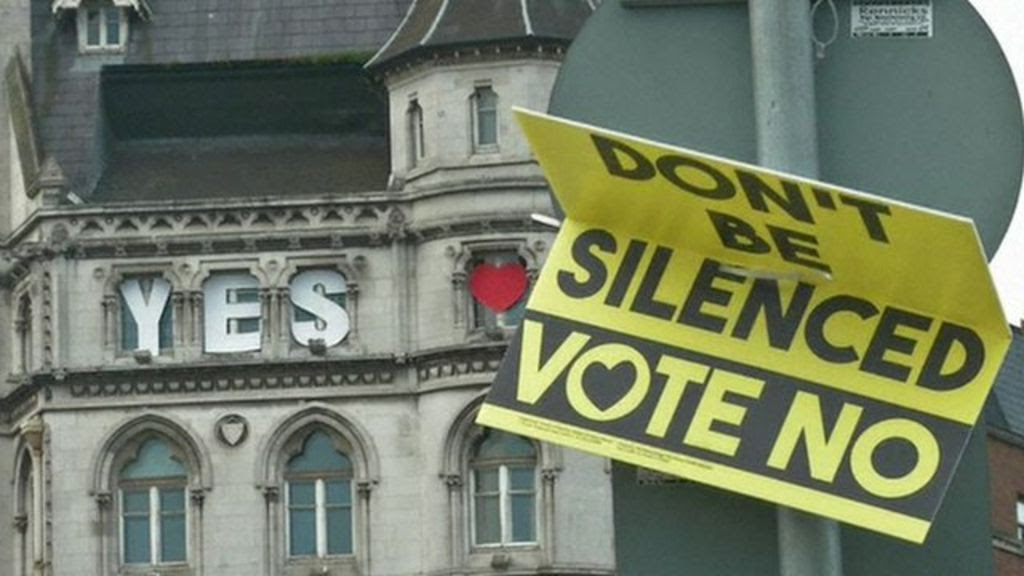 I hope Australians will be brave enough to resist the enormous pressure that is already been brought to bear on them to radically change the definition of marriage and the family in a way that will be especially harmful to the interests of children.

On May 22 last year, Ireland became the first country in the world to vote in favour of same-sex marriage by popular plebiscite. The margin was 62 percent to 38 percent in favour. That was a handsome victory for the same-sex marriage side. I would love to say the vote surprised me, but it didn’t.

For months, no, for several years before the vote, opinion polls were showing that upwards of 70 percent of Irish people favoured altering our Constitution so as to allow same-sex marriage. On average only 18 percent of people were opposed. Or so the polls suggested.

For one thing, people were terrified to publicly admit that they were opposed to same-sex marriage, or even had doubts.

During the four-week referendum campaign, tens of thousands of Yes voters up and down the country were to be seen sporting “Yes Equality” badges.

During the campaign, journalists went to various parts of the country to do “vox-pops” that is, to interview people on the street for their opinions. They were able to find No voters, but almost none of them would go on the record, let alone appear on camera out of fear.

Is that any way to run a democracy? Our politicians did absolutely nothing to encourage open debate. Every single party was in favour of same-sex marriage. Fairness is the last thing they were interested in.

The Children’s Minister, James Reilly, went so far as to warn voters that vulnerable gay people might harm themselves if the vote went the “wrong” way.

In my book, the very bravest people on the No side were not those of us who appeared on radio and television. It was our canvassers. They commonly had to run a gauntlet of abuse.

Genteel pensioners had leaflets urging a No vote ripped out of their hands, torn up and then thrown back in their faces by university students.

Other canvassers had eggs pelted at them by Yes supporters.

In one case, a bus driver on Dublin’s posh southside stopped in the middle of traffic to roar “Catholic bigots” at a team putting up Vote No posters. Several passengers on the top deck opened their windows to hurl down similar abuse.

Another man in a different part of the country was putting up a poster on a lamppost late at night. Someone came out of a nearby pub and started furiously shaking the ladder because he objected to the No side putting up any posters.

In the end, many of our volunteers began putting up posters in the early hours of the morning rather than risk this kind of thing.

In many cases they might as well not have bothered. About a third of our posters were ripped down or defaced almost as soon as they went up. Nothing like this had ever before been seen in an Irish election or referendum campaign.

The vandals boasted about it on social media, posting pictures of themselves with torn down or defaced posters. Complaints about what was happening were made to the police. Absolutely nothing was done. The media took no interest either. The narrative that a vote for same-sex marriage was a vote for “love” and “equality” was not to be challenged, not even by the facts.

If the Australian political system is remotely fair, if the leaders of the Liberal party, the Labor party and the National party are at all interested in fair play and a fair go (a core Australian value I seem to remember), then they need to watch out for this kind of thing and stamp it out immediately.

If the debate is fair, or even approximates to fairness, then I believe that the No side in Australia has a much better chance of victory than we did because Australians might actually be able to hear both sides of the argument properly.

In Ireland, as I mentioned, every political party favoured same-sex marriage. So did all of the major media.

As in Australia, the big corporates were in favour and made sure everyone knew it. The head of Twitter in Ireland suggested a Yes vote would be good for business.

The former president, Mary McAleese, urged a Yes vote. Our presidency is a mostly ceremonial role and no past president had ever before urged people to vote a certain way on a given issue.

The police turned up at Yes campaign voter registration drives. The Garda Representative Association (the nearest thing our police have to a trade union) urged a Yes vote.

The Yes side received millions from an American foundation called Atlantic Philanthropies. This was not spent during the referendum campaign itself, but it was spent campaigning for a referendum.

To be fair to the leaders of the Yes campaign, they did not engage in the sort of daily abuse of their opponents that their foot soldiers engaged in. For example, they studiously avoided calling us “homophobes”, perhaps for legal reasons and perhaps because they thought it might be counter-productive.

Three of the leaders of the Yes campaign in their book, Ireland Says Yes: The Inside Story of How the Vote for Marriage Equality Was Won, set out their version of events.

In it, they are not abusive towards those of us who led the No campaign but they pay very little attention to the terrible atmosphere of fear that pervaded the campaign and that made it almost impossible for any but the bravest to admit they were No voters.

Instead, it is all about the triumph of “love”. The impression is even given that the victory was won by a plucky and resourceful few. Nothing could be further from the truth. As columnist Liam Collins wrote in The Sunday Independent, how could they not have won given everything they had on their side and also given the enfeebled state of the Catholic Church in Ireland?

In the referendum debate we devoted a lot of our time to the question of the rights of children and especially their right to be raised by their own mother and a father where possible. We had considerable success in making this a big issue and forced the other side to respond to our questions.

We tried to show that allowing same-sex marriage would give a same-sex couple the same legal right to have a child as an opposite sex couple. As a result of such a change, some children would be deliberately deprived of either a mother or a father as the case may be.

We pointed out that a Yes vote would also be a declaration that the natural ties are of little consequence given that two men or two women can’t both be the natural parents of the one child.

We would also inevitably be paving the way for surrogacy seeing as the only way two men could have a child (unless they adopted) would be through the use of a surrogate’s womb.

The Yes side accused us of being misleading. They said these things were happening anyway. Our response was that by enshrining same-sex marriage in our Constitution, we would be giving these things our ultimate seal of approval and it would be very hard to go back.

In any event, every jurisdiction that has redefined marriage has also redefined the rights of children at almost the same time. It is all part of a process, a radical reconfiguring of the family.

The Yes side also developed the mantra that “all a child needs is love” and therefore the sex of the parents or the natural ties don’t matter. We responded that the love of a mother is different from the love of a father.

We pointed to the irony that a movement dedicated to “celebrating difference” was telling us there is no real difference between men and women, a difference which is the most fundamental in human nature.

Our posters were mostly based on the theme of children and their rights. We believe that they had a certain resonance with swing voters, and with men in particular, above all middle-aged and older men who seemed most likely to vote No.

The posters annoyed single mothers. They were offended by the notion that children deserve a mother and a father. Many single mother are already alienated from the “traditional” family and this helped to explain both the high turn-out and the very high Yes vote in working class areas.

The single biggest problem we faced was that so many people had their minds made up before the campaign even began. The relentless, media-led propaganda campaign that had been waged for several years beforehand had seen to that.

We felt we did well in most of the radio and TV debates, but out of the two million people who voted, only a minority of those would have tuned into any specific debate. Many watched or listened to none at all.

This is why it was not an insubstantial achievement to persuade almost four in ten voters to vote No despite all the advantages the Yes side enjoyed.

The leaders of the No campaign in Australia should take heart from this. The weight of the Australian Establishment is on the Yes side, but not as overwhelmingly as in Ireland. The Churches in Australia (some of them anyway) seem more confident and up for the fight. In addition, the No side isn’t starting from as far back in the polls as we did.

I also hope and believe that the Australian love of fair play will ensure both sides are allowed a fairer hearing than was the case in Ireland.

In fact, if I was to leave the No side in Australia with only one piece of advice it is this; do everything you can to persuade the main political parties to play their part in ensuring a fair and balanced debate in which no one is demonised.

When huge numbers of voters feel they cannot express their opinion in public on issues as fundamental as the nature of marriage, the family, and the rights of children, we ought to know something has gone deeply wrong.

David Quinn is head of The Iona Institute and is a columnist with The Irish Independent and The Irish Catholic.
- See more at: http://www.mercatornet.com/conjugality/view/dont-demonise/17624#sthash.I0Milgp5.dpuf

I recently stumbled across a book about Ireland's referendum on same-sex marriage last year. Its message was that the supporters of Yes vote were the underdogs in a tough campaign. But because they were champions of love, their cause was irresistible. Their margin of victory was certainly impressive -- 62% to 38%.
However, David Quinn, an Irish journalist and the director of the Iona Institute, who helped to run the No campaign, tells a very different story in his article below.
During the four-week referendum campaign, tens of thousands of Yes voters up and down the country were to be seen sporting “Yes Equality” badges. Almost none of the almost three quarters of a million people who voted No did so. Why not? They were scared. They were scared of being called “homophobic bigots”. They were scared of being attacked by their friends, by their family, by passers-by on the street …
Australia will probably have a plebiscite on same-sex marriage, too. As it is only hold-out in the "Anglosphere", the result will resonate far and wide. I hope that readers there will are preparing for the campaign with Quinn's advice in mind.