The psychology of Trump voters

The psychology of Trump voters 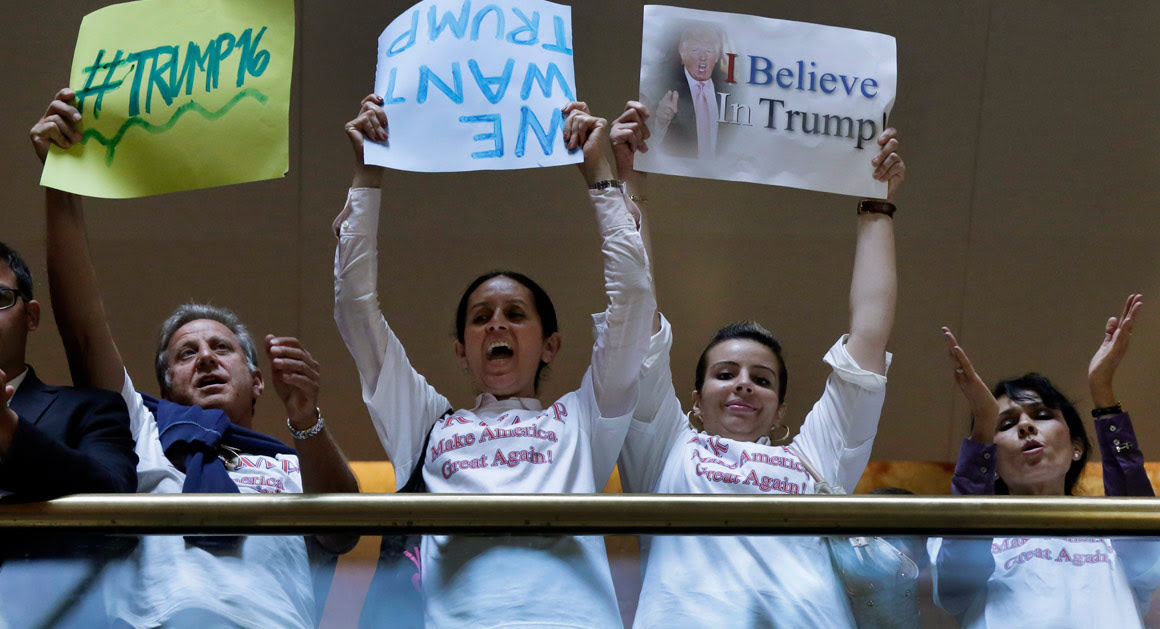 Why is Donald Trump faring so well in his campaign to be nominated as the Republic candidate for the US presidency? Commentators the world over are offering their theories, and strategists for other candidates are frantically trying to understand the attraction of the businessman turned presidential hopeful. Are his supporters making a rational choice based on an assessment of his economic or social policies? Or are they victims of their own emotions?

Oxford academic Neil Levy, who is also editor of the journal Neuroethics, regards them as irrational. He suggest that “prestige bias” is responsible for Trump’s popularity. Writing for the blog Practical Ethics, Levy states:

“…in addition to all these factors, a psychological mechanism may be playing a role in explaining Trump’s attractions to a substantial minority of voters. Trump is a very wealthy man. By one primary indicator, that means he is a successful person. We are often unable to judge accurately what makes a person successful. For this reason, we are disposed to imitate them… All kinds of things might play a role in causing success; sorting out what is cause and what is mere correlation is notoriously difficult. Better to imitate more widely: hence the evolution of our prestige bias.”

Levy suggests that his prestige bias theory explains why Trump has such a strong voter base among less educated Americans.

“It is worth noting that low information individuals – those with less capacity, due to limited resources or education – to identify what factors actually explain the success of individuals seem to be especially susceptible to the prestige bias…No doubt many factors, rational and irrational, explain why people consider voting for Trump. But the prestige bias may explain a great deal of his attractiveness.”

An interesting angle, though many beg to differ.

“none of the candidates peddle fear as well as Trump… He mixes anger, paranoia and xenophobia more skillfully than any modern presidential candidate…In short, the billionaire TV star is not running on a coherent set of political ideas. He is running on irrational fear, rage and prejudice.”

Oliver Wendell Holmes Jr may have been the most influential justice of the past 100 years to serve on the US Supreme Court. He was a Civil War hero, a law professor, the oldest justice ever, and the subject of a best-selling biography and a Hollywood film.
Next year will mark the 90th anniversary of his most famous case, Buck v Bell. The Supreme Court ruled in an 8-1 decision that compulsory eugenic sterilization was constitutional. Holmes wrote the majority opinion in his characteristically crisp prose. As a direct result, many more states passed eugenic laws mandating sterilization of “feeble-minded” men and women. Nazi Germany modelled its even harsher laws on American legislation.
His words summing up the argument for eugenics have become notorious for their cruelty:

It is better for all the world, if instead of waiting to execute degenerate offspring for crime, or to let them starve for their imbecility, society can prevent those who are manifestly unfit from continuing their kind. The principle that sustains compulsory vaccination is broad enough to cover cutting the Fallopian tubes. Three generations of imbeciles are enough.

The question that haunts the memory of Holmes is: how did he get it so wrong? How did America’s most eminent and admired jurist support an evil policy which played a part in the Nazis’ rationalisation of the Holocaust? Holmes may have been the only justice cited in defence of Nazi war criminals at the Nuremberg trials.
Holmes was not alone, of course. As we report in an article below, eugenics was a wildly popular policy in early 20th century America, especially amongst the better sort of people, like the Boston Brahmins into which Holmes was born. As we enter a new era of do-it-yourself eugenics with better technology for genetic editing, it is urgent to understand why our predecessors were so blind, lest we repeat their mistakes.

Sweden could ban surrogacy
by Michael Cook | Feb 27, 2016
Government report recommends a stop to both altruistic and commercial surrogacy
Is there a difference between genetic engineering and eugenics?
by Xavier Symons | Feb 27, 2016
It is an oft-raised concern that genetic engineering may one day morph into a eugenics movement.
Peter Singer under fire, again
by Xavier Symons | Feb 27, 2016
In an edition of the Journal of Applied Philosophy released this week, several academics discussed Peter Singer’s influential theory of “speciesism”.
The psychology of Trump voters
by Xavier Symons | Feb 27, 2016
Oxford academic Neil Levy suggests that “prestige bias” is one factor driving Trump’s rise.
Fancy a black eye?
by Michael Cook | Feb 26, 2016
What are the bioethics of tattooing one or both of your eyeballs?
Canada takes another step towards its euthanasia law
by Michael Cook | Feb 26, 2016
Report recommends most permissive options
Harvard’s dark past as the “brain trust” of American eugenics
by Michael Cook | Feb 25, 2016
Even the Supreme Court justice who wrote, "three generations of imbeciles are enough" was a graduate and former law professor.
Has the Zika virus changed Catholic thinking on contraception?
by Xavier Symons | Feb 24, 2016
In a word, no.
Interview: Carrie D. Wolinetz of the NIH on gene editing
by Carrie D. Wolinetz and Xavier Symons | Feb 23, 2016
In an exclusive interview with BioEdge, Dr. Carrie D. Wolinetz, Associate Director for Science Policy at the National Institutes of Health, discusses the ethical issues…
BioEdge
Suite 12A, Level 2 | 5 George St | North Strathfield NSW 2137 | Australia
Phone: +61 2 8005 8605
Mobile: 0422-691-615
Email: michael@bioedge.org
New Media Foundation | Level 2, 5 George St | North Strathfield NSW 2137 | AUSTRALIA | +61 2 8005 8605
Publicado por salud equitativa en 6:50