Sheila Reports promises a perspective here that you may not be getting in mainstream media and the politically charged blogosphere. Don’t expect political correctness, because politics doesn’t determine what’s correct. This space is grounded in the natural law and moral order. And it expects civility, goodwill and an openness to truth and reason. - See more at: http://www.mercatornet.com/sheila_liaugminas/view/is-hillary-clinton-losing-the-woman-vote/17583#sthash.kfPj6xxW.dpuf 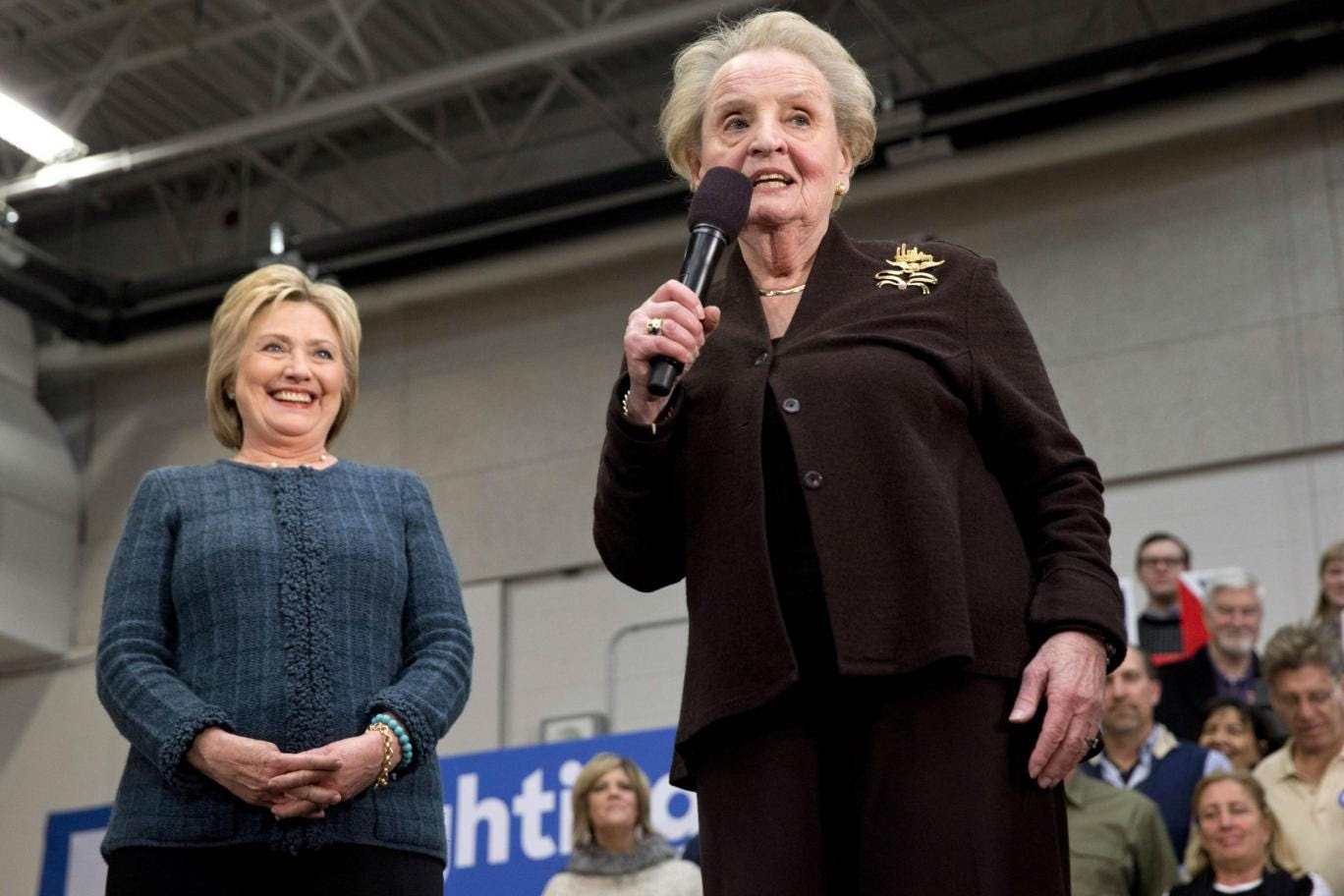 
High profile surrogates sound desperate, reach a new low.
That’s saying something for a woman candidate for president who earned and embraced the enthusiastic endorsement of the largest abortion provider in the world. But since that endorsement last month, Hillary Clinton’s poll numbers have continued to drop.
So over the weekend before Tuesday’s first election of the long primary season, two very high profile women of Hillary’s generation came out to stump for her, one on the campaign trail and the other on a popular liberal television show, and both in tandem delivered a memorable message that was shocking, revealing, and ultimately counter-productive. They were both condemnations of young women who don’t support Hillary Clinton. And did more than opposition candidates to damage her and the cause of women’s best interests.
The New York Times calls it a “rebuke” in the headline over the story of a generational clash, in which two “feminist icons”, Madeleine Albright and Gloria Steinam “called on young women who supported (Democratic Socialist candidate Bernie Sanders) to essentially grow up and get with the program.” As the caption on the photo tells it:
Madeleine Albright, the former secretary of state, told young women it was their duty to support Hillary Clinton in her presidential run at a rally in New Hampshire on Saturday.
That alone is, these days, unwise and unhelpful enough. But then she said this:
“We can tell our story of how we climbed the ladder, and a lot of you younger women think it’s done,” Ms. Albright said of the broader fight for women’s equality. It’s not done. There’s a special place in hell for women who don’t help each other!”
That was a stunner. Over the years, I’ve occasionally noted or lamented the final public end of a notable and esteemed public figure in broadcasting, other media, sports, politics or elsewhere where that person had made a name, record and reputation for a long time, only to go out sadly repudiated and disgraced by a random remark that was politically incorrect. Though I didn’t always agree with or appreciate Madeleine Albright’s statements or actions on a given policy, she served nobly and honorably at times for ‘the least of these’, as in her tenure as Ambassador to the United Nations under the Clinton Administration, when she issued a stinging rebuke to the UN Secretary General and the U.S. for their neglect to engage over war crimes in the genocide in Rwanda. She said then:
My deepest regret from my years in public service is the failure of the United States and the international community to act sooner to halt these crimes.
Which reflected deeply held principles about human life and the protection of vulnerable, innocent people.
That’s a far cry from what she said over the weekend to scold young women who don’t back Clinton’s candidacy, and warn them of the consequences.
“There’s a special place in hell for women who don’t help each other!”
How threatening, extreme and desperate that sounds. And how revealing of the whole false feminist, “pro-choice” agenda of Planned Parenthood and establishment abortion activists who actually only contend that there’s one choice, and it’s theirs. If your choice is pro-life, another candidate who didn’t get the endorsement of Planned Parenthood, you’re not only wrong and need to be rebuked, you’re going to hell.
Women are smarter than that, they know that they really do have choices and will make them according to what they determine is best for themselves, their health, their future and family, and without the dictates of angry, authoritarian women who tell them that women still need to follow ‘groupthink’ to be empowered. That just doesn’t work anymore. Years ago, former NARAL Pro-Choice America president Nancy Keenan watched the March for Life on the anniversary of Roe v. Wade, saw the tens of thousands of enthusiastic participants and said “There are so many of them and they are so young.”
They are not about to buy into threats of damnation for not backing the abortion movement’s godmother, Hillary Clinton, to be president of the United States.
And especially not responsive to ridicule by feminist movement founder Gloria Steinam, who appeared on the Bill Maher show and said that women become more active in politics as they get older, and that young women were supporting Sen. Sanders because the young guys were.
“When you’re young, you’re thinking ‘Where are the boys? The boys are with Bernie,’”…
To which Maher instantly replied that if he’d said that, he’s be smacked for such an offensive remark.
This is not helping women and women know it. They’ve either been through the feminist movement and had abortions and suffered the damage of that, or they’ve learned from those who have. They know they have choices and the best place to find options and alternatives for their health is with the true women’s movement of these times, in pregnancy health centers, and women’s health clinics, and organizations like Women Speak for Themselves.
One Democratic network news contributor said the barrier to the White House had been broken by Barack Obama. Then she shrugged off the Hillary Clinton candidacy saying it wasn’t necessary to vote for her just to prove a point that’s been made.
To insinuate, or worse, to state it as blatantly as Madeleine Albright and Gloria Steinam did so unwisely, that it’s now the necessary duty of women of all ages to vote for Mrs. Clinton to get the first woman president, betrays the agenda and ideology of the false women’s movement that promotes the idea of true freedom of choice, without backing it, no matter what women choose for themselves
- See more at: http://www.mercatornet.com/sheila_liaugminas/view/is-hillary-clinton-losing-the-woman-vote/17583#sthash.kfPj6xxW.dpuf

After the New Hampshire primary, if there is anyone who should be afraid, it is the panjandrums of political correctness, people who shut down debate by sneering, “You CAN’T say that!”
Not that I agree with either Bernie Sanders, who is far too socially progressive, or Donald Trump, who is far too divisive, to deserve election. But Americans are responding to their call for their very different political revolutions.
In a sense, both men are burning the same fuel that propelled Barack Obama into the White House: idealism, a sense of serving a great and noble cause. OK, “A future to believe in” may be corny and meaningless; and “Make America great again” may be corny and unrealistic. But they both strike a chord with voters.
There’s a lesson here for us dignitarians who believe in politically incorrect things like the dignity of life from conception to a natural death and the traditional family. Instead of giving up, we need to push ahead, respectfully, but vigorously and shamelessly. We have to learn from the Bern and the Donald. It’s time to be boldly countercultural.