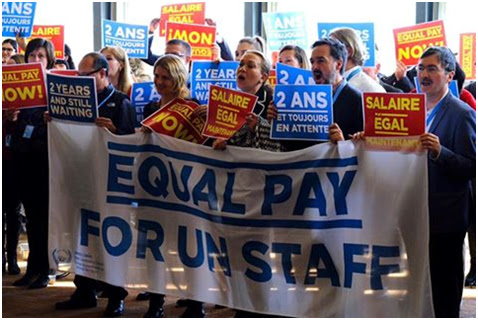 UNITED NATIONS, Feb 21 2020 (IPS) - The United Nations, which has long preached the irrefutable concept of income equality to the outside world, is now accused of condoning wage discrimination in its own backyard.

The message from the UN Staff Coordinating Council in Geneva was brutally frank—“protesting the UN’s hypocrisy” for launching “International Equal Pay Day*” while failing to reverse an illegal pay cut that has left 3,000 staff being paid 5 per cent less than colleagues on the same grades.
Ian Richards, President of the 60,000-strong Coordinating Committee of International Staff Unions and Associations (CCISUA), told IPS the UN’s International Civil Service Commission (ICSC), using questionable statistics, recommended cutting pay by 5 percent for all staff in Geneva.
But the Administrative Tribunal of the International Labour Organization (ILOAT), another Geneva-based UN agency, ruled the pay cut illegal and staff in specialized agencies had their pay restored.
However, UN Secretary-General Antonio Guterres in New York decided not to go along with the ILOAT judgement in restoring pay, and has asked the UN Dispute Tribunal (UNDT) to rule on this, he said.
“The problem is that the UNDT is so short of judges that two years on from the pay cut they are unable to provide a timeline for any decision,” declared Richards. 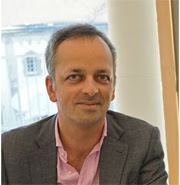 Ian Richards
Currently, the UN is also critical of unequal pay between men and women worldwide – both in public and private sectors — singling out the widely-prevalent practice as wage discrimination against women.


Asked if there are there any charges of unequal pay between men and women staffers in the UN system, Richards said male and female staff, working on staff contracts, get the same pay.
However, in some UN departments, he pointed out, consultants and contractors hired by the UN Office for Project Services (UNOPS) make up two-thirds of personnel.
“For these colleagues we suspect there is a massive gender gap as they must individually negotiate their pay. We have asked UN management to conduct a gender pay audit, but so far, they haven’t done anything’,” said Richards
Further, many of these “Uber-style contracts” don’t provide for social security, health insurance nor maternity leave.
“Given how many staff start out as consultants, it is no surprise that women might be at a disadvantage. And the more the UN moves towards flexibiliizaiton, the worse this will get. If the UN really cares about the gender pay gap, they should stop the Uberization of their personnel,” he noted.
In a statement released February 20, the Staff Coordinating Council said that UN Staff in Geneva occupied the staff canteen holding banners with the slogans:

A 5.2 % pay cut was imposed in February 2018 on all UN Staff and employees at specialized agencies such as the World Health Organization and the International Labour Organization.
This pay cut, said the Union, was declared illegal in July 2019 by the Administrative Tribunal of the International Labour Organization (ILOAT) which only has jurisdiction over the specialised agencies.
Crucially, staff directly employed by the UN were not covered by the ruling. This means they are now paid 5.2% less than agency colleagues on the same grades – a total loss of more than $20 million over the last two years.
Prisca Chaoui, Executive Secretary of the UNOG Staff Coordinating Council, said: “What makes this situation even harder for UN staff is the gaping chasm between the words and actions of the UN on the issue of Equal Pay”.
In December, the General Assembly adopted resolution 74/142 to establish International Equal Pay Day, calling on the world to support equal pay for work of equal value.
“The UN stands accused of hypocrisy for failing to ensure equal pay for its own staff,” Chaoui said.
In the statement, Richards said: “The astonishing admission from the UNDT that, right now, they don’t have the judges to hear our case means there is no end in sight to the UN’s equal pay scandal. Staff will take action and keep escalating action until we get justice on equal pay.”
The campaign for equal pay is being led by the United Nations Office at Geneva Staff Coordinating Council, supported by other local staff associations such as UNICEF, UNEP, UNDP and UNHCR.
Tatiana Valovaya, Director-General of the United Nations Office at Geneva, attended the protest and heard the staff calls for equal pay justice.
*The General Assembly on 18 December 2019 passed resolution 74/142 establishing International Equal Pay Day – link: https://undocs.org/en/A/RES/74/142
The writer can be contacted at thalifdeen@ips.org