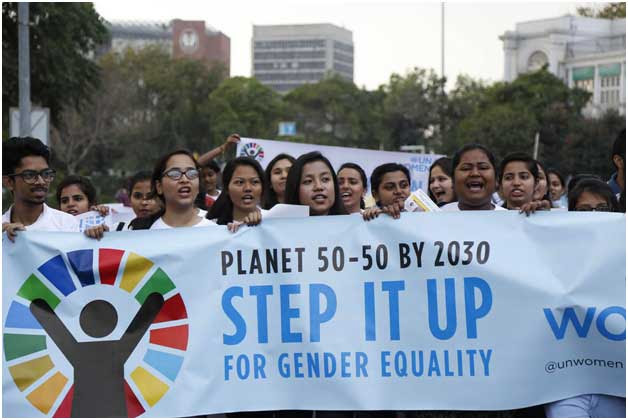 
While numerous development actors are engaged in projects around the globe that seek to achieve gender equality and empowerment of women and girls, governments and other agencies need to act fast and at scale to accelerate progress to ensure we become generation equality.


First, there needs to be political commitment by governments across the world to address gender inequality and women’s political participation. This can be in the form of women’s representation in parliament, gender responsive budgeting or advancing policies that protect the rights of women.
By February of 2019, only 12 countries — led by Rwanda with 61.3% — had over 40% representation of women in parliament. The proportion of ministerial posts held by women however remains low, at only one in five. France, Canada and Spain and more recently Scotland have all had cabinets with at least as many women as men.
Equal political participation by women and men needs to be the norm rather than the exception. Strategies that have worked include quotas for women’s representation, reforming pollical parties to be more gender equal, and ensuring a level playing field for women political aspirants.
Second, governments need to accelerate laws that protect the rights of women and girls. Without these laws, the efforts of organizations will not be sustainable as they are not protected under the law. Evidence shows that discriminatory laws still exist in many countries.
For example, the Women, Law and Business report 2020 shows that 90 out of 190 countries still have at least one restriction on the jobs women can hold. In terms of laws to redistribute women’s care work, more than half of the economies covered mandate paid leave specifically reserved for fathers, but the median duration of that leave is just five days.
Only 43 economies have paid parental leave that can be shared by mothers and fathers. This is despite research that shows law reforms and policies that empower women are not only good for women’s empowerment, but they also boost economic growth.
For example, when women can move more freely, work outside the home and manage assets, they’re more likely to join the workforce and strengthen the economy.
Third, we must address the harmful social and cultural norms and societal perceptions of women as laws by themselves are not enough in protecting the rights of women. Evidence from Bangladesh for example shows women who routinely wore burkah/hijab, and hence are more compliant with religious and cultural norms are less likely to be engaged in outside work.
In Kenya, while equal inheritance of land and other property is entrenched in the constitution, women own less than 7 percent of the land in the country, mainly due to cultural norms that still do not recognise the rights of women and girls to inherit land.
Engaging men, boys, traditional and religious leaders can change norms and practices that are harmful to women and girls. In countries like Zambia and Malawi, traditional chiefs have been instrumental in reducing forced and early child marriage.
And finally, we must invest in research and evidence to test what works, where we are making progress and where progress is not happening so as to inform future action. While there are indicators to track progress, the analysis of what is working in different contexts to achieve gender equality is not always that robust.
Tools like the Women’s Empowerment in Agriculture Index, tracks women’s empowerment in agriculture and shows the impact of different interventions on different indicators of women’s empowerment. Analysing data used to track SDG 5 on gender equality to track what is working and use the lessons for future implementation can help to accelerate progress.
While some progress has been made in addressing gender inequality in recent years, a big push in this last decade before the expiry in 2030 of the Sustainable Development Goals is clearly needed. Now we must use different tools than those which created the problem.

Jemimah Njuki is an expert on gender equality and women’s empowerment. She is an Aspen New Voices Fellow. You can follow her @jemimah_njuki