Reconciliation with the FARC: Lessons in tolerance: The Colombian letters sent to former FARC fighters | In English | EL PAÍS

Reconciliation with the FARC: Lessons in tolerance: The Colombian letters sent to former FARC fighters | In English | EL PAÍS 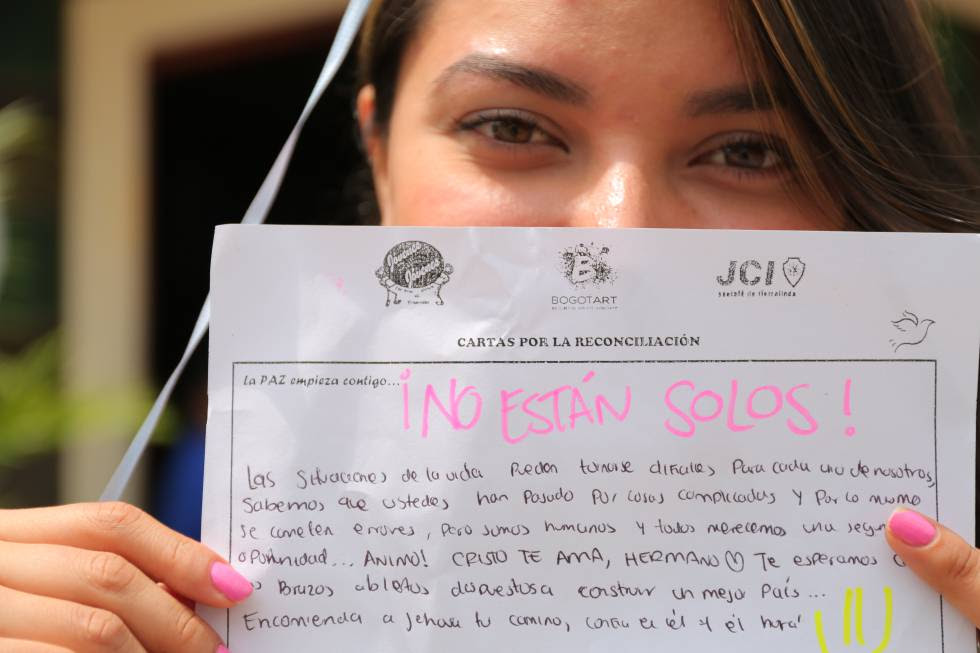 “I offer you a welcoming embrace, I am glad that we can count on you once more as part of our society.” “We are very happy to have you back. We hope that from now on, your life will change.” “We all have the right to a second opportunity. Welcome.” These are some of the messages from the Colombian people to the FARC’s 6,900 demobilized guerrilla fighters. They are lessons in tolerance summed up in dozens of letters that youth groupshave been collecting all over the country. The goal: to show that Colombia wants peace, but also inner reconciliation.

Crying over my father is not going to bring him back, but I want to tell his killers that I forgive them

“In a country with a divided society, it is important to find symbols that can bring us together, that will help us find common ground where we call all work together,” explains Leonardo Párraga, director of the youth foundation BogotArt and one of the drivers of the Letters for Reconciliation initiative.
This citizen project aims to help the peace process by showing support for demobilized guerrilla fighters. Since early February, activists have been encouraging Colombians to write a letter to some of the guerrilla members who have been congregating for three months in one of the 26 “normalization zones,” where they wait to turn in their weapons and join civil society again.
The letters have been collected through a website and via some of the mailboxes set up in cities such as Bogotá, Cali, Manizales, Medellín or Barranquilla.
“On the streets we have seen some people get upset when we mention the demobilization issue, but they’re just a minority. People generally want to participate. To some it’s been a spiritual liberation of sorts. In a way, they have been able to achieve self-forgiveness and self-reconciliation,” says Párraga.
Some of the messages are heartrending. “My father was assassinated at the Santander massacre in Quilichao. Crying over him is not going to bring him back, but I want to tell them [his killers] that I forgive them, because it is useless to hold on to bad feelings,” reads a letter written by a young woman from the Cauca department.

It is impossible to explain the feelings you can experience in just a few hours, from fear to joy

MANUELA JIMÉNEZ, POLITICAL SCIENCE STUDENT
The goal of the project is to hand-deliver each of these letters in the normalization areas, so the guerrilla members can read them out loud. This has already been done in the area of Caldono, in the Cauca valley, still home to 500 former combatants. Several student groups braved the mountain wilderness to reach the heart of the FARC campsite, bearing handfuls of letters.
“It is impossible to explain the amount of feelings that you can experience in just a few hours, from fear to joy,” says Manuela Jiménez, a political science student.
To many of these youths, the chance for a one-on-one encounter with these ex-combatants has been a cure against prejudice and the rhetoric of rejection that has been dividing Colombian public opinion for the last year.
“I realized that, in reality, those people whom I often viewed as monsters and came to hate are also human beings,” said Jiménez.
“I never thought that anybody would be willing to forgive my mistakes, but now I know there is a society out there waiting for us with open arms,” wrote a former guerrilla fighter on the back of a letter. “All I know how to do is to grow crops and wield weapons, but for the sake of peace I can learn a dignified job.”
English version by Susana Urra.

As end to conflict approaches, FARC opens its conference to the world

“Colombians will not understand those who want to stop history”
Publicado por salud equitativa en 6:04