Chastity, family life and the future of religious freedom

Chastity, family life and the future of religious freedom

Science supports chaste family culture, but it must have freedom.

Photo: Samantha Reinis/The Daily Signal
The family is the most sexual of all organizations. But given the sexual chaos of modern times, new families who want to succeed in their task of child-raising must quickly find a community of other families of like mind.  They are most likely to find such families at their place of worship if the sexuality taught there is a family and child centered sexuality.
The data show (see chart below) that central to family sexuality is an ethos of chastity, necessary for marital unity and stability and out of which flow myriad benefits.  Without chastity the family is no more a thriving family than a monastery without celibacy is a monastery.
Chastity is now central to the public argument for religious freedom because such families need their freedom of association and freedom of action to raise the next generation to live the same strong family life.  They need freedom to teach their own way of life: marriage till death do us part, and raising their children to do the same.  Much as the Amish fought and won their freedom of association and way of life, so too other religious communities are now finding they too must fight and win a freedom which they had assumed was theirs without asking.  It had been so.  It is no longer.
If we want our religious freedom we have to be able to make the argument for teaching chastity as a way of life, not as a “risk reduction strategy”.  Chaste family life is easy to defend in the public debate because it is far superior to all other ways, by any measure of human thriving.  Teenagers (who have yet to experience life and learn its hard lessons by experience) need to understand that there are lifelong consequences for “sowing wild oats”, as the most important chart in all the social sciences makes clear: 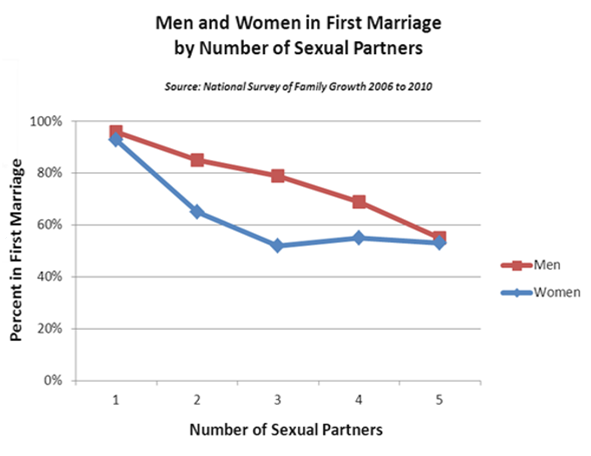 They need to be very familiar with the data (with the lessons of life experience) that the totally monogamous couple (only sexual partner ever: their spouse) is the least likely to divorce – by far. And that one third of women who have had only one other sexual partner (normally before marriage) are likely to divorce within five years, and that those who had two such sexual partners (other than their husband – again most likely before marriage) have a fifty percent chance of divorce within five years — and that half of their children will be raised without their father present.
Chastity may be difficult but it is central to a family-centered life.  And it is also central to justice for children.  There is no free lunch on this issue, not for teenagers, adults nor for society itself.
If churches and parents do not make the strongest case possible for the chastity-based family (and on its fruits and benefits it is an easy case to make) they will not get their religious freedom.
The rest of society may think such families are weird (despite the data) but they will likely respect them for the path they have chosen.
The future of the First Amendment rests on the freedom to teach the centrality of chaste family life.   We will not win I if we are ambivalent or shy.
Pat Fagan is the director of the Marriage and Religion Research Initiative at The Catholic University of America. He is publisher and editor of Marripedia.org. Republished from the MARRI blog with permission.
“Now that you’re here …  we’ve got a small favour to ask. More people are reading MercatorNet, but far fewer are donating. Unlike many online magazine, we haven’t put up a paywall and we don't have lots of obtrusive advertising. So you can see why we need to ask for your help.
MercatorNet’s independent, vibrant and informative articles take a lot of time, money and hard work to produce. But we do it because we believe our views on human dignity matter – and because they might be your views as well.

If every fan of MercatorNet donated just $10, our future would be much more secure.


We make a big thing of marriage and parenthood on MercatorNet, and rightly so: the family is at the heart of society and of our mission and it needs to be vigorously defended today. But not every adult will be married or should be married. Singlehood is a valid and important way of life that complements marriage in building up society and can be lived generously and joyfully, either while preparing/hoping for marriage or as a permanent state.
Last week we ran an article about a German study that showed single people are much more likely to be lonely than those married, and to suffer ill health. That was particularly true of those who lived alone, which of course is not the necessary consequence of being single. Anyway today we hear from two women living the single life in different ways. Cristina Montes, a law professor in the Philippines, speaks up for the single state in general. Chiara Bertoglio, an Italian musician and contributor to MercatorNet, shares something of her own life and its many opportunities for self-giving even as she remains open to the prospect of marriage. I thank them both for speaking so well about a state that I share with them.