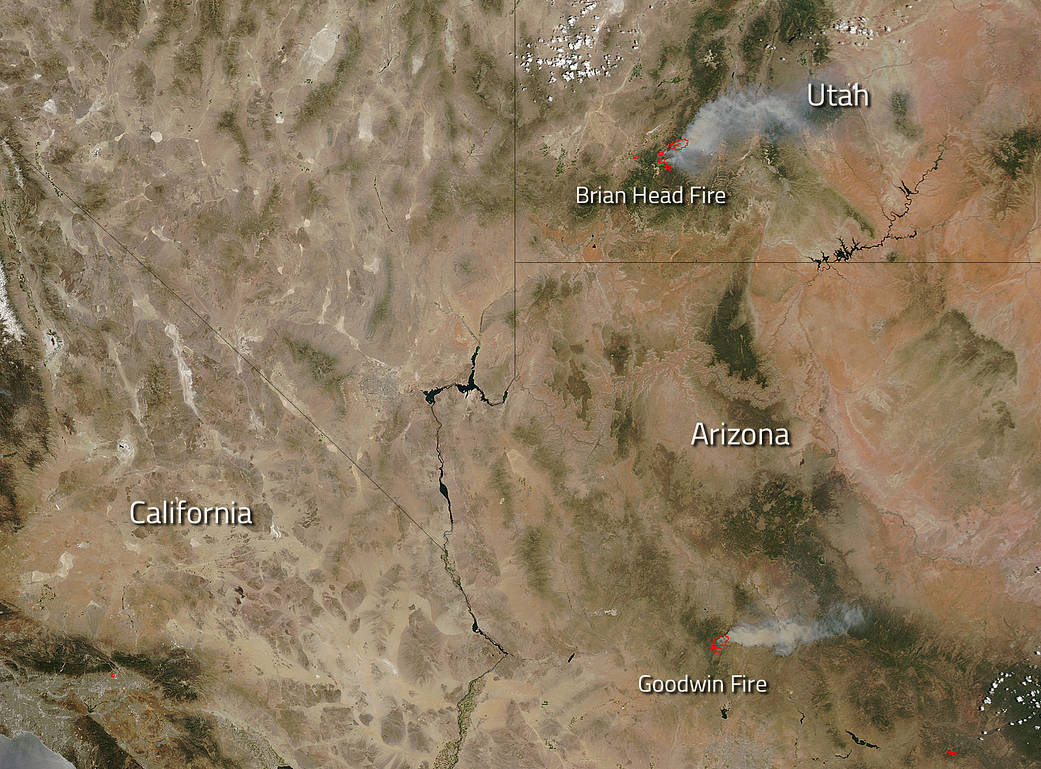 The Brian Head Fire in Utah began on June 17, 2017 and was started by human action. An update to this fire was posted on June 26, 2017.  Currently as of June 28, this fire is now 49,626 acres and is still at 10% contained.  Weather forecasts are not helping with red flag conditions predicted for tomorrow which could produce extreme fire behavior with crowning, long range spotting and group torching.  Hot, dry conditions are predicted to continue into the weekend.
The Goodwin Fire in Arizona began on June 24, 2017 and the cause of the fire is currently unknown.  At this time the fire is 18,000 acres in size and is only 1% contained. The fire is very active with uphill runs, short range spotting and crowning.  Crowning fire is fire which burns through the top layer of foliage on a tree. Crown fires are the most intense type of fire and often the most difficult to contain, but they need strong winds, steep slopes and a heavy fuel load to continue burning.  Poor humidity recovery and high temperatures allowed the fire to actively grow by early morning. West southwest winds continue to blow over the area.  Extremely hot and extremely dry conditions with high winds (temps 92-100 with relative humidity 2-10%  and ridge winds from SW 7-12 mph gusting 25-30 mph) continue to fuel this fire and contribute to its spread.
NASA's Aqua satellite collected this natural-color image with the Moderate Resolution Imaging Spectroradiometer, MODIS, instrument on June 27, 2017. Actively burning areas, detected by MODIS’s thermal bands, are outlined in red. NASA image courtesy Jeff Schmaltz LANCE/EOSDIS MODIS Rapid Response Team, GSFC. Caption by Lynn Jenner with information from Inciweb.
Editor: Lynn Jenner
Publicado por salud equitativa en 13:05