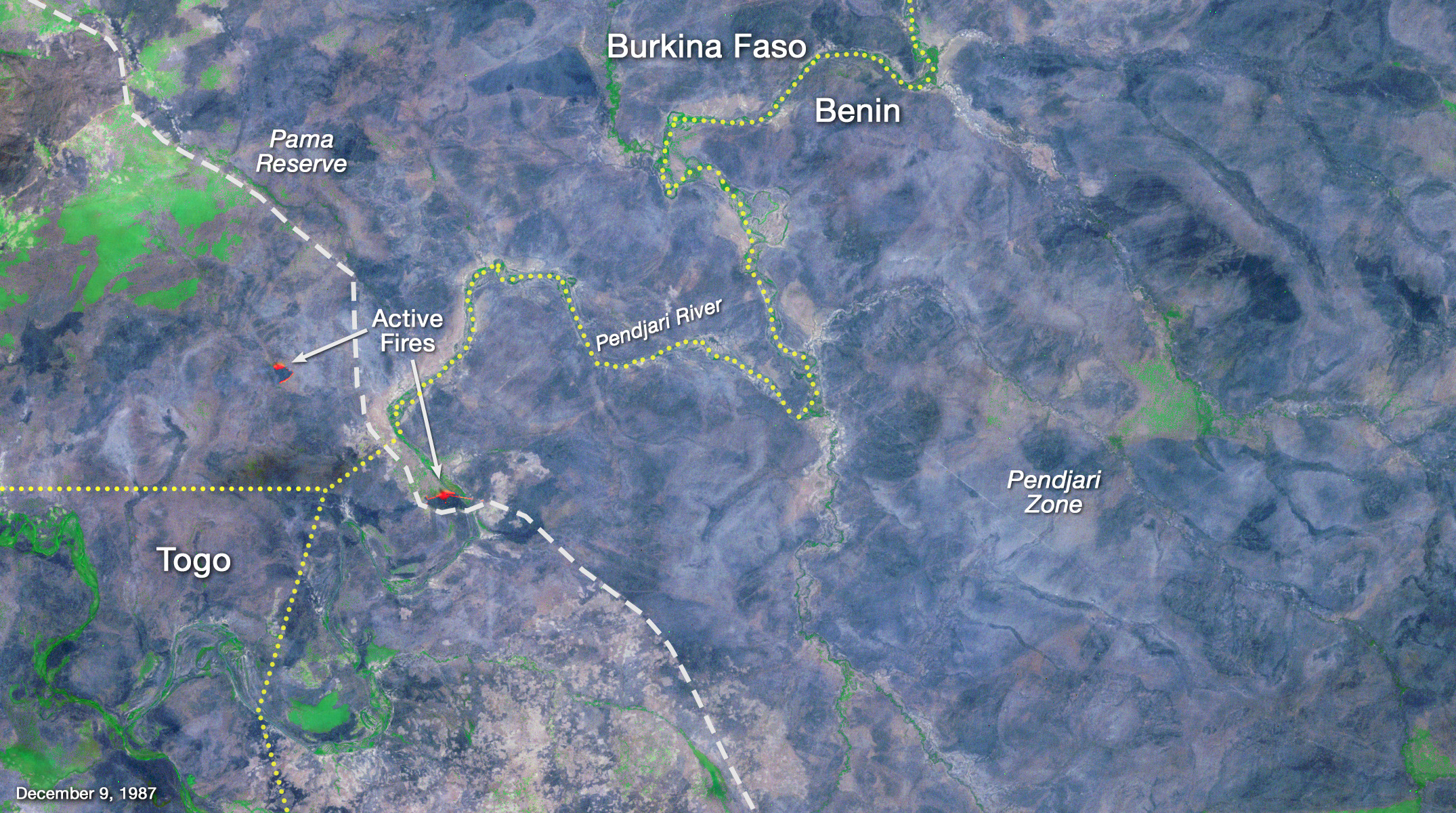 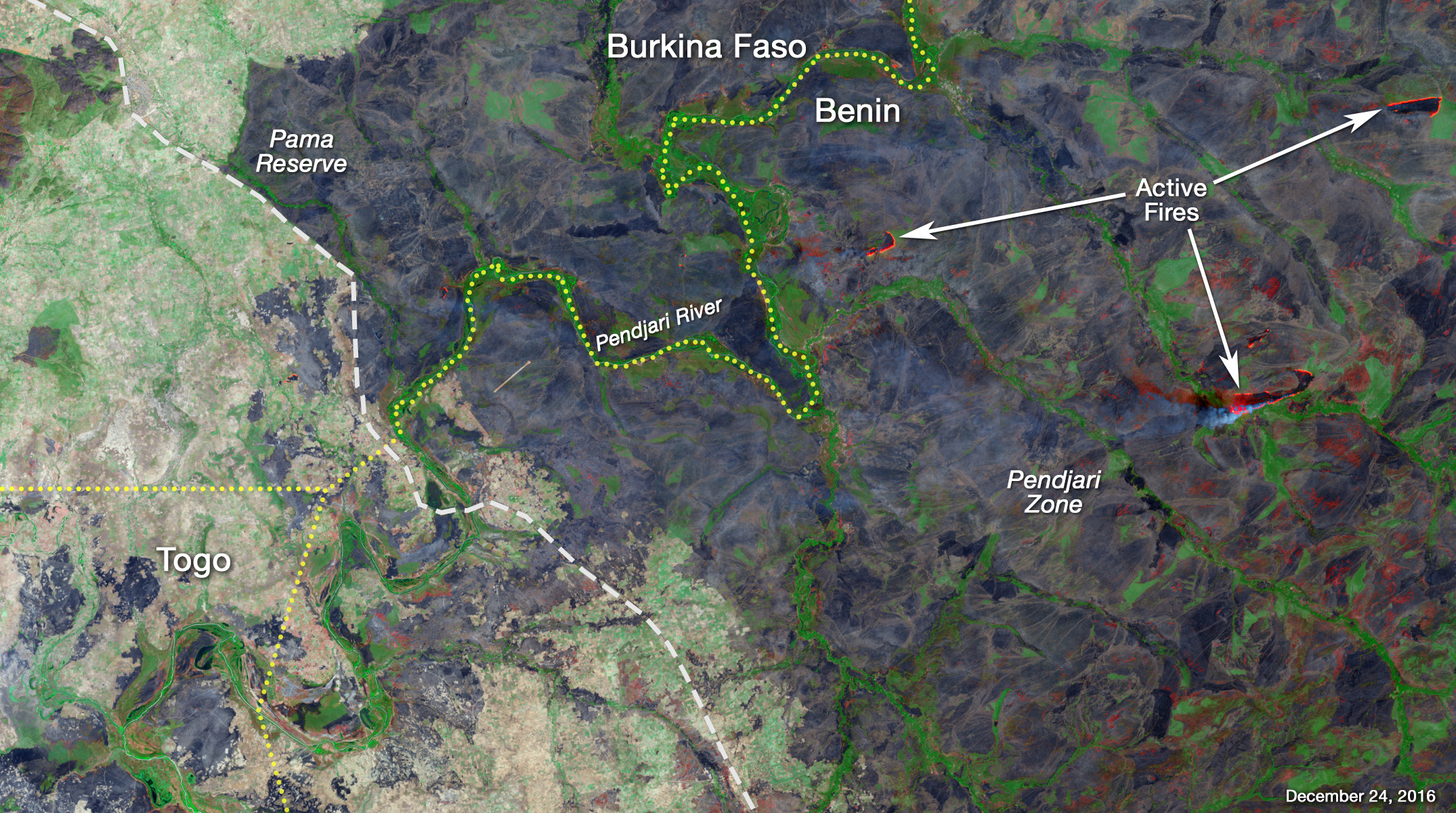 Show only LeftShow only Right
False color Landsat 8 images compare a region of Burkina Faso and Benin in 1987 and 2016. In the later image, fires have burned in a savanna preserve but not in the neighboring farmland. Scientists studied the fire trends using satellite data, and also measured air quality using instruments such as Measurements of Pollution in the Troposphere (MOPITT) and the Multi-angle Imaging SpectroRadiometer on the Terra satellite.
Credits: Landsat/NASA
Shifting livelihoods across the tropical forest frontiers of South America, the Eurasian Steppe, and the savannas of Africa are altering landscapes and leading to a significant decline in the amount of land burned by fire each year, a trend that NASA satellites have detected from space.
The ongoing transition from nomadic cultures to settled lifestyles and intensifying agriculture has led to a steep drop not only in the use of fire on local lands, but in the prevalence of fire worldwide, researchers at NASA's Goddard Space Flight Center in Greenbelt, Maryland, and colleagues found.
Globally, the total acreage burned by fires each year declined by 24 percent between 1998 and 2015, according to a new paper in Science that analyzes NASA’s satellite data, as well as population and socioeconomic information. The decline in burned lands was largest in savannas and grasslands, where fires are essential for maintaining healthy ecosystems and habitat conservation.
Across Africa, fires typically burn an area about half the size of the continental United States every year, said Niels Andela, a research scientist at Goddard and lead author on the paper. In traditional savanna cultures with common lands, people often set fires to keep grazing lands productive and free of shrubs. As many of these communities have shifted to cultivate more permanent fields and to build more houses, roads and villages, the use of fire declines. As economic development continues, the landscape becomes more fragmented, communities often enact legislation to control fires and the burned area declines even more.
By 2015, savanna fires in Africa had declined by 270,000 square miles (700,000 square kilometers) — an area the size of Texas.
“When land use intensifies on savannas, fire is used less and less as a tool,” Andela said. “As soon as people invest in houses, crops and livestock, they don’t want these fires close by anymore. The way of doing agriculture changes, the practices change, and fire  slowly disappears from the grassland landscape.” 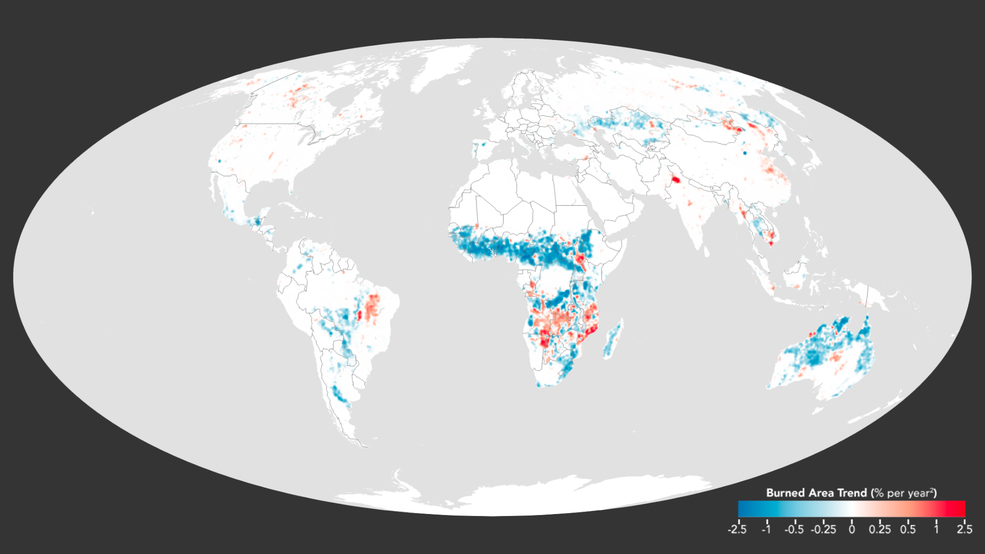 The global area of land burned each year declined by 24 percent between 1998 and 2015, according to analysis of satellite data by NASA scientists and their colleagues. The largest decline was seen across savannas in Africa, and due to changing livelihoods.
Credits: Joshua Stevens/NASA’s Earth Observatory
Andela and an international team of scientists analyzed the fire data, derived from the Moderate Resolution Imaging Spectrometer (MODIS) instruments on NASA’s Terra and Aqua satellites, as well as other sources. They compared these datasets with trends in population, agriculture, livestock density and gross domestic product.
The scientists found a different pattern in the rainforests and other humid regions close to the equator. Natural fires are rare in tropical forests, but as people settle an area they often burn to clear land for cropland and pastures. After the land is first cleared, as more people move into the area and increase the investments in agriculture, they set fewer fires and the burned area declines again.
The impact of human-caused changes in savannas, grasslands and tropical forests is so large that it offsets much of the increased risk of fire caused by warming global temperatures, said Doug Morton, a research scientist at Goddard and a co-author of the study. Still, the impact of a warming and drying climate is seen at higher latitudes, where fire has increased in parts of Canada and the American west. Regions of China, India, Brazil and southern Africa also show an increase in burned area. But the expansiveness of savannas and grasslands puts the global trend in decline.
“Climate change has increased fire risk in many regions, but satellite burned area data show that human activity has effectively counterbalanced that climate risk, especially across the global tropics,” Morton said. “We’ve seen a substantial global decline over the satellite record, and the loss of fire has some really important implications for the Earth system.”
Fewer and smaller fires on the savanna favors trees and shrubs instead of open grasslands, altering habitat for the region’s iconic mammals, like elephants, rhinoceroses and lions.
“Humans are interrupting the ancient, natural cycle of burning and regrowth in these areas,” senior author Jim Randerson, a professor of Earth system science at the University of California, Irvine, said of the African savannas. “Fire had been instrumental for millennia in maintaining healthy savannas, keeping shrubs and trees at bay and eliminating dead vegetation.”
There are benefits to fewer fires as well. Regions with less fire also saw a drop in carbon monoxide emissions and an improvement in air quality during the peak of the fire season, confirming the burned area trends using data from other NASA satellites. With less fire, the vegetation in savannas is also able to build up — taking up carbon dioxide from the atmosphere, instead of releasing it into the atmosphere during fires. The 24 percent decline in burned area may have contributed about 7 percent to the ability of global vegetation to absorb the increase in carbon dioxide emissions from burning fossil fuels and land use change.
The decline in burned area from human activity raises some difficult questions, Morton said: “For fire-dependent ecosystems like savannas, the challenge is to balance the need for frequent burning to maintain habitat for large mammals and biodiversity, while reducing fire on the landscape to improve air quality and protect people’s property and agriculture.”
As these savannas and grasslands continue to develop and agriculture intensifies, however, the researchers expect the global decline in fires to continue. It’s a trend that should be incorporated into computer models that forecast climate and carbon dynamics, Morton said.
“The loss of fire from agricultural landscapes has a big impact on communities and ecosystems. Looking ahead, models that account for changes in fire activity from human management will help us understand the feedbacks from fewer fires on vegetation, air quality and climate,” he said.
For more information and to explore the data:
https://www.globalfiredata.org
Banner Image: Fires in the savanna, like this one in South Africa, burn quickly through grasses, and help prevent trees and larger shrubs from taking root.Banner Image Credits: Guido van der Werf / Vrije Universiteit Amsterdam, the Netherlands
By: Kate RamsayerNASA’s Goddard Space Flight Center, Greenbelt, Md.
Editor: Sara Blumberg
Publicado por salud equitativa en 13:04