Borough Market: Spanish victim of London attack was a banker who fought terrorism for years | In English | EL PAÍS

Borough Market: Spanish victim of London attack was a banker who fought terrorism for years | In English | EL PAÍS

Madrid 9 JUN 2017 - 06:27 ART
Whatever thoughts went through Ignacio Echeverría’s head on the night of the London attack on June 3, he took them to the grave with him. He and his friends Guillermo and Javier were looking for a place to have dinner after a skating session near Tate Modern, where they’d filmed some of their moves. 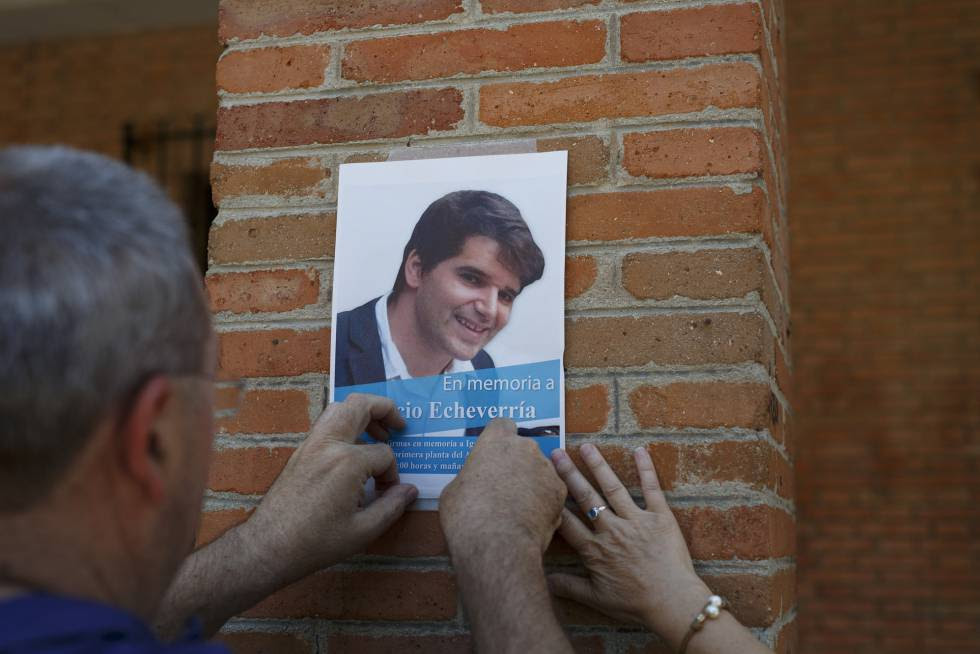 
They had met eight months earlier at a skate park in London. On the night of the terrorist attack, the three skating pals rented public bicycles and headed for Whitechapel to grab a bite. But two kilometers into their ride, they saw something that made them stop.
A man was hitting a police officer. According to relatives’ accounts, the friends saw that the officer was unarmed and that his helmet had slid over his face. But he was not being punched – he was being stabbed. When the officer lay motionless on the ground, the attacker turned on a nearby woman. That is when Echeverría stepped in.

I never used the word ‘hero’ before, but now I will use it every time I talk about him

RAFAEL DUARTE, FRIEND
It all happened in a matter of seconds. Rafael Duarte, a friend of his, says he is convinced that Ignacio did not know there were two more terrorists in the vicinity. He did not see them coming. His family has heard two versions of events: Guillermo says he saw Ignacio get stabbed once. Other witnesses assert that he was stabbed twice.
Guillermo and Javier decided to run for their lives. Now they worry that people back in Spain will think that they abandoned their friend to his fate. Echeverría’s family has sought to put their minds at ease: who could expect someone to take on three armed terrorists with their bare hands?
Other people attempted to help Echeverría. A few youths who had taken refuge in nearby bars tried to go out and assist him, but establishment owners refused to open their doors.

Ignacio Echeverría died in Borough Market at the age of 39, but his family takes consolation in the fact that in the approximately 40 seconds that the attack lasted, most of the people in the crowded street were able to take cover. In this sense, he may have saved dozens of lives.
“I never used the word ‘hero’ before, but now I will use it every time I talk about him,” said Duarte.

From Galicia to Madrid

Known as Echeve to his friends, the victim was born in the Galician city of El Ferrol and lived until the age of nine in As Pontes, around 30 kilometers inland, where his father Joaquín worked as an engineer at the local power plant. His teenage years were spent in the upscale Madrid suburb of Las Rozas, where he developed a passion for skating.
He had a bachelor’s degree in law, spoke four languages and followed current affairs with great interest. His friends say that he was shy and somewhat reserved, but did not shy away from political debate. A close friend remembers him as “pro-European through and through; he could not stand populism and celebrated Macron’s victory [in the French election] because it prevented [National Front leader Marine] Le Pen from reaching power.”

PACO SOLER, FRIEND
His professional career began at the Madrid branch of the French bank Natixis. He was later hired by Banco Popular, where his former colleagues remember that he would read the Financial Times every morning. “He was the only one,” says a friend with a nostalgic laugh.
His new duties involved adapting EU directives against corruption, money laundering and terrorist funding. Echeverría monitored and assessed suspicious transactions, and spent hours poring over the paper trail of large financial movements from Yemen, Lebanon, Iran ana Saudi Arabia. He was familiar with the dealings of terrorist groups, and had traveled on several occasions to Algeria to negotiate with other banks.
He next worked for the Spanish Arab Bank, but disagreement with his superiors led him to quit. “He was a guy with very clear ideas who would not keep quiet even if he was standing in front of someone with 40 years experience,” recalls Paco Soler, another friend of the deceased.

Soler remembers how one day, Echeverría got into an argument with a superior to defend the work he was doing. “He followed his ideas through to their conclusion. That is why I am not surprised at what he did.”
Echevarría stood in line outside the unemployment office until a little more than a year ago, when he moved to London. His two sisters were already living there. He landed a job at HSBC, and went down to the City every day. On many afternoons, he would go skating.
“Outside of work he was a real skater,” says a friend from Las Rozas. “So elegant and serious-looking at work, and then you’d see him in his sneakers, holding his skateboard. He was a great guy.”
But “good” is the adjective that crops up the most in reference to Echeverría. A relative who would rather not give out his name insisted that he was “a principled person, all goodness. He was the most upright person I have ever met.”


Guillermo and Javier are worried people back in Spain will think that they abandoned their friend to his fate
He was a practicing Catholic, as are his parents, and often spoke proudly about his great uncle Antonio Hornedo, who had been a Jesuit missionary in Peru.
After days of uncertainty when Ignacio was officially described as missing, the family can now start to mourn. They are now waiting for Ignacio’s body to be repatriated, so they can start to get some closure.
English version by Susana Urra.

London victim’s friend: “The last time I saw him, he was on the ground holding his skateboard”


Jihadist terrorism: Could there be a new attack on Spanish soil?