Move could isolate and wrong-foot opposition, which lacks the regime’s nationwide support structures

ALFREDO MEZA
MAOLIS CASTRO
Caracas 2 MAY 2017 - 05:57 ART
After a month of protests calling for his resignation that have left at least 29 people dead, Venezuela’s President Nicolás Maduro is attempting to consolidate his hold on power by convening a National Constituent Assembly to rewrite the South American country’s Constitution. 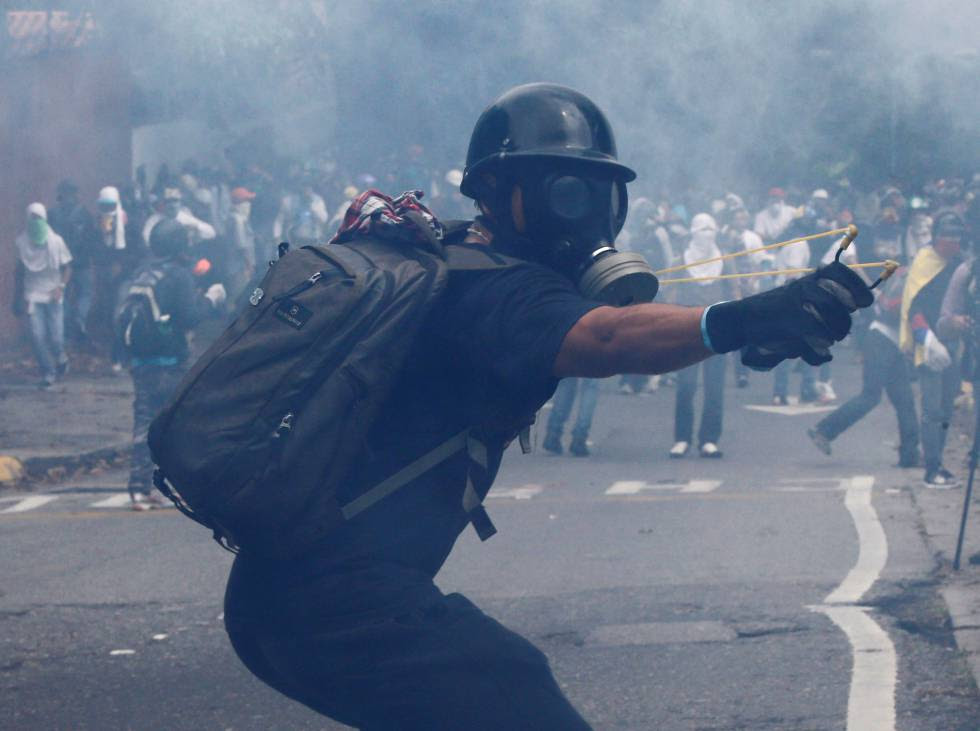 
The new Constitution would be written by some 500 delegates, half of whom would be from the so-called National Communal Parliament, set up by the Maduro administration after it lost control of the National Assemblyto the opposition in late 2015. Since former president Hugo Chávez’s United Socialist Party of Venezuela took power 18 years ago, it has set up a nationwide network of communal councils, ostensibly to give people greater say over local affairs, but that now forms the basis of a parallel legislature. Such councils are made up of the direct beneficiaries of the so-called Bolivarian Revolution.
“It will be a citizen assembly and it will be Chavista, within which the old party political structures will not be involved,” said Maduro on Monday. The other 250 assembly members will be chosen by voters at municipal elections.
The protests on Monday were met with tear gas and baton charges by military police
At the same time as Maduro was announcing this latest move to isolate the opposition, protesters led by the MUD coalition of parties were attempting a march on the Supreme Court and the National Election Commission in the center of Caracas, but came up against military police who fired tear gas and beat them back.
Miguel Pizarro of the Primero Justicia (First Justice) party said shots were fired into the air and tear gas thrown at protesters from the La Carlota air base. At least 33 demonstrators were injured, while hundreds more were trapped in the narrow streets off the main Castellana boulevard in the northeast of the city where they were tear-gassed.
Maduro’s move was not entirely unexpected. On Sunday, Julio Borges, the president of the opposition-controlled National Assembly, said the regime intended to set up an unelected “communal assembly.”
“This decision would accentuate the coup carried out by the Maduro government at the beginning of April,” he said, referring to two Supreme Court sentences that arrogated the legislative functions of the National Assembly.
The opposition has called for the street protests to continue
The opposition, which lacks a nationwide structure like the communal assemblies, reacted quickly on Sunday to Maduro’s announcement. Henrique Capriles, the governor of the state of Miranda, and a former presidential candidate, called on Venezuelans to “ignore this crazy idea” and to continue the street protests of the last month.
Speaking at a press conference on Monday, Borges accused Maduro of “dissolving democracy and the Republic.” He described the proposed assembly as “a fraud to trick the people with a mechanism that simply aims to deepen the crisis in Venezuela.”
Borges also called on Venezuela’s armed forces “not to back this kind of lunacy,” adding: “What is happening today is the worst coup against the Constitution. You have to play a role so that the solution is convening elections. You cannot stay silent while the Constitution is trampled on.”
The opposition said it would be calling opponents of the government out on to the streets early on Tuesday morning, telling them to stand on the streets near to their homes for two hours. The protests bring to mind the attempts to close main roads during the first quarter of 2014, which ended in violence, but the leadership has insisted the protest remain peaceful.
A symbolic session of the National Assembly will be held on Tuesday afternoon to remind the government that it remains active despite the blow the new National Constituent Assembly supposes.
English version by Nick Lyne.

Defiant Venezuelan opposition to push on with protests against president