Family Edge looks at news and trends affecting the family in the light of human dignity. Our focus is the inspiring, creative, humorous, annoying, ridiculous, and dangerous ideas in the evening news. Send tips and brainwaves to the editor, Tamara Rajakariar, at tamara.rajakariar@ mercatornet.com - See more at: http://www.mercatornet.com/family_edge/view/reducing-youth-aggression-isnt-as-easy-as-kumbaya/17317#sthash.6VAajxAV.dpuf 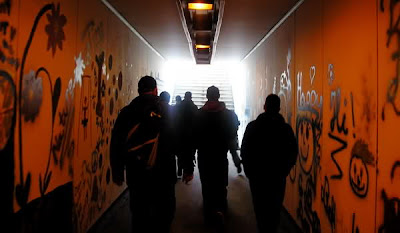 As crime rates continue to rise in many cities, the media continues to debate how to curb violent behavior before it starts. A Wednesday column entitled “Parenting with Pete” in a New Jersey newspaper exemplifies a typical response.

“Stopping violence needs to begin long before a teenager or adult picks up a gun and decides to shoot another human being,” writes Peter Herbst. Herbst argues that we should “commit to reducing the violence in our own lives and promote peace and compassion instead,” and makes a number of suggestions: “Don’t gift violent computer games”; “Learn, practice and teach conflict resolution skills”; “Express love for your children with hugs, kisses and nurturing words”; “Empathize with the suffering of other people.”

Fine suggestions, all, but research suggests that the “nurturing words” promoted by media are a band-aid for a problem that runs much deeper.

Psychologists worry about aggressive children—and with good reason. In a recent study, researchers at Towson University in Maryland explained the urgent need for a deeper understanding of the problem:

“Aggressive children who bully peers and make trouble for teachers and neighbors are more likely than other children are to have difficulties both as a child and as an adult. They are more likely to have problems with academic work and peer relationships and display antisocial behavior, juvenile delinquency, conduct disorders, and drug abuse during adolescence. As adults, aggressive children are more likely to suffer substance abuse, alcoholism, accidents, unemployment, divorce, and physical and psychiatric illness, commit delinquent and violent behavior, and require more social and remedial services.”

To better understand the social circumstances that foster such aggression, the researchers look for correlations between psychological development and the home lives of 701 boys and 708 girls from 62 census tracts in Baltimore as they move from first grade into middle school. Their analysis suggests that when marriage bells stop ringing in a neighborhood, the children in that neighborhood turn mean.

For the boys in the study, the Towson scholars find that “high levels of male employment and median income are related to lower levels of aggressive behavior over time, while high levels of neighborhood violence and percentages of single males and female-headed households are related to an increase in aggressive behavior.” When they shift their attention to the girls in the study, the researchers find essentially the same pattern. However, in the data for the girls, the researchers see statistical measures linking aggression to neighborhood characteristics that are “higher and more robust than those for the boys.” The breakdown of family life appears to be particularly important as a cause of girls’ aggressiveness: the researchers report that “the percentage of single men and mother-alone families rival neighborhood violence as providing the most explanatory power” in their statistical model for aggressiveness among girls.

If Americans want to subdue the inner-city aggression that has sent far too many young people to prison and early graves, it may take more than teaching students the words of “Kumbaya.” It may take preachers, teachers, parents, and civic leaders affirming wedlock as a cherished part of urban culture.

This article has been republished with permission from The Family in America, a publication of The Howard Center. The Howard Center is a MercatorNet partner site.
- See more at: http://www.mercatornet.com/family_edge/view/reducing-youth-aggression-isnt-as-easy-as-kumbaya/17317#sthash.6VAajxAV.dpuf

When Gloria Steinem’s new book – the first in 20 years – came out recently and I realised she had entered her eighties, I was keen to know whether the years and the issues now facing women had changed her views on the agenda of 1970s feminism at all. My findings are in the review article today, My Life on the Road, but, in brief, the answer is no.
To find that out, however, I had to read a lot about her early life (which is interesting, and moving) and her life as an itinerant “organiser” (which is not, very) because the book is not a reassessment of any sort but a contribution to the mythology of the movement. Fair enough; that’s what memoirs are for, I suppose. We shall just have to stick with Germaine Greer if we want a feminist who can see that abortion is anti-woman, never mind anti-human.