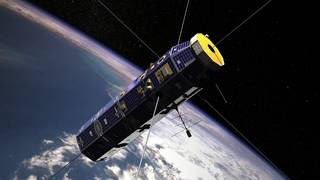 The ionosphere lies some 40 to 600 miles above Earth’s surface, where it interacts and co-mingles with the neutral particles of the tenuous upper atmosphere. The upper atmosphere and ionosphere change constantly in response to forces from above and below, including explosions on the sun, intense upper atmosphere winds and dynamic electric field changes.
Credits: NASA's Goddard Space Flight Center 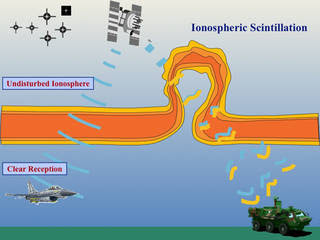 The U.S. Air Force Communication/Navigation Outage Forecasting System observed how changes in Earth's ionosphere cause what's known as scintillations, which interfere with radio wave navigation and communication systems, especially at low latitudes near the equator.
Credits: U.S. Air Force Research Laboratory
Scientists are learning more about how the upper atmosphere and ionosphere affect space satellites as well as communications and navigation here on Earth, thanks to new data from a U.S. Air Force satellite that recently completed a more than seven-year mission.
The Communication/Navigation Outage Forecasting System (C/NOFS) satellite burned up in Earth’s atmosphere during a planned reentry on Nov. 28, leaving behind a treasure trove of data about a part of the space environment that’s difficult to study. The unique set of sustained observations from C/NOFS will greatly improve models currently used to predict satellite trajectories, orbital drag and uncontrolled re-entry.
Scientists from the U.S. Air Force, NASA, and the University of Texas (UT) at Dallas are presenting the results at the American Geophysical Union Fall Meeting in San Francisco.
Launched on April 16, 2008, C/NOFS studied a region high above in our atmosphere called the ionosphere, a layer of electrically charged particles created by ultra-violet radiation from the sun. This layer lies some 40 to 600 miles above the Earth’s surface, where it interacts and co-mingles with the neutral particles of the tenuous upper atmosphere. The upper atmosphere and ionosphere change constantly in response to forces from above and below, including explosions on the sun, intense upper atmosphere winds, and dynamic electric field changes. In addition to interfering with satellite orbits, such changes can produce turbulence in the ionosphere that cause what's known as scintillations, which interfere with radio wave navigation and communication systems, especially at low latitudes near the equator.
During most of its lifetime, C/NOFS never came closer than about 250 miles above the ground. However, as solar activity increased, C/NOFS began to orbit at lower and lower altitudes—ultimately descending to less than 160 miles above Earth.
During its last 13 months of operations, as its orbit decayed and it spiraled into lower altitudes and eventual re-entry into Earth’s atmosphere, C/NOFS satellite captured a unique set of comprehensive observations as it traveled through the very space environment that can directly cause premature orbital decay. Such regions have rarely been studied directly for extended periods of time, because orbits in this denser region of the atmosphere are not sustainable long-term without on board propulsion.
"One thing we learned clearly from C/NOFS is just how hard it is to predict the precise time and location of re-entry," said Cassandra Fesen, principal investigator for C/NOFS at the Air Force Research Laboratory at the Kirtland Air Force Base in Albuquerque, New Mexico.
The C/NOFS data at these lower altitudes show that the upper atmosphere and ionosphere react strongly to even small changes in near-Earth space, said Rod Heelis, principal investigator at the UT-Dallas for NASA's Coupled Ion-Neutral Dynamics Investigation (CINDI) instrument suite on board the satellite.
"The neutral atmosphere responds very dramatically to quite small energy inputs," said Heelis. "Even though the energy is put in at high latitudes – closer to the poles – the reaction at lower latitudes, near the equator, is significant."
Heelis also described research on a previously-hard-to-view sweet spot in the atmosphere, where the charged particles of the ionosphere and the neutral particles of the atmosphere directly affect each other. The CINDI observations show that the neutral wind creates piles of neutral gas pushed up against ionospheric density variations – similar to how blowing snow piles up in drifts against a building wall. This results in density striations in the atmosphere that were never previously observed. Such density variations are necessary data to include when modeling interference with radio waves or excess drag on a travelling spacecraft.
Rob Pfaff, project scientist for CINDI at NASA's Goddard Space Flight Center in Greenbelt, Maryland, and principal investigator for another C/NOFS instrument, the Vector Electric Field Investigation, is studying observations that speak to one of the original goals of the C/NOFS program: Why does the low latitude ionosphere at night become so turbulent that it can wreak havoc on communications and navigation radio signals?
Developing the capability to predict such space weather disturbances has been a long-standing goal of the Air Force Research Laboratory. The C/NOFS low altitude observations were critical to form a complete picture of these disturbances, as the satellite ventured to the possible root of the largest ionospheric upheavals -- those that emanate from the bottom ledge of the ionosphere at night. The observations revealed the presence of strong shears in the horizontal ionosphere motions at the base of the ionosphere, places where charged particles flow by each other in opposite directions. C/NOFS observed shears and undulations along this boundary. Such shears and undulations -- spotted throughout the nighttime, equatorial ionosphere -- are believed to be the source of large-scale instabilities that ultimately drive the detrimental scintillations.
For more information about C/NOFS, visit:
http://nssdc.gsfc.nasa.gov/nmc/spacecraftDisplay.do?id=2008-017A
Karen C. FoxNASA's Goddard Space Flight Center, Greenbelt, Md.karen.c.fox@nasa.gov301-286-6284
Susan HendrixNASA's Goddard Space Flight Center, Greenbelt, Md.susan.m.hendrix@nasa.gov301-286-7745
Editor: Rob Garner
Publicado por salud equitativa en 3:35