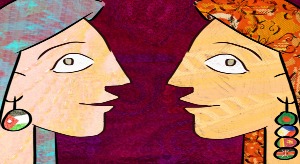 “She is  not a slave, she is a human with rights and dignity.
You should protect her and respect her”.

-Mrs. Mahasen, Jordanian  Journalist during an interview with Adaleh Center  1
Though Jordan is acknowledged for being the first country in the MENA region to improve legal protections for domestic workers, it is undeniable that migrant domestic workers here still face various forms of abuse.2 These include not having a day off per week, not paying wages or not paying wages on time, and confiscating passports.3
We join Adaleh Center for Human Rights Studies in applauding the actions of people like Ms. Mahasen El Imam who for 20 years has been dedicated to ensuring an employment relationship with domestic workers based on dignity and respect. She makes it a point, among other things, to pay wages on time, provide a day off each week, and not withhold her passport.
Be a role model in ensuring your employment relationship is based on respect and rights. And if you don’t employ domestic workers, join us in creating a culture based on respecting domestic workers in Jordan.
Jordanians are known for their hospitality and friendliness towards visitors – we’re sure you’ll agree that this attitude should also extend to domestic workers, who deserve respect for what they do.
To ensure their rights are protected, domestic workers must be able to:
1. Have a day off each week — as it is necessary for domestic workers to rest and rejuvenate both physically and psychologically.
2. Be paid on time — as this is the money she depends on to secure her family’s livelihood back home.
3. Hold on to their own passport — as it validates her identity and legal status.
Not only are these her human rights, but they are also her labour rights which are protected under the Jordanian law.4
Sign the pledge now to commit to respecting the rights of present and future domestic workers.
In partnership with

Adaleh Center for Human Rights is a non-governmental, non-profit organization founded in September 2003, with a mission of enforcing human rights in Jordan and Arab world, through capacity building of civil society and practitioners working in the field of human rights, democracy and justice. The Center works in accordance with all universal human rights declarations, principles and charters issued by the United Nations.
Publicado por salud equitativa en 5:12