With its enormous green and purple leaves, the South American miconia tree is invading botanic gardens all around the world on account of its beauty. This plant, however, is called the ‘green cancer’ for its ability to infest new territories. A new study that has identified 91 countries which are at risk for being colonised by this plant warns that the plant's expansion in infested areas will not be negatively affected by a rise in temperatures. 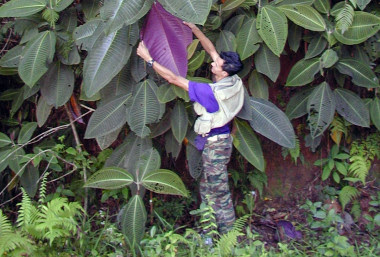 Miconia plant in the Mont Marau in Tahiti (French Polynesia), where it is currently considered the worst plant plague in the history. / Eloise Killgore


Native to the rainforest stretching from southern Mexico to northern Argentina, the miconia (Miconia calvescens) tree is one of the world's 100 most invasive species according to the International Union for Conservation of Nature (IUCN). Moreover, it is called the ‘green cancer’ due to the negative effects it has on the environment as well as its invasive characteristics: rapid growth, short generation time, its ability to both reproduce alone and vegetative propagation, and profuse production of seeds which are easily spread.
"It is extremely difficult to eradicate the miconia tree once it has invaded a new territory,” indicates Noelia González-Muñoz
Its unique beauty –large green leaves presenting white veining and a purple underside– is the reason why this plant has been introduced in public and private gardens as an ornamental plant. Nonetheless, this ‘velvet tree’ -as it is also known- has broken free from these gardens to invade hectares of tropical forests.
“This plant colonises the entire surface area of the territories it invades, forming monospecific stands that prevent sunlight from reaching the stratum below them. As a result of this plant's presence, between 40 and 50 of the plants native to Tahiti have disappeared. It is extremely difficult to eradicate the miconia tree once it has invaded a new territory,” indicates Noelia González-Muñoz to SINC, a researcher at the University of Alcalá (Spain), adding that its roots and all parts of the root system must be completely eliminated from the soil in order to exterminate the plant given its great ability to grow back.
This is currently considered the worst plant plague in the history of Hawaii and French Polynesia. Sri Lanka, New Caledonia and the rainforests of Queensland (Australia) can also be added to this list of plagued areas. In order to predict future invasions of the miconia tree, a new study published in 'Biological Invasions' has identified 91 countries, 400 islands and 364 protected areas that fall outside the native range of this plant but are considered susceptible to being overrun by it.
By 2080 the native area infested by this plant will be cut in half as a result of global warming, but not the at-risk territories
Furthermore, the study indicates that 7.2% of the Earth's land area presents conditions that are favourable to the presence of the miconia tree, and “50% of this territory lies outside of the plant's native area,” notes González-Muñoz, the main author of the study.
A list of botanic gardens that house the miconia tree
Nevertheless, the area that is at risk for being infested by this plant will be cut in half by 2080 as a result of global warming. This reduction will particularly occur in areas that are native to the plant rather than in at-risk territories. “The results thus predict an interesting two-fold negative impact on the potential world-wide distribution of the miconia plant resulting from global warming since a decrease in potentially affected areas in overrun territories would be minimum,” says González-Muñoz.
To prevent the plant from spreading, the study includes a detailed list of countries and islands that present potentially favourable regions for this species. However, seeing as cases of invasion have stemmed from the plant's presence in public and private botanic gardens, the team has also included a list of these gardens. “This way, the information that we are providing can serve as a warning so that possible cases of the plant's escape from gardens can be detected in a timely manner,” concludes the expert.

This plant is not a threat to Spain

Although scientists are unsure of the exact facts, it is highly likely that the miconia plant forms part of botanic garden collections that include tropical plants. However, according to the study and the results “Miconia calvescens is not a potential threat to Spain,” affirms Noelia González-Muñoz.
To successfully propagate on the Iberian Peninsula the plant would need temperature and humidity conditions that are very different from the ones Spain has. “Our model shows that the majority of the area potentially affected by miconia is located in the tropical forests of the southern hemisphere,” stresses the researcher.
Reference:
González-Muñoz, Noelia; Bellard, Celine; Leclerc, Camille; Meyer, Jean-Yves; Courchamp, Franck. "Assessing current and future risks of invasion by the "green cancer" Miconia calvescens” Biological Invasions 17(11): 3337-3350 DOI: 10.1007/s10530-015-0960-x november 2015
Publicado por salud equitativa en 5:45