THE OTHER SIDE OF FEMINISM: VIOLENCE ▼ MercatorNet: The Hunger Games herald the ultimate feminist dream 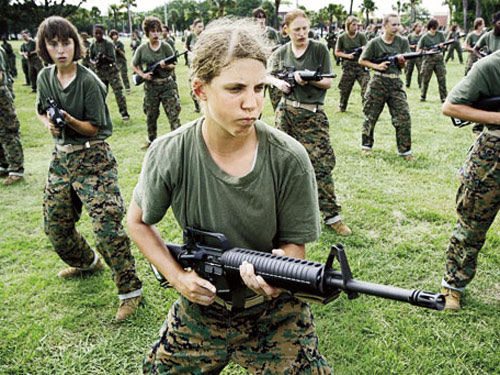 For anyone who hadn’t noticed  the last of The Hunger Games films, Mockingjay 2, opened in our cinemas last Friday to a huge fanfare. But despite all the hype this, the most violent of the series, had the lowest box office opening, a third down on the $150 million plus of the previous two.

Though small comfort, this is definitely some relief.

Maybe the real life violence – the young people massacred at the Bataclan – on the same night made its make-believe distinctly unappetising.

Maybe also the largely young girl audience (55 – 65 per cent) that The Hunger Games has targeted and attracted have begun to be less enamoured of the female action hero fantasy? I sincerely hope so.

This is the trend that Hollywood producers have been exploiting  for five to ten years now – women’s desire to see women ‘dominating’. A female James Bond is only a matter of time in today’s feminised and conforming world.

It has proved lucrative with its feminist strong women like Jennifer Lawrence taking centre stage to demand gender pay parity at one and the same time, acting out the fiction that women are the same as men in every respect.

But of the hundreds of actresses to have played out this fiction – from Uma Thurman to Angelina Jolie to Keira Knightley – would any pass fitness and strength tests for their respective armies or special forces?

The truthful answer is none. This is fantasy pure and simple.

It wouldn’t matter if it wasn’t being translated into reality. But it is. Over a similar period pressure from women for women to have frontline combat roles in the armed forces has mounted.

Police and armed forces across Britain have fallen prey to their gender parity demands. The proportion of female police officers in the UK at the current rate of recruitment will reach a third in a couple of years.

They are not just in backroom roles either.

Ten per cent of our armed forces in the UK are now women and in the officer corps this number rises to nearly 13 per cent. This year saw our first female General appointed – naturally this was hailed as a feminist and human rights victory. The Guardian gleefully reported that “the role has taken on added significance in light of court rulings enforcing human rights legislation in the armed forces, and a growing number of complaints about the conduct of service personnel, including sexism”.

Why the need? Is their recruitment aimed at improving our military effectiveness or our security? Or is it to capitulate to feminist demands?

Michael Fallon – the last person I would expect to succumb to such pressure did after he took over at the MoD. In December 2014, he announced that the way would be paved for women to be put into combat roles, with the proviso that selection would be made on ability rather than gender.

Good luck with that. The outcry over parity in fitness tests for female police does not bode well, nor the fact that women were twice as likely to fail. Guess what? The fitness tests discriminated against women, claimed the gender lobby. Of course.

I wonder whether the Secretary of State is regretting his hasty decision, which could end up putting women against the butchers of the so-called Islamic State, which patently has no regard for the Geneva Convention and makes the Nazis look like pussycats by comparison.

The Hollywood action woman/robocop myth has done its damage. Against all the evidence of clear differences in strength, attitude and reflex, women must be considered as men’s equals in warfare. I am only waiting for the extra billions that the Prime Minister has promised to invest in the SAS to be portioned out on strict LGBT and disability quotas.

The fact that one woman can survive a gruelling ordeal does not prove anything. Dr Miller is the UK’s fastest woman obstacle racer, which involves a 20-mile course crawling under barbed wire, wading through cold water and scaling 8ft walls. She thinks the SAS should be opened up to women, but even she has had to admit that when it comes to strength “the guys have an edge”.

I agree with Ray Care, one of the commandos who trained 55 kilo Dr Miller. He was politically incorrect and brave enough to say: “There are certain things a woman should do. Going through Navy Seal training is not one of them. I’ve told women before: stay in your lane”.

For good measure, he added, that from a training standpoint, “men have to change and get naked in front of each other. Financially, it would make no sense because everything would have to be segregated.”

As well as superior strength, men on average have faster reaction times, which if not up to scratch, make you a danger to both yourself and your colleagues around you.

At the MoD, however, they seem to have been watching The Hunger Games. They are reviewing rules that ban women soldiers in the infantry and armoured corps from bearing arms, which could pave the way for women to join the SAS.

I wonder which they believe in the face of real war is the more important – gender parity or the country’s security?

Kathy Gyngell is Co-Editor of The Conservative Woman, where this article was first published. It is reproduced here with permission.
- See more at: http://www.mercatornet.com/articles/view/the-hunger-games-herald-the-ultimate-feminist-dream/17262#sthash.ofkkJ4kd.dpuf

The time is approaching for MercatorNet's annual "dignitarian of the year" award. Last year, there were five nominees and the winner was Mark Regnerus, a sociologist who had published a study of the welfare of children of same-sex couples -- and suffered immensely as a result.
Is there anyone whom you would like to nominate? We want to highlight the pressing need for people who defend human dignity with conviction, courage and compassion. Later in the month we will publish a short list of five and then the winner. We'd really appreciate your input.