A class of widely used chemical coolants known as hydrofluorocarbons (HFC) contributes to ozone depletion by a small but measurable amount, countering a decades-old assumption, according to a new NASA study.
The paper, published Oct. 22 in Geophysical Research Letters, a journal of the American Geophysical Union, is based on the results of a NASA-derived atmospheric chemistry climate model that projected the impacts of HFC gases on the atmosphere by the year 2050.

This narrated video provides an overview of the study findings and features NASA scientist Margaret Hurwitz.
Credits: NASA's Goddard Space Flight Center
Download this video in HD formats from NASA Goddard's Scientific Visualization Studio
The ozone layer comprises a belt of ozone molecules located primarily in the lower stratosphere. It is responsible for absorbing most of the sun’s harmful ultraviolet radiation before it reaches Earth’s surface. Research in the 1990s showed that HFCs, which have replaced more powerful ozone-depleting chemical coolants in recent years, destroy a negligible amount of ozone. But that conclusion was reached by examining only the gases’ ability to break down ozone molecules through chemical reactions that take place following the breakdown of these molecules in the atmosphere.
The new study, which focused on the five types of HFCs expected to contribute the most to global warming in 2050, found that the gases indirectly contribute to ozone depletion. HFC emissions cause increased warming of the stratosphere, speeding up the chemical reactions that destroy ozone molecules, and they also decrease ozone levels in the tropics by accelerating the upward movement of ozone-poor air.  According to the model, their impact is such that HFCs will cause a 0.035 percent decrease in ozone by 2050. 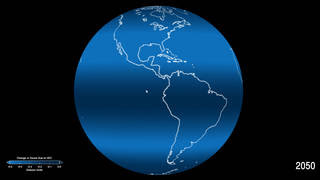 A global representation of the projected impacts of hydrofluorocarbons (HFC) on ozone levels at the various latitudes in 2050. The small but measurable amount of ozone loss is quantified in Dobson units, the most common unit for measuring ozone concentration. Over Earth’s surface, the ozone layer’s average thickness is about 300 Dobson units, or three millimeters.
Credits: NASA's Goddard Space Flight Center
HFCs’ contribution to ozone depletion is small compared to its predecessors. For example, trichlorofluoromethane, or CFC-11, a once common coolant that is no longer used, causes about 400 times more ozone depletion per unit mass than HFCs.
“We’re not suggesting HFCs are an existential threat to the ozone layer or to ozone hole recovery, but the impact isn’t zero as has been claimed,” said lead author Margaret Hurwitz, an atmospheric scientist at NASA's Goddard Space Flight Center in Greenbelt, Maryland. “HFCs are, in fact, weak ozone-depleting substances.”
In the study, scientists also found that HFCs have a nearly linear impact on stratospheric temperature and ozone change. For example, reducing HFC emissions by 50 percent would decrease the ozone change by a comparable amount. Such a direct relationship will prove useful for evaluating the impacts of emerging HFCs, Hurwitz said. “We can provide policy makers with an estimate of the stratospheric impacts of new HFC gases.”
HFCs have been adopted as replacements for chlorofluorocarbons (CFC) and hydrochlorofluorocarbons (HCFC) in refrigerators and in home and automobile air conditioners. CFCs were largely responsible for the ozone depletion first observed by scientists in the 1980s, most notably the ozone hole above Antarctica, which continues today. CFC molecules contain chlorine atoms, and each atom can destroy thousands of ozone molecules. Under the auspices of the Montreal Protocol treaty signed in 1987, CFCs were officially phased out of production worldwide in 2010.
While HCFCs contain chlorine atoms, they are less damaging to the ozone layer because they also contain hydrogen atoms, which causes them to break down in the atmosphere faster.  HCFCs are currently being phased out in favor of HFCs, which do not contain chlorine.
The study adds nuance to the discussion around HFCs and their full impact on the ozone, according to David Fahey, a research physicist and director of the National Oceanic and Atmospheric Administration’s Earth Systems Research Laboratory, who was not involved in the study.
“What the paper demonstrates is that when you put this much of an infrared radiation-absorbing material in the stratosphere, even though it nominally does not destroy ozone in the same way that mainline ODSs [ozone-depleting substances] do, it’s going to make a difference—it’s going to start changing things,” Fahey said. “It adds a new dimension of thinking that stratospheric scientists need to be aware of as they discuss these matters with policy makers.”
While HFCs are only weak ozone-depleting substances, they are, like CFCs and HCFCs, strong greenhouse gases. If production trends continue, projections show that, by 2050, the amount of global warming by all HFCs could be as large as 20 percent that of carbon dioxide.
Work is also underway to analyze the HFC impacts on surface climate. “We’ve taken a major step towards understanding the effect of HFCs on the stratosphere and the ozone layer,” said Paul Newman, a co-author on the paper and chief scientist for Earth sciences at Goddard. “Our next step is to use a more complex type of model so we can begin to look at the impact of these compounds on land and ocean temperature, rainfall and sea ice.”
Related Link
Samson Reiny
NASA's Goddard Space Flight Center, Greenbelt, Md.
samson.k.reiny@nasa.gov
301-286-3854
Editor: Rob Garner 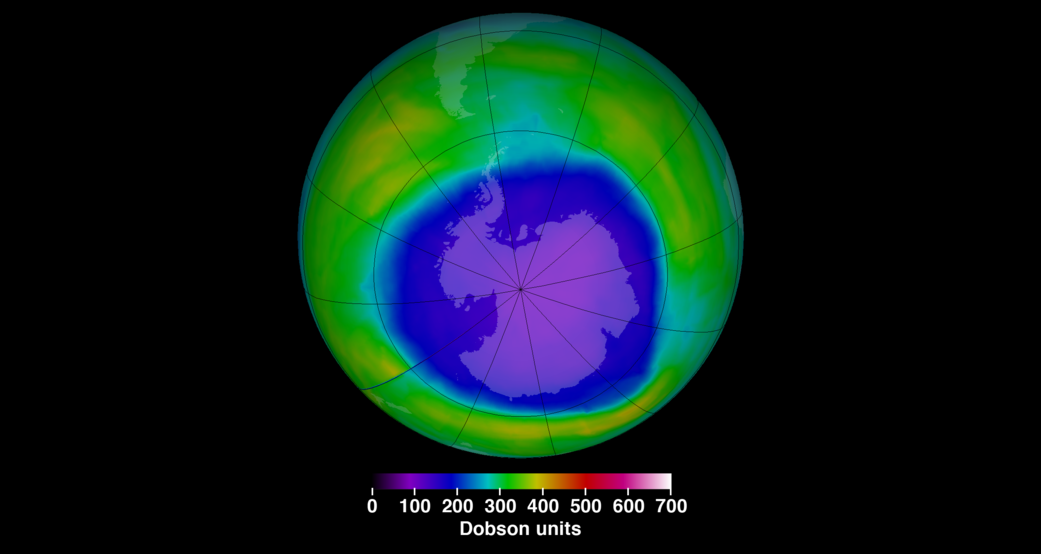 The Antarctic ozone hole, which typically reaches its annual peak area between mid-September and early October, formed more slowly this year but quickly expanded to cover a larger area of low ozone values than the past few years, according to NASA and National Oceanic and Atmospheric Administration (NOAA) scientists. While the current ozone hole area is large, this area is consistent with scientists’ understanding of ozone depletion chemistry and the colder than average 2015 stratospheric weather conditions, which contribute to ozone depletion.
The Antarctic ozone hole, located above the South Pole, expands during every Southern Hemisphere Antarctic spring. Additional information will be forthcoming about this year’s ozone hole in late October. Dobson units are a measurement of the concentration of atmospheric ozone.
Image credit: NASA's Goddard Space Flight Center
Related Links
Audrey HaarNASA's Goddard Space Flight Center, Greenbelt, Md.Audrey.J.Haar@nasa.gov240-684-0808
Monica AllenNOAA Office of Oceanic & Atmospheric Researchmonica.allen@noaa.gov301-734-1123
Editor: Rob Garner