The trade spat between the top two economies of the world began last month with Trump imposing tariffs on steel and aluminum imports into US. 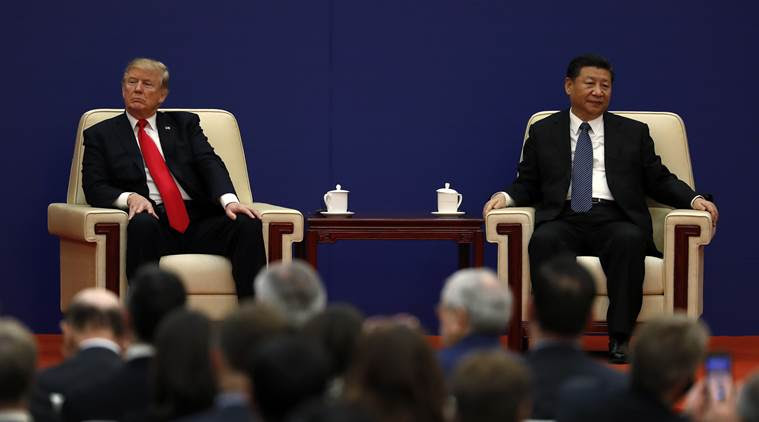 China must address its failure to protect US intellectual property, but these tariffs are not an effective response because it will harm American jobs and consumers, said Erik Paulsen, Joint Economic Committee Chairman Congressman. (AP Photo)
The Trump administration’s move to impose a hefty 25 per cent tariff on the USD 50 billion worth of Chinese goods and tighten its noose against China’s alleged theft of US’ intellectual property rights will have an adverse impact on American consumers, industry leaders and lawmakers have warned. The White house said yesterday that the US’ will impose a 25 per cent tariff on USD 50 billion of goods imported from China containing industrially significant technology, including those related to the ‘Made in China 2025’ programme.
“The US Chamber supports the administration’s ongoing efforts to deal with China’s unfair trade practices and policies. However, we continue to believe that the use of tariffs puts all the burden on American companies and consumers,” US Chamber of Commerce president and CEO Thomas J Donohue said yesterday. “The administration’s decision to impose tariffs on USD 50 billion worth of Chinese products is in fact a tax on American consumers and will undermine the competitiveness of American companies, just as the administration’s steel tariffs have dramatically raised prices on steel in the US,” he said.
China must address its failure to protect US intellectual property, but these tariffs are not an effective response because it will harm American jobs and consumers, said Erik Paulsen, Joint Economic Committee Chairman Congressman. “Our economy is seeing measurable gains thanks to pro-growth policies like the Tax Cuts & Jobs Act. GDP has grown an average of 2.5 per cent over the past five quarters, unemployment is at its lowest rate since December of 2000, and everywhere we are hearing positive stories from businesses large and small. Placing tariffs on medical devices and consumer electronics threaten these gains,” Paulsen said.
President Donald Trump campaigned on a promise to confront China’s unfair trade practices, but his continued chaotic trade brinkmanship threatens to invite retaliation that harms American workers and farmers and the American economy, Congresswoman Nancy Pelosi alleged. “Last week, the President revealed the utter hollowness of his promises by pledging the American government resources to a Chinese company that has violated US sanctions by selling technology to North Korea and Iran, and that is a known cyber security risk to the United States,” she said.
Pelosi said strong, smart and strategic action not reckless and rash floundering was needed to confront China’s brazen trade cheating. “Beijing’s regulatory barriers, localisation requirements, labor abuses, theft of trade secrets and counterfeiting of designs, anti-competitive ‘Made in China 2025′ policy and many other unfair trade practices threaten America’s ability to compete both in China and with China around the world,” Pelosi said.
Senate Minority Leader Chuck Schumer said Trump had the potential to do more to correct China’s “unfair” trade policies than any president has had but he must be strong, tough and consistent. “While obviously more details are needed, this outline represents the kind of actions we have needed to take for a long time, but the president must stick with it and not bargain it away,” Schumer said.
Having already undermined US national security interests by agreeing to China’s precondition to trade talks by easing penalties on ZTE, the administration now appears to be saving face by rattling its saber with new deadlines on investment restrictions and tariffs on China, said Ways & Means Committee Ranking Member Richard Neal. “In the meantime, the Made in China 2025 initiative continues full speed ahead. Without a coherent strategy, it’s hard to see the renewed commitment to threatening tariffs and investment restrictions as anything but more bluster and chaos,” Neal said.
Congressman Matt Gaetz commended Trump for taking action against China’s ruthless and unfair trade practices, as well as its state-sponsored theft of American innovators’ intellectual property (IP). “For too many years, China has pursued trade practices and business policies that make it impossible for foreign companies to compete on a level playing field with Chinese companies. These policies, like its ‘Made in China 2025 policy’ hurt American companies and limit economic growth worldwide,” he said.
Noting that IP theft costs the US economy over USD 225 billion a year, he said the greatest perpetrator is China. “As a member of the Subcommittee on Intellectual Property, I applaud the bold steps President Trump is taking to address this troubling issue. China is one of America’s largest trading partners; their predatory behaviour is unacceptable,” he said.
Noting that China is engaging in a systematic and multifaceted strategy to steal intellectual property, Gaetz alleged that beyond the economic costs, this theft presented significant concerns for national security. “The majority of Chinese companies that steal or benefit from stolen intellectual property are state-owned. The Chinese government is known for using their military’s cyber capabilities to hack into private US tech firms, stealing IP, then transferring the technology to state-run companies who profit from its development,” he said. The trade spat between the top two economies of the world began last month with Trump imposing tariffs on steel and aluminum imports into US.
For all the latest World News, download Indian Express App
Publicado por salud equitativa en 4:56