Before and after four years | The Indian Express

Before and after four years | The Indian Express 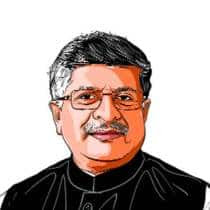 
Before and after four years

Policy paralysis of the UPA years has been replaced with inclusive growth, successful programme implementation, stress on equity. The legacy of the UPA was one of gross economic mismanagement. (Illustration: Mithun Chakraborty)

Four years of the NDA government led by Prime Minister Narendra Modi have transformed India from a country of despair to hope, policy paralysis to purposeful policy activism and widespread corruption to clean government. It has, above all, created the image of India as an emerging global power led by a dignified global leader, whose views carry weight in global affairs.
This, in many ways, is in tune with the expectations of the people of India who gave a clear majority to the BJP— the first time in 30 years that a single party got such a majority. The mandate in 2014 was for change. The people reposed trust in PM Modi to salvage the country’s reputation, and take it on a path of development and good governance.
Let us examine the rising international profile of India in the last four years. Be it the Chinese president or the newly re-elected Russian president, there are new contours of personal diplomacy emerging by way of informal summits. This culminated in the historic example of the Russian president seeing off a world leader at the airport for the first time. The PM was accorded civilian honours in Afghanistan, UAE, Saudi Arabia, Oman and Iran. The King of Jordan came to India with an important message against terrorism. The PM, for the first time, went on a visit to Israel, as well as to Palestine. Ten ASEAN leaders came together in New Delhi on January 26 to express solidarity with India. These countries have made common cause with India on the issue of combating global terrorism. The government has also given a new confidence to the security forces in pursuit of India’s security interests.
Related News

The legacy of the UPA was one of gross economic mismanagement. Four years later, the fundamentals of the Indian economy have become stronger with the highest ever FDI inflows, highest ever Forex reserves and sound governance. All this has led to international bodies like the IMF, World Bank and other top think tanks confirming that India is the fastest-growing large economy and that the rate of GDP growth would touch 7.5 per cent next year.
Our credo has been to transform the economy through reforms. The roll-out of GST, backed by a consensus among all stakeholders, the cleaning up of the realty sector through RERA and the implementation of the Insolvency and Bankruptcy Code, to resolve the issue of bank NPAs, are proving to be game-changers.
We had set a Rs 72,500 crore disinvestment target for 2017-18, which has already been exceeded — we have achieved a disinvestment of Rs 1 lakh crore. Other fundamentals such as fiscal deficit and inflation have remained under control, reflecting the robust health of our economy. These measures propelled India’s jump of 30 notches into the top 100 on the World Bank’s Ease of Doing Business index.
The last four years have seen inclusive growth with a stress on equity and rights of the poor. The construction of 7.5 crore toilets in mission mode, making available 3.5 crore Ujjwala LPG gas connections, disbursement of loans amounting to Rs 5.67 lakh crore under the MUDRA scheme to 12.33 crore people, a substantial number of whom are from SC/ST and minority communities, have been revolutionary steps in the empowerment of the poor. The globally-acclaimed JAM trinity (31 crore Jan Dhan bank accounts, 121 crore mobile phones and 120 crore Aadhaar IDs) has resulted in the direct transfer of welfare benefits to the accounts of the poor, saving over Rs 90,000 crore of public money that used to be pocketed by middlemen and fictitious claimants. The late Rajiv Gandhi once famously said that only 15 paise of every rupee sent from Delhi reaches the villages. Under our government, Rs 1,000 sent from Delhi directly reaches the accounts of the poor in the villages.
Programmes like Digital India, Make in India, Skill India, Start-up India and Stand-up India are leveraging the power of technology to empower and give a better life to ordinary Indians. Digital India has become a mass movement where 2.9 lakh common service centres (CSCs, up from 83,000 in 2014), spread across about 2 lakh gram panchayats, are providing digital delivery of over 200 services, ranging from banking to insurance to land records to Bharat bill pay and are creating new entrepreneurs and opportunities. They are also engaged in spreading digital literacy and the provision of affordable sanitary napkins in rural areas. Ten lakh people work at these CSCs and among the village-level entrepreneurs who operate them, 52,000 are women. With government support, 89 BPOs in small towns in 27 states and UTs have become operational, including in Patna, Imphal, Kohima, Guwahati, Srinagar and Bhadarwah. Indigenously developed, low-cost technological solutions like eHospital, eScholarship, soil health cards and Jeevan Praman are bringing high-quality digital services to the doorsteps of the citizens. In electronics manufacturing, new milestones are being created where from a mere two factories in 2014, 120 mobile handset and accessories manufacturing units representing almost all global brands are now functional in India. These alone have added some 4.5 lakh jobs.
In agriculture, too, from crop insurance to irrigation to new schemes for milk and the blue revolution to better market access, typified by solutions like eNAM, that links 78.8 lakh registered farmers to 585 agri-mandis in 14 states, are bringing better prospects and empowerment to the farmers. The successful implementation of schemes like neem-coated urea has resolved the issue of fertiliser supply. The focus on minor-irrigation, credit facilities for farmers and rural infrastructure under schemes like the Pradhan Mantri Krishi Sampada Yojna is creating an ecosystem to empower the farmers. The Ayushman Bharat National Health Protection Scheme (NHPS) is providing health insurance up to Rs 5 lakh per family for serious illnesses and will cover 10 crore families from the economically weaker sections of society.
The great speed with which physical infrastructure is being created and pending projects completed, be it national highways or rural roads, or bringing electricity to unelectrified villages — a task that has been completed for all villages in India in record time — is creating a new paradigm for the benefit of the common people. The new aviation policy has created a situation where an Indian in Hawaii chappals can fly in a hawaijahaj. These are all defining achievements of our government.
The abiding power of “sabka saath, sabka vikas” is reflected in all our activities. It shall continue to be the theme of our government — without discrimination. Four years have been a journey of hope and development and the same shall be our pursuit as we seek to bring smiles on the faces of common Indians and make India a country
of aspiration.
The writer is Union minister for Electronics & Information Technology and Law and Justice.
For all the latest Opinion News, download Indian Express App
More From Ravi Shankar Prasad