TIME TO SAY GOODBYE ▼ Borough Market attacks: London victim’s friend: “The last time I saw him, he was on the ground holding his skateboard” | In English | EL PAÍS

Borough Market attacks: London victim’s friend: “The last time I saw him, he was on the ground holding his skateboard” | In English | EL PAÍS

London victim’s friend: “The last time I saw him, he was on the ground holding his skateboard”

Friend of Ignacio Echeverría, who faced up to the terrorists, retells events that led to his death

VIRGINIA MARTÍNEZ CRESPO
Madrid 8 JUN 2017 - 05:14 ART
Guillermo Sánchez met Ignacio Echeverría – a Spanish man who faced up to the London attackers and whose death was confirmed on Wednesday – at one of the city’s skateparks at the beginning of the last academic year. They shared a love of skating, and would meet regularly to practice. 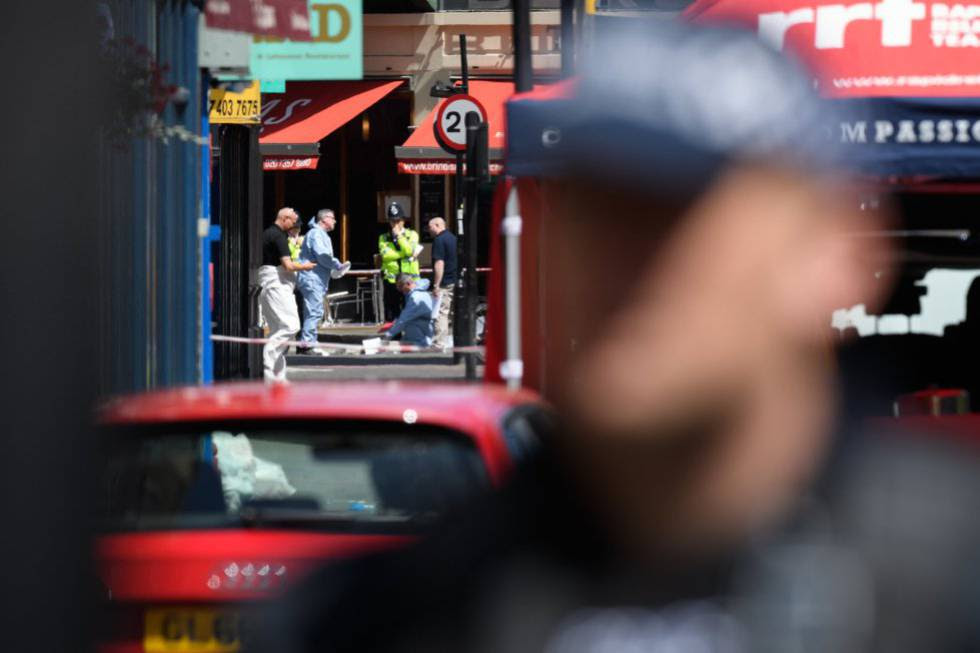 
On the afternoon of the London attack, they met near the Tate Modern art gallery, around two and a half kilometers from Borough Market – where they ran into the terrorists. Sánchez, a 25-year-old student, has shared his memories of Echevarría’s last moments in a telephone conversation with EL PAÍS.
Sánchez showed up a bit late for practice, and without his skateboard, because he was not feeling well. At that point, Ignacio and a third Spanish friend, Javier, had already been there for a while, capturing some of their skating tricks on video.

I’m staring at her, and suddenly I see Ignacio there as well, and he’s hitting them with his skateboard

GUILLERMO SÁNCHEZ, FRIEND
They started to feel hungry, and Sánchez suggested a restaurant in the Whitechapel area. After taking bikes from a public bicycle rental station, they went on their way. But upon arriving in Borough Market, the three friends saw a man who was stumbling and looked “like he was drunk.” This made them stop in their tracks.
Sánchez recalls that they stopped in a single line, with Echeverría in the lead, followed by himself and Javier, each one on his rental bike. At that point, they saw what looked like a street brawl. A policeman came running to the scene, only to collapse to the ground instants later.
Next to him, a woman was being apparently punched, although Sánchez now realizes that she was in fact being stabbed. “I’m staring at her, and suddenly I see Ignacio there as well, and he’s hitting them with his skateboard,” he recalls. “Then he fell to the ground, I don’t know why, whether he slipped or what, but he fell.”
After a few “microseconds,” Sánchez approached his friend, who was lying face up, and witnessed one of the attackers stab him in the side. Sánchez did not hear any gunshots. “I did not see him getting stabbed any more.”
One of the terrorists turned to Sánchez and screamed something he did not understand. He was about a meter and a half away; Javier was lagging behind. The other attackers were standing together, near Echevarría. Sánchez is not sure whether there were two or three of them.
“The last thing I remember is seeing Ignacio still conscious, lying on the ground face up, grabbing his skateboard.”
Afraid that he would be next, Sánchez hurled one of the bicycles at them and ran off, as did Javier. It was the last time they were to see Echeverría.
At that point, Sánchez did not know whether what he had witnessed was a terrorist attack or something else. “They were carrying butcher’s knives,” he says. He and Javier kept running through the crowd, until they figured they should go back for their friend. But it was already too late. The police had cordoned off the area.
Afraid that he would be next, Sánchez hurled one of the bicycles at the terrorists and ran off
The two were taken to a bar by police officers, where they stood around for a few minutes together with other passersby. Sánchez thought the police did not understand the situation and tried to tell them what he had seen. “I know who they are. I was there. I know what’s going on,” he says that he screamed at them.
They were still inside the bar when they heard a few shots. The police then let them out, and told them to run. Still together and in a state of shock, Sánchez and Javier began phoning the Spanish embassy and the emergency numbers to try to locate their friend. But they agreed not to call his family yet in order not to cause them “unnecessary alarm.”
The next morning, when there was still no news of Echevarría, they decided to contact his relatives. They found one of his sisters on Facebook and explained what had happened. As of Wednesday morning, Echeverría was being officially described only as missing, and Spanish authorities had been in touch with British counterparts to ask for a speedy identification of the bodies.
Later on Wednesday, however, one of Echeverría’s sisters announced on Facebook that her brother has now been identified as one of the eight fatalities in the terrorist attack.
English version by Susana Urra.

Jihadist terrorism: Could there be a new attack on Spanish soil?