ACTIVE MEMORY ▼ 1930s Refugee crisis: When the world shut its doors to the Jews | In English | EL PAÍS

1930s Refugee crisis: When the world shut its doors to the Jews | In English | EL PAÍS

When the world shut its doors to the Jews

Madrid 19 JUN 2017 - 08:42 ART
In this year’s biopic of Stefan Zweig – the Austrian writer who found refuge in the United States – the author spends a lot of time anguishing about the fate of Jewish friends and colleagues trying to flee Nazi-controlled Europe. “There are no visas for the Jews anymore,” says Zweig at one point. 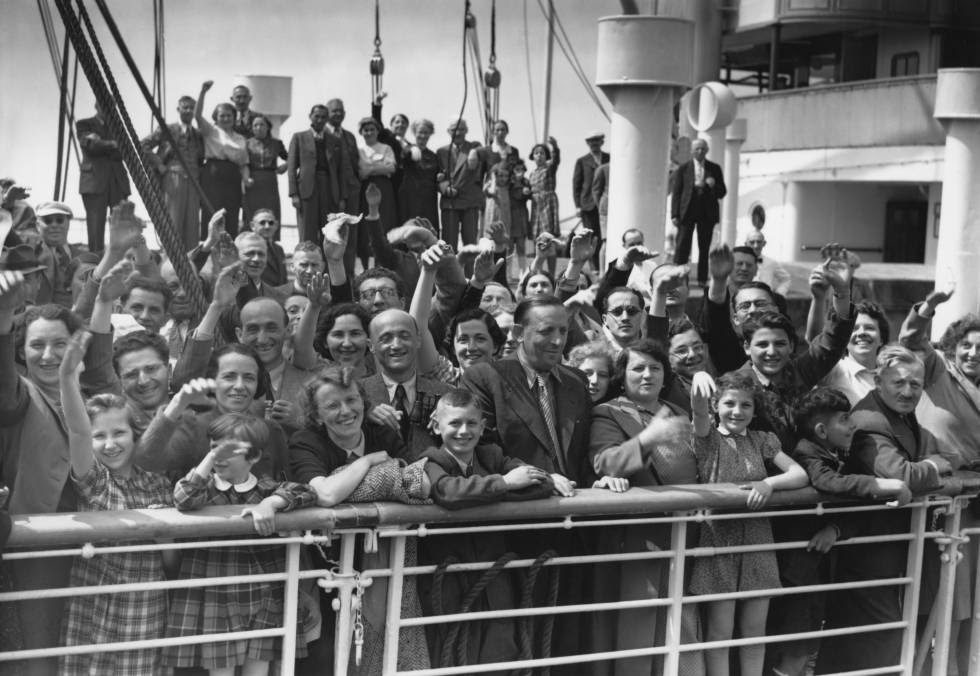 The St. Louis, with more than 700 Jews aboard, was denied entry in US and returned to Europe in 1939.KEYSTONE GETTY


The Allies’ decision to close their borders to Jews during World War II is still a sensitive subject, and new files held by the United Nations that have just been released by the London-based Wiener Library for the Study of the Holocaust and Genocide show that the United States, Russia, and Great Britain knew as early as December 1942 about Germany’s operations to liquidate European Jewry in the wake of the invasion of the Soviet Union in June 1941.
Arguments ISIS activists could infiltrate refugees fleeing war in Syria have been heard in recent years
Historian Paul R. Bartrop, director of the Center for Judaic, Holocaust and Genocide Studies at the University of Florida Gulf Coast, is working on a major study of the Allies’ response to the Final Solution, as the Nazi plan to murder all Jewish people is known. The project focuses on the Evián Conference in 1938, where delegates from 32 countries discussed the Jewish refugee problem and the plight of the increasing numbers of Jewish refugees fleeing persecution by Nazi Germany – a situation that has many parallels to the response to the war in Syria.
“Governments around the world faced a very similar crisis to the one that we are living through today,” says Bartrop, going on to cite questions posed at the time: “Should [those governments] open their doors to anybody with refugee status? Should they impose quotas, and if so, how to decide on how many to let in? Should refugees be let in regardless of the economic situation of the countries receiving them? Should they accept refugees with ethnic backgrounds and religions different from the majority of people in the country of destination? Then, as now, these were the questions being asked, and an urgent reply was required.”
Bartrop’s will be the first major study of the Evián Conference, which was called at the behest of the United States in the French spa town in July 1938. The Axis nations of Germany, Italy and Japan refused to attend, as did the Soviet Union. Even Poland and Romania only sent observers. Germany’s race laws were already prompting large numbers of Germany’s 600,000-strong Jewish community to leave.
The conference was a failure. Chaim Weizmann, who would become the first president of Israel, summed up the conference: “The world seems to be divided into two parts – those places where the Jews cannot live and those where they cannot enter.”
The St. Louis, a ship that left Hamburg for Cuba in May 1938 with 937 people aboard, most of them Jews, became a powerful symbol: it was refused permission to dock in Cuba, the United States and Canada and eventually returned to Europe. Most aboard went to countries later invaded by Germany, and some 278 were sent to death camps.
When war broke out in September 1939, it became even harder for refugees to find a haven. “With Europe at war, many countries felt they should close their borders to prevent fifth columnists infiltrating refugee groups,” says Bartop. Arguments that ISIS activists could infiltrate groups of refugees fleeing war in Syria have been heard in recent years.

The Allies’ efforts were focused on defeating the enemy, there was no room for anything else

The Spanish role in the French Resistance