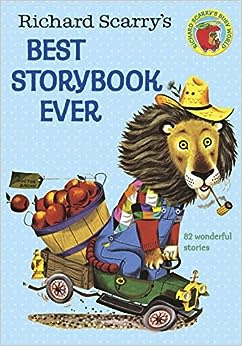 Every week my wife takes our two boys to the library. Thomas is old enough to pick a selection of books for himself – he often gets ones with diggers, or trains, or animals on the covers. Recently he has got a couple of books with dinosaurs on the front as he went on a pre-school trip to “Butterfly Creek” which has large dinosaur models which move and roar. (He was so taken with them that he was too scared to sleep when he got home...)  The latest crop of books include “Richard Scarry's Best Storybook Ever”. This has evoked a lot if nostalgia in me as I loved Scarry's “Busytown” books as a schoolboy.

Over the last few nights we have been dipping into this collection of stories and I would like to share one with you which I particularly appreciated. It is called “The Bunny Book” and is written by Scarry's wife, Partricia. In it a Daddy Bunny, Cousin Bunny, Aunt Bunny, Sister Bunny and Uncle Bunny ask themselves and each other what the Baby Bunny will be when he grows up and what he should be. The Daddy thinks he might be a mailman. The cousin hopes that he becomes a candy store owner. The Uncle wants him to be a train engineer. The sister thinks he should be an airplane pilot while his aunt muses that he could be a fireman. Through their questioning the baby bunny remains silent and “looks wise”. He doesn't want to be any of the proposed options when he grows up. The last page reads:


“[The baby bunny] bounced on his daddy's knee and laughed.
Can you guess what he will be?
He will have lots of little bunny children to feed when they are hungry. He will read them a story when they are sleepy, and tuck them into bed at night.
And that is what the baby bunny will grow up to be. A daddy rabbit.”
It almost brings a tear to my eye. A lovely affirmation of the attraction of parenthood. It is also a nice corrective to our notions of being and doing. While the baby bunny might do one of those other careers suggested by his family, he is planning to grow up to be a daddy. One wonders if such a book would be written now which appreciates so fully the importance of growing up to be a 'mummy' or a 'daddy'.  Unfortunately I still think Thomas wants to grow up to be a Tyrannosaurus Rex.
- See more at: http://www.mercatornet.com/demography/view/the-bunny-book/17682#sthash.bMnlniSb.dpuf
Publicado por salud equitativa en 1:53