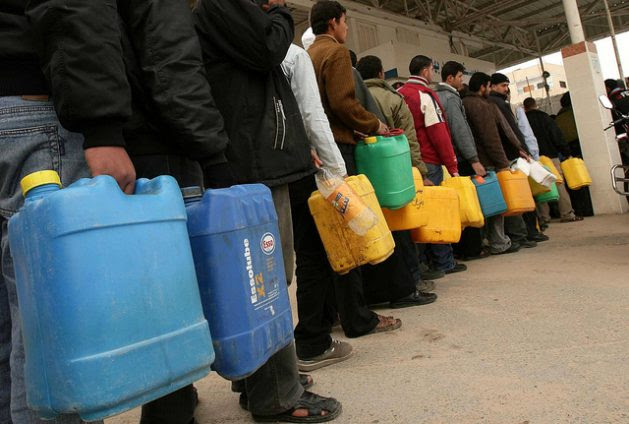 GAZA, Gaza City. Queuing in hope of fuel. Credit: Mohammed Omer / IPS
UNITED NATIONS, Feb 7 2018 (IPS) - UN agencies have sounded the alarm on the rapidly deteriorating humanitarian situation in Gaza, pointing to the devastating repercussions of the ongoing fuel shortages.
UN agencies have appealed for donor support as emergency fuel for critical facilities in Gaza are due to run out in 10 days.
In a meeting, UN Secretary General Antonio Guterres said that Gaza is a “constant humanitarian emergency.”
“Gaza remains squeezed by crippling closures…two million Palestinians are struggling everyday with crumbling infrastructure, an electricity crisis, a lack of basic services,” he said.
Fuel shortages are threatening Gaza’s hospitals and sanitation services that rely on backup generators to maintain operations.
If the energy supply is not replenished, at risk are emergency and diagnostic services such as x-rays, intensive care units, and operating theaters. Over 100 sewage pools, desalination plants, and solid waste collection capacity are also in jeopardy, said the Office for the Coordination of Humanitarian Affairs (OCHA).
“Hospitals have already begun to close. Without funding, more service providers will be forced to suspend operations over the coming weeks, and the situation will deteriorate dramatically, with potential impacts on the entire population,” said OCHA’s Humanitarian Coordinator for the Occupied Palestinian Territories Roberto Valent.
“We cannot allow this to happen,” he added.
So far, 16 hospitals and health centers have suspended operations.
Hospitals such as the al-Durra children’s hospital were forced to drastically reduce services due to the lack of fuel.
WHO said that Best Hanoun hospital only has its Emergency Department functioning at minimal capacity and estimates its reserve fuel will only last until mid-March.
In 2018, approximately 6.5 million dollars is required to provide 7.7 million liters of emer-gency fuel.
“This is the bare minimum needed to save off a collapse of services,” OCHA said in its ap-peal.
For the full functioning of basic facilities, 10 million dollars is needed per year.
Meanwhile, hospitals continue to face challenges in coping with the influx of trauma pa-tients.
According to WHO, 40 percent of the supply of essential drugs has been depleted, including drugs used in emergency departments and other critical units.
The UN Country Team in Palestine has predicted that Gaza will become unlivable by 2020 unless action is taken to improve basic services and infrastructure.
“Immediate donor support is urgent to ensure that vulnerable Palestinians in Gaza can access life-saving health, water, and sanitation services,” Valent said.
Gaza’s humanitarian crisis is occurring in the wake of the United States funding cuts to the UN Relief and Works Agency for Palestinian Refugees (UNRWA).
Approximately 65 million dollars has been withheld from the agency which serves over five million refugees with healthcare, social services, and emergency assistance in the Middle Eastern region.
Guterres expressed concern over the move, stating: “At stake is the human security, rights, and dignity of the five million Palestine refugees across the Middle East. But also at stake is the stability of the entire region which may be affected if UNRWA is unable to continue to provide vital services.”
Though it began in 2006, the energy crisis worsened in 2017 following a dispute between Palestinian authorities in Ramallah and Gaza over the funding and taxation of fuel and Israel’s subsequent move to reduce its electricity supply to the territories.