Although it is the world's largest military, the People's Liberation Army has been privately unhappy that it got less than double-digit funding increases the past two years. 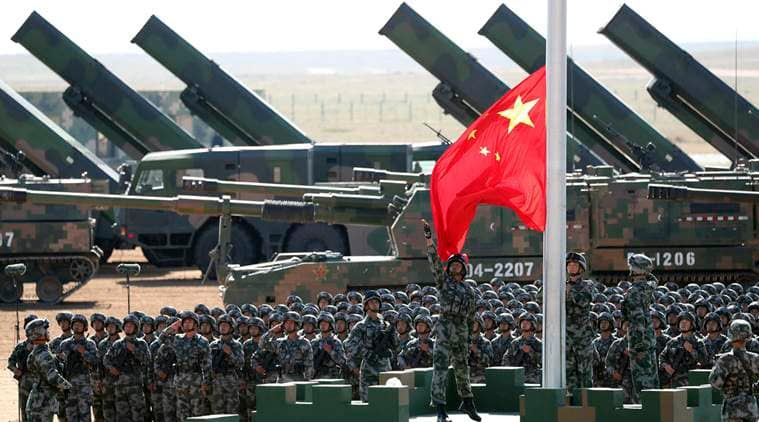 China’s military has deployed an increasingly sophisticated propaganda machine to make sure that promise stays top of mind.
With stealth jets entering service, leaked pictures of new high-tech naval artillery and proud reports of manoeuvres that “dare to shine the sword,” China’s armed forces are putting on a show of power as they lobby for greater defence spending.
Although it is the world’s largest military, the People’s Liberation Army has been privately unhappy that it got less than double-digit funding increases the past two years. It has recently been making the case that it needs more money to deal with increased global uncertainty, diplomats and several sources with ties to the armed forces say.
In the run-up to the defence budget’s release at the annual meeting of China’s parliament next week, state media outlets have been filled with coverage of military drills, advanced new equipment and thrilling tales of derring-do in a new film very loosely based on China’s evacuating people from Yemen’s civil war in 2015.
The overall message is clear: China faces serious challenges, from US President Donald Trump’s threats of force against nuclear-armed North Korea to an increasingly tense border dispute with India and what Beijing sees as efforts by self-ruled Taiwan to assert its sovereignty.
Confronting those challenges requires cash, a point the military is now trying to drive home. “If you keep telling your people China is facing all these threats, you have to be able to back it up to show you are spending enough,” said a senior Beijing-based Western diplomat.
President Xi Jinping promised in his keynote speech to the Communist Party Congress in October to make China’s armed forces world-class by the middle of the century. The military has deployed an increasingly sophisticated propaganda machine to make sure that promise stays top of mind.
A professionally shot air force video released to celebrate the Lunar New Year this month entitled “New fighters of the great power to safeguard the new era” led with footage of the latest fighter to enter service, the J-20 stealth jet, designed as a counterpart to the radar-evading the Lockheed Martin F-22 Raptor. “It looks like they are making the case for a large rise in defence spending,” said an Asian diplomat, speaking of the recent uptick in military-related stories in China.
Nervous neighbours
China’s defence spending is only about one-quarter that of the United States, if official figures are accurate. China has repeatedly said that it has no hostile intent, that its military is for defensive missions, and that defence spending is transparent. Many of the country’s neighbours beg to differ, calling out what they see as Chinese sabre-rattling as it ramps up drills in the region.
Vietnam, one of the most vocal opponents of China’s South China Sea claims, has tightened its military relationship with the United States. Taiwan has pledged to grow defence spending, and wants to buy new, advanced US equipment. The official People’s Liberation Army Daily said this month that although China was committed to a defensive military policy, it had to “dare to shine the sword” with air patrols far from China’s coast, whether close to Taiwan or over uninhabited islets disputed with Japan in the East China Sea.
Such flights, it said, protected China’s “bottom line” on strategic issues. One source with ties to the military said another pressing area for more spending was salaries, which have not kept up with those of private-sector workers. “Simply relying on ‘the great Xi to lead us to victory’ won’t cut it,” the source said, referring to efforts to recruit the best and the brightest into the military by appealing to national pride.
Between the lines
The defence budget will only disclose a top-line number, with a percentage comparison to the previous year. No breakdown on spending is provided. Last year, China’s parliament did not initially release the figure, sparking questions over transparency. But when it did, the budget increase was 7 percent, the smallest in more than a decade.
The budgeted increase of 7.6 percent for 2016 was the lowest in six years and the first single-digit rise since 2010, following a nearly unbroken two-decade run of double-digit increases. Experts say the true figure is likely much higher than what is officially reported, with money for some military projects included in ostensibly non-military spending.
“Particularly given China’s civil-military integration, it is difficult to know where defence spending ends” and civilian research and development begins, said another Western diplomat, who analyses China’s military. Some defence experts say that China is eroding the United States’ military technology dominance and that the People’s Liberation Army could surpass the US military in artificial intelligence capabilities, which have become a spending priority for Beijing.
But in the absence of transparency about new technologies, such as an experimental electromagnetic railgun state media suggested this year was being tested aboard a Chinese warship, there is skepticism about their combat readiness. China has not fought a war since 1979, a brief invasion of Vietnam that ended badly for China.
China’s Defence Ministry declined to comment ahead of the figure being released by parliament. The general percentage rise is typically given the day before parliament opens, and the raw figure the next day. Parliament opens March 5.
For all the latest World News, download Indian Express App
Publicado por salud equitativa en 4:01