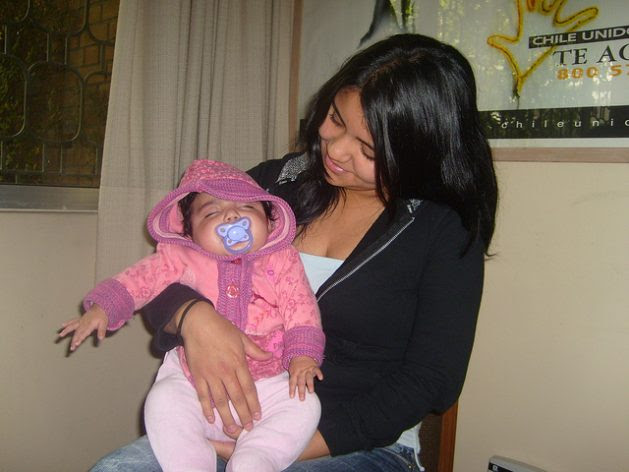 Teenage mom with her baby. Credit: IPS
SANTO DOMINGO, Dominican Republic, Dec 19 2017 (IPS) - A few years ago, someone shared a video with me that deeply impacted me. It was called “The Girl Effect”. In three minutes, the video demonstrates the fate of millions of girls and teenagers around the world.
Years later, when I arrived in the Dominican Republic and studied its challenges in terms of human development, I remembered that video and concluded that if the Dominican Republic does not resolve the problem of teenage pregnancy, despite its high sustained economic growth, its important social transformation and its modernization, it will never reach the Sustainable Development Goals by 2030.
A few days ago, the United Nations Development Programme (UNDP) launched its 2017 National Human Development Report for Dominican Republic devoted to this topic. This report is complemented in turn by another report presented by UNICEF and the World Bank in August and also by the report presented in November by the National Statistics Office (ONE in Spanish) and the United Nations Population Fund (UNFPA).
The three documents make up a global and coherent product of a sinister reality. Two out of 10 women between the ages of 15 and 19 in the Dominican Republic have been pregnant or have been mothers; representing 15.9% of the country’s population. Surely it will be a higher percentage given that pregnancies begin to occur as early as twelve years of age.
The causes of this sinister reality, briefly described, are multiple; but its consequences are clear: low or very low quality of life, poor welfare, recurrent poverty, exclusion.
The link between poverty and child and teenage pregnancy is clear, and the UNDP National Human Development Report shows that the mentioned link is to be found in the opportunity cost that teenage pregnancy represents for the human development of these young women. That is, the opportunities that they lose as a consequence of those early pregnancies or maternities.
This reality, I insist sinister indeed, worsens when considered that it has an equally quantifiable impact on the young pregnant woman, on the family environment of the pregnant girl or teenager and of course also on the child, the product of that pregnancy.
We are talking about half of the population of the country. The good news, however, is that the spooky effects of teen pregnancy are not necessarily irreversible.
The trend could be reversed if a new architecture of policies that affect and integrate prevention is urgently introduced, as well as the mitigation of the effects of pregnancy through care and protection policies. Policies that ensure greater opportunities.
A new architecture with a multidimensional character, that reaches the local level (territorial approach) and is implemented over time.
If the above is adopted and introduced soon, the possibilities of complying with the commitments acquired by the State can be fulfilled. If it is not the case; I am afraid that we will be talking about a country with a half future. The one of the privileged half of the population.