The Political Responsibility in the Collapse of Our Planet 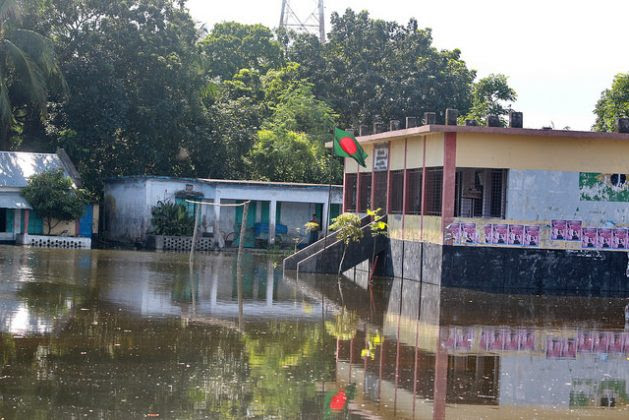 The premises of a school inundated by floodwater. Shibaloy in Manikganj district, Bangladesh. Credit: Farid Ahmed/ IPS
ROME, Dec 27 2017 (IPS) - On 20 December, Europe’s 28 Ministers of Environment met in Brussels, to discuss the plan for reducing emissions prepared by the Commission, to comply with the Paris Agreement on climate change. Well, it is now clear that we have lost the battle in keeping the planet as we have known it. Now, of course, this can be considered a personal opinion of mine, devoid of objectivity.
Therefore I will bring a lot of data, history and facts, to make it concrete. Data and facts have good value: they focus any debate, while ideas do not. So those who do not like facts, please stop reading here. You will escape a boring article, as probably all of mine are, because I am not looking to entertain, but to create awareness. If you stop reading, you will also lose a chance to know our sad destiny.
As common in politics now, interests have won over values and vision. The ministers decided (with some resistance from Denmark and Portugal), to reduce Europe’s commitment. This is going in the Trump direction, who left the Paris Agreement, to privilege American interests, without any attention to the planet. So, Europe is just following.
Of course, those alive now will not pay any price: the next generations will be the victims of a world more and more inhospitable. Few of the people who made to Paris in 2015, solemn engagements in the name of all humankind to save the planet, will be alive 30 years from now, when the change will become irreversible. And it will be also clear that humans are the only animals who do not defend nor protect their habitat.
While we talk on how to reduce the use of fossils, we are doing the opposite. At this very moment, we spend 10 million dollars per minute, to subsidize the fossils industry. Just counting direct subsidies, they are between 775 billion dollars to 1 trillion, according to the UN

First of all, the Paris’ Agreement was adopted by the 195 participating countries, of which 171 have already subscribed to the treaty, in just two years. Which is fine, except that the treaty is just a collection of good wishes, without any concrete engagement.


To start with, it does not set up specific and verifiable engagements. Every country will set its own targets, and will be responsible for its implementation. It is like to ask all citizens of a country to decide how much taxes they want to pay, and leave to them to comply, without any possible sanction.
Europe engaged in Paris in 2015, to reach 27% of renewable energies (by scaling down the use of fossils), fixing a target of 20% for 2020. Well, from 27%, it went down to 24.3%. In addition, the ministers decided to keep subsidies for the fossils industry, until 2030 instead of 2020, as planned. And while the proposal of the Commission was that fossils plants would lose subsidies if they did not cut their emissions to 500 grams of CO2 per ton by 2020, the ministers extended subsidies until 2025.
Finally, the Commission proposed to cut biofuels (fuels made with products for human consumption, like palm oil) to 3.8%. Well, the ministers, in spite of all their declarations about the fight against hunger in the world, decided to double that, at 7%.
Now let us go back to the real flaw of the Paris Agreement. Scientists took two decades to conclude with certitude that climate change is caused by human activities, despite a strong and well financed fight by the coal and fuel industry, to say otherwise.
The International Panel on Climate Change, is an organization under the auspices of the UN, whose members are 194 countries, but its strength comes from the more than 2.000 scientists from 154 countries who work together on climate. It took them from 1988, (when the IPCC was established), to 2013, to reach a definitive conclusion: the only way to stop the planet deteriorating more rapidly, emissions should not exceed 1.5 centigrade over what was the Earth’ temperature in 1850.
In other words, our planet is deteriorating already, and we cannot revert that. We have emitted too much gas and pollution, that are at work already. But by halting this process, we can stabilize it, but never cancel what we did cause, at least for thousands of years.
The Industrial revolution is considered to start in 1746, when industrial mills replaced individual weavers. But it started in great scale in the second half of the 19th century, with the second industrial revolution.
This involved the use of science in the production, by inventing engines, railways, creating factories, and other means of industrial production. We started to register temperatures in 1850, when this was done with thermometers.
So, we can see how coal, fossils and other fuels started to interact with the atmosphere. What the scientists concluded was that if we went over 1,5 centigrade of the 1.850’s temperature, we would irreversibly cross a red line: we will not be able to change the trend, and climate will be out of control, with very dramatic consequences for the planet. 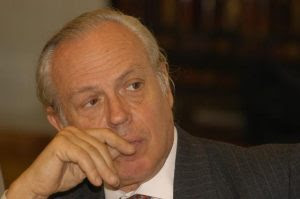 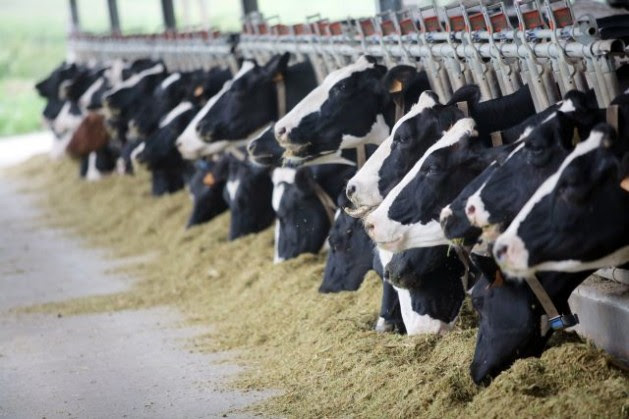 Holstein cows in a feedlot. Credit: Bigstock
And now, let us bring a last dirty secret, to show how far we are from really addressing the control of our climate. In addition to what we said, there is a very important issue, that has even been discussed in Paris: the agreements are entirely about the reduction of emissions by the fossils’ industry. Other emissions have been left entirely out.
Now, a new documentary, the Cowspiracy: The Sustainability Secret, produced by Leonardo di Caprio, has ordered several data presented by vegans, on the impact of animals in the climate change. They are considered somehow exaggerated. But their dimensions are so big, that they add anyhow another nail to our coffin.
Animals emit not CO2, but methane which is at least 25 % more damaging than C02. There is recognition by the UN, that while all means of transportation, from cars to planes, contribute to 13% of emissions, cows do with 18%…
And the real problem is the use of water, a key theme that we have no way to address in this article. Water is considered even by military strategist to be soon the cause of conflicts, as petrol has been for a long time.
One pound of beef uses 2.500 gallons of water. That means that a hamburger is the equivalent of two months of showers…! And to have 1 gallon of milk, you need 100 gallons of water. And people worldwide, use one tenth of what cows need.
Cattle uses 33% of all water, 45% of the earth, and are the cause of 91% of the Amazon deforestation. They also produce waste 130 times more than human beings. Pig raising in the Netherlands is creating serious problems because theirs waste acidity is reducing usable land. And consumption of meat is increasing in Asia and Africa, very fast,it is considered a mark of reaching the choices of rich societies.
Beside this serious impact on the planet, there is also a strong paradox of sustainability for our human population. We are now 7.5 billion people, and we will reach soon 9 billion. The total food production worldwide could feed 13 to 14 billion people. Of this a considerable part goes wasted, and does not reach people (theme for an article by itself). But the food for animals could feed 6 billion people.
And we have one billion people starving. This is proof how far we are from using resources rationally for the people living on earth. We have enough resources for everybody, but we cannot administer them rationally. The number of obese has reached the number of those starving.
The logical solution in this situation would be to reach an agreement on a global governance, in the interest of the planet of humankind. Well, we are going in the opposite direction. The international system is besieged by nationalism, who make increasingly impossible to reach meaningful solutions. 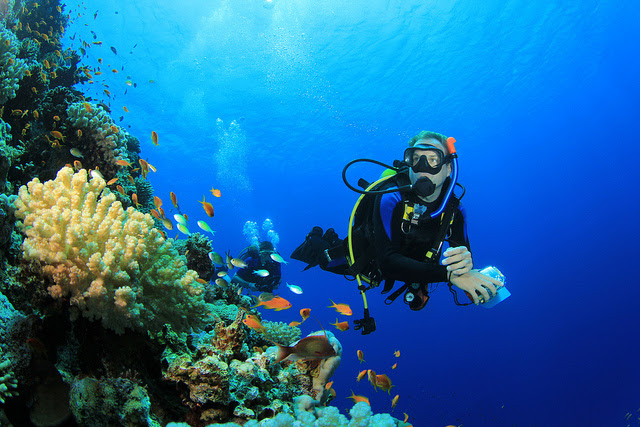 Globally, 75 percent of coral reefs are under threat from overfishing, habitat destruction, pollution and acidification of the seas due to climate change. Credit: Bigstock
Let us conclude with a last example: overfishing. Its now two decades that the World Trade Organization (which is not part of the UN, and was built against the UN) tries to reach an agreement on over- fishing with mega nets, who scoop up an enormous quantity of fishe: 2.7 trillion, of which they keep only one fifth, and they throw back four fifth.
Well, at the last WTO conference on the 13 December in Buenos Aires, governments were again not able to reach an agreement on how to limit illicit fishing. Big fishes are now down at 10% of 1970.And we are exploiting one third of all stocks.
It is estimated that illegal fishing puts between 10 billion and 23 billion on the black market, according to a study by 17 specialized agencies, with a full list of names. And again, governments spend 20 billion per year to finance the increase of their fishing industry…another example of how interest win on the common good.
I think now we have enough data, to realize the inability of governments to take seriously their responsibilities, because they have the necessary information to know that we are going toward a disaster.
In a normal world, Trump’s declaration that Climate control is a Chinese hoax, and it is invented against the interest of United States, should have caused more global emotion.
Also, because while Trump’s internal policies are an American question, climate is affecting all the 7.5 billion in the planet, and Trump was elected by less than a quarter of eligible voters: nearly 63 million. Too little to take decisions which affect all humankind.
And now European ministers are following, as a proverb says, money speaks and ideas murmur.. And there are many who are preparing to speculate on climate change. Now that we have lost 70% of the ice of the North Pole, the maritime industry is gearing to use the Northern Route, which will cut cost and time by a 17%.
And the British wine industry, since the warming of the planet, is increasing production by 5% each year. The vineyards planted in Kent or Sussex, with a calcar soil, are now bought from producers of Champagne, who plan to move there. The UK is already producing 5 million bottles of wine and sparkling wines, which are all sold. This Christmas, local sparkling wine will exceed champagnes, caves, prosecco and other traditional Christmas drinks.
We have all seen, at no avail, the increase of hurricanes and storms, also in Europe, and a record spread of wildfires. The UN estimates that at least 800 million people will be displaced by climate change making uninhabitable several parts of the world. Where they will go? Not to the United States or Europe, where they are seen as invaders.
We forget that the Syrian crisis came after four years of drought (1996-2000) which displaced over a million peasants to the towns. The ensuing discontent fuelled the war, with now 400.000 dead and six million refugees.
When citizens will awake to the damages, it will be too late. Scientists think that it will become clearly evident after thirty years. So why do we worry now ? That is a problem for the next generation, and companies will continue to make money until the last minute, with complicity of governments and their support,so, let us ride the climate change tide.
Let us buy a good bottle of British champagne, let us drink it on a luxury cruise line over the Pole, and let the orchestra play, as they did in the Titanic until the last minute!