Perpetrators of Crimes against Humanity Must be Brought to Justice

Print | Send by email
GENEVA, Dec 20 2017 (IPS) - On the occasion of the 2017 International Day of Human Solidarity observed on 20 December, the Chairman of the Geneva Centre for Human Rights Advancement and Global Dialogue Dr. Hanif Hassan Ali Al Qassim calls for peace for and human solidarity with, the Rohingya minority in Myanmar. 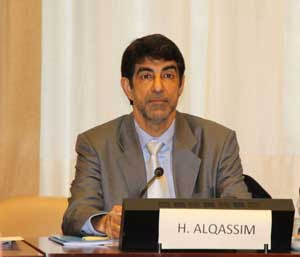 The Chair of the Geneva Centre emphasized that the forcible expulsion of more than 600,000 Rohingya from Myanmar to neighbouring Bangladesh has aggravated the dire human rights and humanitarian situation of the Rohingya.
He remarked inter alia that international decision-makers, members States of the United Nations and NGOs have a “moral responsibility to stand in solidarity with the Rohingya minority in Myanmar and other persecuted people worldwide.”
In this regard, Dr. Al Qassim stated that “the Geneva Centre took the initiative on 11 and 12 October 2017 to call upon the members of the Human Rights Council of the United Nations to hold a special session in solidarity with the Rohingya people and to address the situation in Myanmar.
“Our call for peace, solidarity and justice in Myanmar was heard; on 5 December 2017 a special session was convened at the United Nations Office in Geneva to identify a common platform to end the atrocities committed on the Rohingya people guided by the principles of justice and human solidarity. It is only through joint action and human solidarity that world society can respond with a unified voice to address the plight of the Rohingya people in Rakhine State and in Bangladesh,” stated Dr. Al Qassim.
Although the holding of the special session on the human rights situation of Rohingya Muslim population and other minorities in the Rakhine Sate of Myanmar reached its objective, the world society must keep its gear high in calling for peace and social justice. Dr. Al Qassim added:
“Our efforts to address the situation in Myanmar will be in vain if the international community limits its action to include the adoption of resolutions and declarations in support of the Rohingya people.
“Endemic poverty, violence and stark inequalities remain high in Rakhine State. Once the Rohingya refugees start to return to their home societies as envisaged in the ‘Arrangement on Return of Displaced Persons from Rakhine State’ signed on 23 November between Bangladesh and Myanmar which presupposes that it will become safe for them to do so, the main task will lie in rebuilding a safe, stable and inclusive society for all.
“The Rohingya people and other minorities in Rakhine State must be allowed to enjoy full and unconditional legal protection and fundamental freedoms. I appeal to the government of Myanmar to review and revoke the 1982 Citizenship law that degrades the status of the Rohingya people and other minorities to second-class citizens. All citizens of Myanmar are entitled to enjoy equal and inclusive citizenship rights,” stated Dr. Al Qassim.
In conclusion, he added that perpetrators of crimes against humanity must be brought to justice. Strengthening accountability and transitional justice in post-conflict Myanmar are imperative to end impunity and bring peace and stability to the region.
“Myanmar must take its future into its own hands and address all human rights concerns deriving from the current situation in Rakhine State. Decision-makers in Myanmar must remain committed to developing a peaceful and inclusive society in which the Rohingya people and other minorities are considered as integral components of the society of Myanmar and the international community must continue to assist victims to ensure their livelihoods and Bangladesh to enable it to be in a position to provide them with decent shelter,” concluded Dr. Al Qassim.