Food Sovereignty as a Pillar of Self-Determination | Inter Press Service

Food Sovereignty as a Pillar of Self-Determination | Inter Press Service

Food Sovereignty as a Pillar of Self-Determination

Print | Send by email
Brooke Takala describes herself as a mother, a PhD candidate at the University of the South Pacific, and co-coordinator of an Enewetak NGO called Elimon̄dik 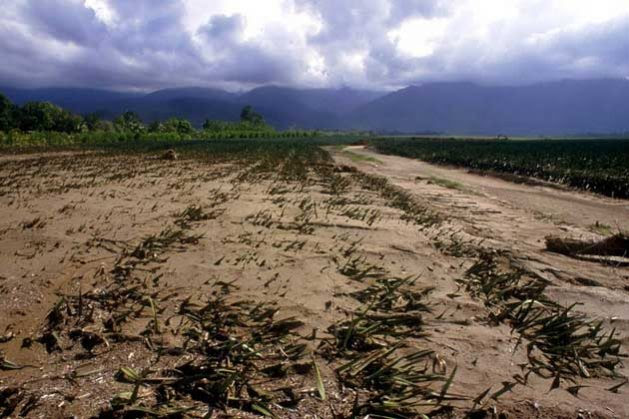 Climate change has serious implications for agriculture and food security. Credit: FAO/L. Dematteis
SUVA, Fiji, Dec 8 2017 (IPS) - A recent meeting in Rome between our Pacific leaders and UN Food & Agriculture Organisation (FAO) highlighted the urgency of food security in our region given the reality of climate change affecting our agriculture and aquaculture.
As a mandate of FAO to “promote the uptake of healthy fresh food,” they are missing their mark by discussing climate change as the main challenge to hunger elimination and nutrition in the Pacific.
While food security – simply, access to food sources – is an imperative to eradicate hunger, what we really need to be discussing is food sovereignty.
The Declaration of Atitlan, established at the first Indigenous Peoples’ Global Consultation on the Right to Food and Food Sovereignty in 2002, defines food sovereignty as “the right of Peoples to define their own policies and strategies for sustainable production, distribution, and consumption of food, with respect for their own cultures and their own systems of managing natural resources and rural areas.”
As such, food sovereignty must be recognized as a prerequisite for food security.

Enewetak Case Study
In the Pacific, life is dramatically different between urban and rural areas. In larger cities or townships, life is expensive and land and water resources for agriculture is limited and often polluted. In rural areas and outer islands life is mostly subsistence living, relying on what the land, waterways and sky provide.
Yet on some outer islands in places like the Republic of the Marshall Islands, food sovereignty does not exist. Nearly 600 miles from the capital of Majuro, the people of Enewetak lived sustainably for thousands of years before colonization disrupted lifeways.
Now contamination of Enewetak from the United States’ 43 nuclear and thermonuclear weapons along with the dumping of radioactive waste in open bomb craters, direct sea dumping, and more (in)famously the Cactus Dome on Runit Island, have left the people who call Enewetak home no choice but to subsist on contaminated food supplies and imported processed foods.
The United States may say that the Supplemental Food Program under the amended Compact of Free Association addresses food security for the people of Enewetak, but what happens when the small amounts of processed foods are depleted and the supply ship is delayed?
What happens when there is an event such as a birthday, funeral, or festival where local foods are essential to cultural practices? In those cases the community has no choice but to gather local foods from radioactive islands.
I only fully understood this a few years ago when we moved back to Enewetak with our young children. We had run out of nearly all food stocks and the boat was still weeks away from delivering its next shipment. Like many other families, we were boiling pandanus keys for the kids to eat in the morning and afternoon, then making one small meal in the evening.
We enjoyed the sweet and filling fruit but it was difficult not to think about the amount of Cesium and other radionuclides my children were consuming. The only choice was to eat the fruit or go hungry.
Not Just Climate Change
Other mothers in the Pacific face similar decisions when it comes to feeding their children. More than 300 nuclear and thermonuclear weapons were tested in the Pacific by the US, UK, and France.
Increasing military build-up in this vast blue continent includes the detonation of depleted uranium missiles, trans-shipment of nuclear and other hazardous waste, and nuclear submarines navigating the region.
Moreover, the extractives industry compromises land and water resources and fuels genocide of Pacific peoples in places like West Papua. Now, we have the increasing threat of seabed mining, which will undoubtedly affect our greatest food source in the Pacific: the Ocean.
Food security in the Pacific can only be achieved by enabling self-determination movements in the region, thereby recognizing the driving elements that impede food sovereignty and food security. Effects of climate change – rising seas, extreme drought, and typhoons – are extensions of the over-arching geo-political factors that only exacerbate the issues that people of Large Ocean States have been living with for generations.
Commitment is Needed
In 2006, Indigenous communities coordinated with FAO to develop indicators around food security and food sovereignty. While these indicators recognize the obstacle of environmental contamination, no formal processes for remediation of contaminants have been institutionalized.
If FAO is truly committed to food security, their coordinated efforts with the Pacific must be underpinned by the acknowledgement of historical factors that have disrupted the self-determination of Pacific families.
Not only should a full and comprehensive survey of food sources be conducted in cooperation with Pacific communities and neutral states (i.e. non-nuclear states), but also a remediation policy must be required for food security initiatives, along with recognition of the negative effects of militarization and the extractives industry on Pacific lifeways and worldviews.
This article is part of a series about the activists and communities of the Pacific who are responding to the effects of climate change. Leaders from climate and social justice movements from around the world are currently meeting in Suva, Fiji, through 8 December for International Civil Society Week.