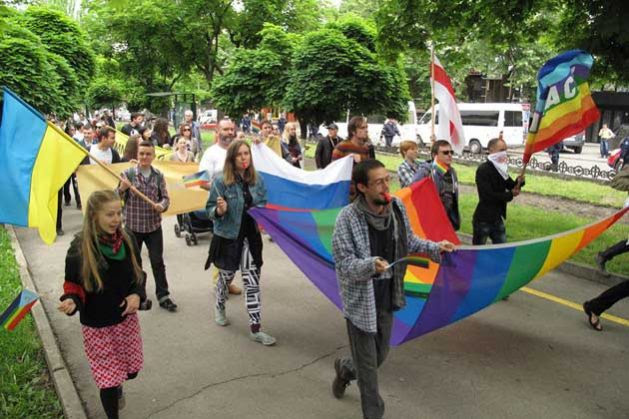 Lesbian, Gay, Bisexual, Transgender and Intersex (LGBTI) pride march. Credit: OHCHR/Joseph Smida
SUVA, Fiji, Dec 7 2017 (IPS) - Cancun, Mexico, of white sand beaches and spring break-style nightlife, was, this past June, the unusual backdrop for a regional gathering on human rights and democracy.
Tour buses accustomed to ferrying sandal-shod tourists to Mayan ruins, instead, transported well-heeled activists and government representatives from their hotels to the Centro de Convenciones.
Parked a few kilometers away, one bus, neon orange and passenger-less, stood out. The so-called “Freedom Bus” was emblazoned with massive letters; “Leave our children alone!” #dontmesswithourchildren.
It was, according to its organizers, designed to get the attention of delegates attending the General Assembly of the Organization of American States (OAS). They wanted attendees to know they were putting themselves on the line to resist all attempts by permissive governments to indoctrinate their children in the immoral principles of “gender ideology.” They were, they insisted, defending their religious and freedom of speech rights.
Never mind that there is no “gender ideology,” much less governments that are forcing children to learn inappropriate material. This bus is just one of many recent direct-action attempts by right-wing organizations to pedal a falsehood that governments, aided by well-endowed liberal foundations, are out to get your children.
The bus provides the arresting visual, but it’s what takes place inside the conference center that should raise our hackles. The concern for the wellbeing of children is a cover; what these organizations want to do is disable efforts to advance protections and rights for girls, women and LGBTI people.
The movement, which defines itself as in opposition to “gender ideology,” is a response to progress made in the last decade advancing human rights for vulnerable populations.
Meanwhile, the decade has also seen an increase in the organizing power and political influence of conservative evangelical churches, especially in Central America, Mexico, and Brazil.
Latin America is the locus for much of the progress on LGBTI and abortion rights, both at the country and regional level. Same-sex marriages are legal in Argentina, Brazil, Colombia and Uruguay.
And significant advances have been made to increase access to legal abortion in Argentina, Chile, Mexico City, Colombia, Bolivia and Uruguay. At the regional level, the OAS has been a champion for LGBTI rights as early as 2008, when it adopted its first resolution condemning violence and discrimination based on sexual orientation and gender identity.
By 2011, the OAS had created a dedicated LGBTI Unit at the Inter-American Commission on Human Rights. The progress did not go unchallenged.
Opponents of sexual and reproductive rights and LGBTI rights in Latin America responded to victories directly, through both legislation and litigation. They also responded in more insidious ways.
Last year, in Brazil, ministries promoting equal rights for women and black communities were downgraded when they were folded into the Ministry of Justice, effectively neutralizing the ability of its leadership to negotiate or move forward any progressive policies.
The deliberate dismantling of government infrastructures that protect human rights is not endemic to Brazil. Indeed, it is a dedicated strategy of anti-rights organizations who are working to both coopt and fragment these spaces.
The OAS experienced this most fiercely at its 2013 General Assembly in Guatemala. For the first time this forum, which is historically a leader in advancing human rights, witnessed a coordinated movement forcefully agitating against reproductive and LGBTI rights.
Not coincidentally, it was also the year the OAS approved a convention against all forms of intolerance, racism and racial discrimination, which included protections for LGBTI people.
The following year, at the 2014 General Assembly in Paraguay, these same groups weren’t just oppositional to proposed human rights resolutions. They attempted to create new policies they claimed were rights-based, but were in fact camouflage to take away rights.
A proposed “family policy” included protection of life from conception, a well-used strategy to prevent access to abortion. Each subsequent assembly has been marked not just by the higher profile and activism of anti-rights groups, but also by a decrease in civility.
By the time of the 2016 General Assembly in the Dominican Republic, their ire was directed at transwomen. They felt sufficiently empowered to harass and intimidate transwomen who attended the Assembly as they entered women’s restrooms. Still, it’s clearly not sufficient to menace people inside the halls of diplomacy, but one must take the show on the road.
Cancun was not the first stop for the “Freedom Bus,” which had already made the rounds in Latin America, the United States, and Europe. The organized opposition to human rights plays out differently in each country context, but shared patterns of work are evident.
After identifying an opportunity to dismantle human rights mechanisms they see as favorable to women and LGBTI communities (women’s ministries, the OAS, etc.) they abandon facts and misrepresent the truth to advance an agenda that creates moral panic, and ultimately, that will motivate civil society and policy makers to support their regressive agenda.
These strong-arm tactics are shrinking the shared space for public discourse, and this is cause for alarm. They may have succeeded in raising their profile at the OAS, and enlisting conservative governments to support their agenda.
But they have not yet succeeded in shutting down the voices of progressives committed to human rights. The OAS continues to provide human rights activists and progressive governments the infrastructure to advance, and this must be preserved at all costs.
This article is part of a series about the activists and communities of the Pacific who are responding to the effects of climate change. Leaders from climate and social justice movements from around the world are currently meeting in Suva, Fiji, through 8 December for International Civil Society Week.